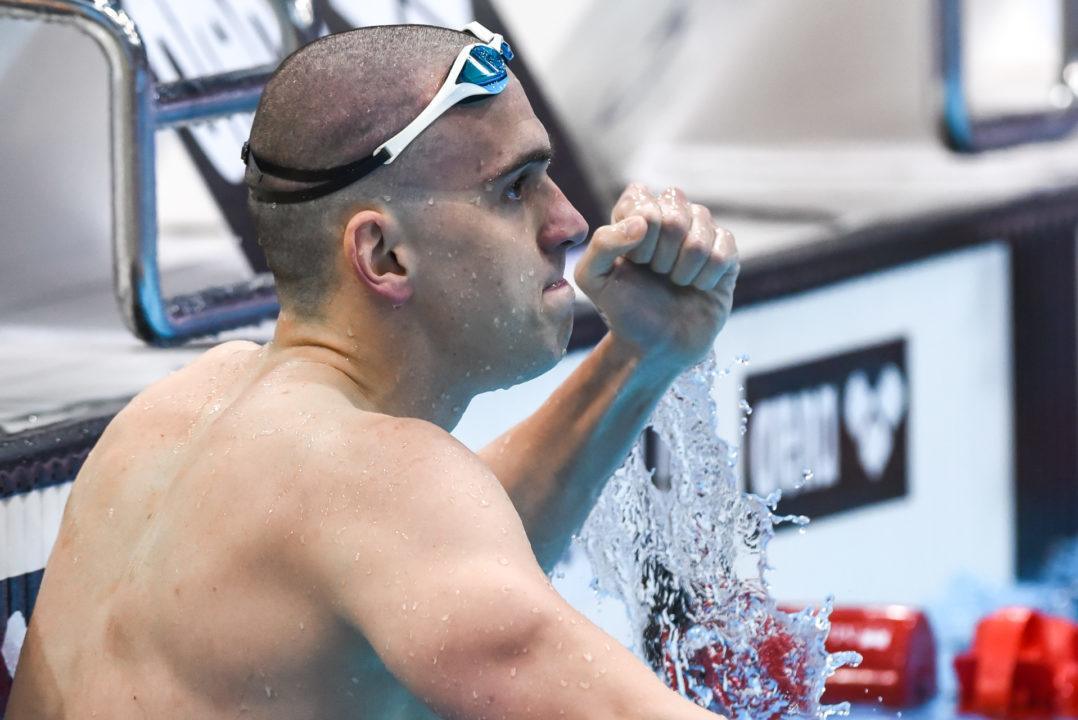 Hungary's Laszlo Cseh continued his European Championships hot streak on Saturday night, going 50.86 to take over the top world ranking for the season in the 100 fly. Archive photo via Peter Sukenik/www.petersukenik.com

Hungary’s Laszlo Cseh continued his European Championships hot streak on Saturday night, going 50.86 to take over the top world ranking for the season in the 100 fly.

The time also shaves .01 seconds off of Cseh’s own Hungarian national record in the event. He set the mark at a 50.87 at last summer’s World Championships in Kazan, winning the silver medal. That time would finish the season ranked third worldwide, behind only world champ le Clos (50.56) and American national champ Michael Phelps (who went 50.45 swimming at U.S. Nationals in the same week as Worlds).

Cseh won the European title handily, beating Poland’s Konrad Czerniak by about four tenths of a second. The Olympic frontrunners in the 100 fly are interestingly spread out very evenly over the major continental federations: Cseh is in Europe, le Clos in Africa, Phelps in the Americas and World Champs bronze medalist Joseph Schooling in Asia. Those were the only four men to break 51 seconds last season.

You forgot to mention that Czerniak also swam a great time – 51:22 ranks him 3rd in the world.

Old man CSEH is looking tough and just threw down the gauntlet for Rio. Hopefully he has a little more to improve on in two months.

I think Cseh has more cardiovascular gifts than Phelps, especially when you look at his stroke. Cseh may not be as affected by age as Phelps. I think Phelps has had the advantage with his freakish flexibility and stroke efficiency, but for someone who claims to be in 2008 shape, Phelps isn’t doing so well lately, especially in the 200s.

Not that I want it to happen, but I just think 2 meets (Trials & Rio) is too much for Phelps to put up good back to back meets… Read more »

Come on TOM…for someone who regular trolls the Phelps fans I would expect more from you. The argument, these two old guys only swim good at the big meets, is pretty weak. Especially considering the rankings. Most tapered swimmers don’t swim as fast as Phelps does without a taper in the 100m fly (51.38) and 200m IM (1:57.61) this year. His 1:56.11 in the 200m fly is lowest ranked best time of the season.

True, he isn’t swimming great times now, but better than he was last year heading up to that “one good meet” that he had which I believe to be a positive sign for him. He’s not doing these half/full tapers like everyone else mid year so… Read more »

In 2008, nobody could touch Phelps in-season times, even with a taper. Now Phelps needs a taper to get to the top. I am observing Phelps seems to have much consistency and many poor swims. “Poor” swims being relative in context, because the only question around Phelps is can he win another gold medal. I think his best chance is the 200IM, but Hagino should be tough (and now maybe Cseh).

My point about Phelps breaststroke (which making finals at Nationals is impressive) is the way he so easily through out the comment that he “sucked at breaststroke.” I am addressing his sense of confidence. In 2008, Phelps had a whole bag of tricks to unveil; a much improved breaststroke,… Read more »

I personally think there’s probably a big difference in Phelp’s confidence between 2016 and 2012. In 2012 he knew he hadn’t been putting in the training, which is no longer the case today. He also knows what he did at Nationals last summer and that his in-season swims this year are better than last and from a historical perspective actually pretty good minus the 200m free.

Looking at the 2007 in season times here are a few prior in season which are actually slower than what he’s been swimming in 2016. I just think at the time he was so far ahead of the competition that you remember it differently:

Any objective observer can see that Tom from Chicago is making valid points. Having a view that is different from a biased crowd is certainly not trolling. Anyway, he forgot to mention that it is not only gold medals that may elude Phelps in the Fly events. The way Le Clos, Cseh and Schooling are going at the moment, in both the 100m and 200m fly, means that Phelps may find himself shut out of the medals. His 200IM looks very solid and he is still the favourite for gold, with Hagino and Lochte his only real challengers. A medal there is assured, but if may not be gold.