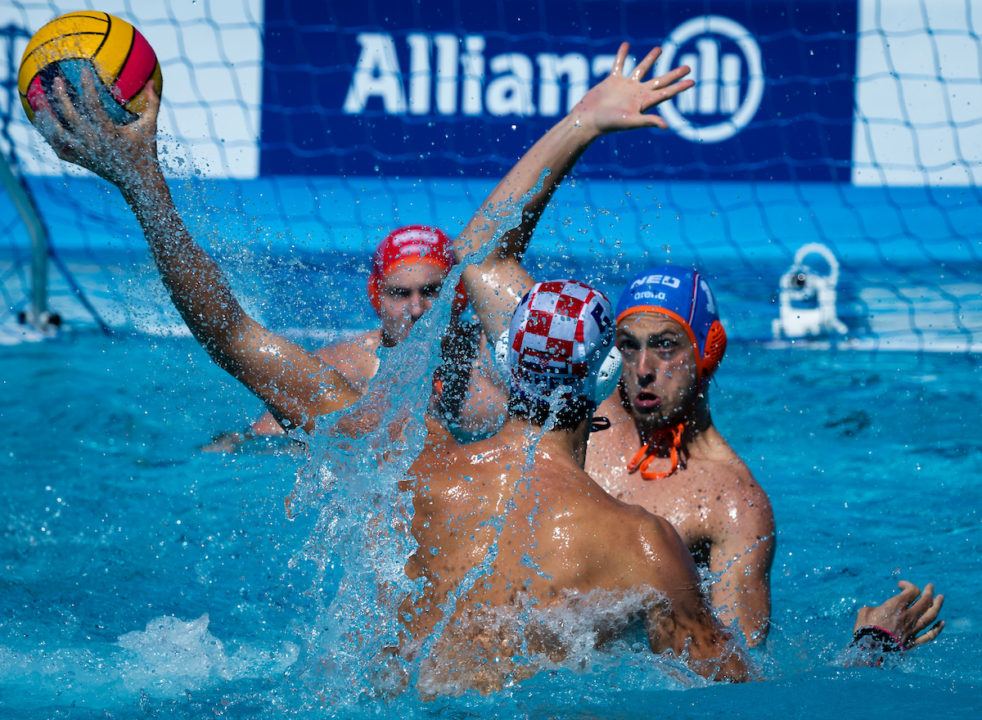 Italy, Hungary, Croatia and Serbia claimed the first four spots in the men’s water polo quarterfinals at the World Championships by winning their respective groups with victories on Friday.

Serbia topped Greece to finish 2-1, while the others moved to 3-0 with wins over Kazakhstan, South Africa and Germany respectively.

South Korea, Kazakhstan, New Zealand and Brazil were eliminated from medal contention as the fourth place team in their respective groups and will now play for 13th to 16th place.

Action continues on Sunday with four playoff matches: Montenegro vs. Australi, Greece vs. the United States, Spain vs. Japan and South Africa vs. Germany.

Serbia (2-1) took home the group title with a 9-3 win over Greece, while Montenegro (1-2) was second after a 24-6 win over South Korea.
Serbia led 3-1 after the opening stanza with three extra-man goals, including two by Strahinja Rasovic. Greece was within one twice (3-2 and 4-3), but trailed 6-3 at the half as Ognjen Stojanovic and Dorde Lazic made good on extra-man tries.

After a scoreless third quarter, Serbia finished the game on a 3-0 run with an action shot and a driving situation shot by Dusan Mandic and a center shot by Lazic (5:39).

Mandic led all scorers with four goals for Serbia, while Lazic scored twice. Serbian goalkeeper Strajo Risticevic stopped 84 percent of the shots he faced (16 of 19). Serbia put in 9 of its 28 shots, including 6 of 8 extra-man tries.

The game was never in doubt for Montenegro as the team raced out to a 10-1 advantage and later outscored Korea 14-4 in the second half of the 24-6 victory.

Korea scored its two first half goals at the 4:25 mark of the first quarter, an extra-man goal by Donghyeok Kim, and with two seconds to play in the second, an extra-man shot by Jaehoon Song. Aleksandar Ivovic scored three times in the first half for Montenegro, while Uros Cuckovic and Duro Radovic put in two goals.

Aleksa Ukropina and Nikola Murisic each scored twice to boost the Montenegro lead to 18-3 after three quarters. Ivovic poured on three more goals in the final stanza to close out the 24-6 win.

Ivovic scored six times for Montenegro, while Ukropina, Bogdan Durdic and Nikola Murisic turned in hat tricks among 10 scorers. Montenegro put in 24 of its 40 shots, including 4 of 4 extra-man tries and its lone penalty.

Seonuk Lee and Hyomin Han each scored twice for Korea. Korea made 6 of its 21 shots, including 2 of 3 extra-man tries.

Croatia finished an unblemished 3-0 with a 21-5 win over Kazakhstan, while the USA claimed second in the group with a 12-11 win over Australia.

Croatia scored the first six goals of the game and led 15-2 midway through the third quarter of its 21-5 win over Kazakhstan.

Maro Jokovic scored three times in the opening stanza to lead the Croatian charge. Andelo Setka also added three goals, while 10 players scored, including nine with multi-goal efforts. Croatia scored on 21 of its 37 shots, including 4 of 8 extra-man tries and 3 for 3 penalties.

Five different players scored for Kazakhstan as the team made 5 of 26 shots, including 2 of 3 extra-man tries. Maxim Zhardan, Roman Pilipenko, Miras Aubakirov, Murat Shakenov and Stanislav Shvedov put the Kazakhs on the board.

The United States outscored Australia 4-3 in an otherwise even match to claim a 12-11 win.

The Americans led 4-1 after 5:16 with two action shots, an extra-man shot and a center shot. Australia answered with an Andrew Ford center shot (2:19, 1st) and action shot by Lachlan Edwards (1:37) to pull within one after eight minutes of play.

The Aussies tied it up at 4 under three minutes into the second period. The teams then tied again at 5, before extra player shots by Johnny Hooper and Luca Cupido made it 7-5. The teams traded goals from there, until extra-man goals by Joe Kayes (20 seconds left in the 2nd) and Aidan Roach (41 seconds into the 3rd) knotted the score at 9. The teams were knotted at 10 and 11 as Australia answered each USA goal, before Cupido buried a 6-meter direct shot in a throw in situation with 1:17 to play. The Aussies had two more chances, but the first was saved and the second missed to end the game.

Cupido led the USA with a hat trick, while Hooper, Alex Obert and Hannes Daube added two scores apiece. The Americans put in 12 of their 33 shots, including 4 of 10 extra-man tries.

Kayes, Edwards, Roach and Younger each scored twice to lead seven Australian scorers. The Aussies hit 11 of 27 shots, including 7 of 11 extra-man opportunities. Goalkeeper Joel Dennerley saved 60 percent of the shots he faced (18 of 30).

Hungary cruised to a 23-5 win over South Africa to win Group C at 3-0, while Spain crushed New Zealand 23-3 to finish second. South Africa earned a spot in the playoffs over New Zealand, with both boasting a draw and two losses, on goal differential (-38 for South Africa, -40 for New Zealand).

Hungary led 9-1 after 13 minutes of play and never looked back en route to the 23-5 win over South Africa.

South Africa scored two goals in the final three minutes of the first half, only to see Hungary rattled off nine goals over the next nine minutes to make it 18-3. Hungary capped the win on a 3-0 run, including a penalty by Gergo Zalanki with 1:35 to play.

Zalanki notched five goals to pace Hungary, while 10 players scored. Krisztian Manhercz and Szilard Jansik added hat tricks. Hungary scored on 23 of its 40 shots, including 5 of 10 extra-man tries and 4 of 5 penalties.

Nardus Badenhorst led South Africa with two goals among four scorers. South Africa made 5 of its 19 shots, including 2 of 3 extra-man goals and one penalty.

Spain poured in 10 unanswered goals over the first 10 minutes of the game, going up 10-0 on a penalty shot by Marc Larumbe Gonfaus with 5:49 to play in the first half. New Zealand got on the board with an action shot by Rowan Brown with 4:16 to go in the stanza, only to see Spain close out the half with three more scores.

New Zealand scored its second goal with 4:34 left in the third quarter to make it 15-2 and the Spaniards countered with eight in a row. Louis Clark hit a counter attack with nine seconds to play to account for the final score for the Kiwis.

Alberto Barroso Macarro was 6-for-6 for Spain, while Alvaro Granados Ortega added four goals. Sergi Cabanas Pegado, Felipe Rocha Perrone and Blai Mallarach Guell put in three goals apiece for the Spaniards, which made 23 of 42 shots. The team was 7 of 11 in extra-man tries and 3 for 3 on penalties.

New Zealand was 3 of 30 in shots and failed on all six of its extra-man tries and its lone penalty. Brown, Clark and Nicholas Stankovich accounted for the team’s three scores.

Italy closed out group play at 3-0 with a 8-7 comeback win over Germany, while Japan edged Brazil 11-9 to finish third. Germany and Japan each finished with a win, a draw and a loss, but Germany was +6 on goal differential, while Japan was at 0.

Germany led 2-1 after the opening quarter, but Italy scored the final two goals of the game to steal away the 8-7 victory.

Italy trailed 4-2 midway through the second quarter, but got an extra-man goal by Francesco Di Fulvio and a center shot by Matteo Aicardi to tie it up 4-all at the half. Italy took the lead with a Stefano Luongo extra-man goal with six minutes to go in the third quarter. Germany tied it at 5 and 6 before taking the lead on a Mateo Cuk extra-man score with two seconds left in the stanza.

Italy knotted the score at 7 on a center shot by Pietro Figlioli with 5:11 to play, while Michael Bodegas put in the game winner, an extra-player goal with 2:18 to go.

Di Fulvio and Aicardi each scored twice for Italy, while four others notched a single goal. Italy scored on 8 of its 33 shots, including 4 of 9 extra-man tries.

Dennis Eidner notched a hat trick for Germany, while four others scored. Germany was 7 of 25 on shots, including 1 of 5 extra-man tries and 2-for-2 on penalties.

Japan outscored Brazil 5-1 in the second quarter to take a 7-3 lead at the half, giving the team enough cushion to hold on for the win despite a 6-4 scoring edge for Brazil in the final 16 minutes.

Tied 2-2 after the first quarter, Japan turned it on with five goals, three counter attacks and two action shots to go up by four at the half (7-3).

Down 8-3 after an action shot by Keigo Okawa less than a minute into the third quarter, Brazil began its comeback, slicing the margin to three at 8-5 and 9-6. Trailing 10-6 with eight minutes to play, Brazil scored three in a row with center shot goals by Gustavo Coutinho and Gustavo Guimaraes and an action shot by Ruda Franco to make it a one-score game at 10-9 with 4:01 to play. Japan put in an insurance goal, an action shot by Mitsuaki Shiga, with 56 seconds left to seal the game.

Shiga and Takuma Yoshida each turned in hat tricks for Japan, while Yusuke Inaba and Okawa added two goals apiece. Japan made 11 of its 34 shots, including 2 of 12 extra-man tries.

Guimaraes scored three times for Brazil, while six other players managed a goal apiece. Brazil made 9 of its 19 shots, but was 0-for-3 in extra-man tries. The team made its lone penalty.