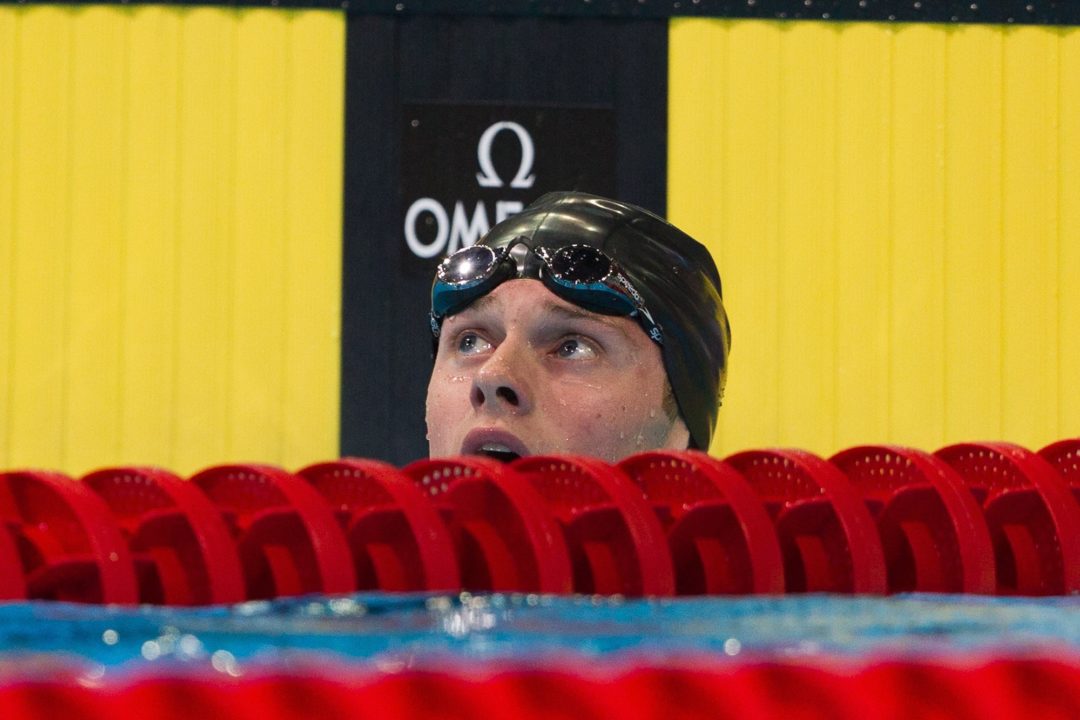 Jack Conger went another best time on Saturday as he wraps up his summer in Hawaii. (Photo Courtesy: ©Tim Binning/TheSwimPictures.com)

Day 3 of the 2012 Jr. Pan Pac Championships may not have been quite as attention-grabbing as was day 2, but with three Meet Records there was still plenty to buzz about in Hawaii.

The two, both great friends and great rivals, were deadlocked. But in the second-to-last 50, Chenault fell well off of her pace, almost as if she were winding up for a big closing kick. That kick never came, however, and even though she was solid coming home, the final gap doesn’t indicate how tight this race was throughout.

American Becca Mann, of the Clearwater Aquatic Team, won the B-Final in 4:11.54.

The young Horton has had huge success domestically, and is now expanding that beyond Australia’s borders (he already has an event win under his belt). He seemed to mis-time this race a little bit though; he closed in 26.72, which was more than a second faster than anyone else. He isn’t typically a strong finisher in the event, so he may have surprised himself with how much energy he had left. Expect something under 3:50 next season.

The Canadian women continued to support the bulk of their team’s scoring, as Noemie Thomas took their second gold medal in 59.02. She was a bit off of where she was expected to be at March’s Canadian Olympic Trials, but since then has just been ripping through her summer swim schedule. Including a huge 58.68 from prelims, she’s been faster than her swim from Trials 9 times this summer. That’s exciting to see as Thomas is one of Canada’s top young prospects.

Australia’s Brianna Throssell was 2nd in a personal best of 59.36, and Japan’s Rino Hosoda earned bronze in 59.49.

New Zealand narrowly missed their second medal of the meet with a 59.78 from Sophia Batchelor as the only other woman under the minute mark.

Katie Kinnear and Celina Li from the United States were 5th and 6th, respectively, in 1:00-mids.

Maclin Davis, the US High School Record holder in the 100 fly in yards, doesn’t have the same years of experience at big national and international level meet as most of the young American stars at this meet. For example, he didn’t swim a single Grand Prix meet this season.

But as he’s preparing for his freshman season at USC next year, he showed on Saturday night that he has no problem stepping up under pressure despite. He won this men’s 100 fly in 52.89, which is the 5th-fastest time by an American 17-18 year old in history.

Japan’s Daiya Seto took 2nd in 53.23, setting up a great medley relay for Sunday, and American Matt Ellis was 3rd in 53.59. Ellis could be a huge part of the United States’ future with his abilities both in this 100 fly, as well as the 100 free.

Kenta Hirai, in the midst of what has been a fantastic meet, stumbled a bit in this 100 fly with just a 53.72 for 4th; he was capable of at least a silver medal.

This swim was Stewart’s first time under 2:10 in the event; she’s just the 5th American that age or younger to ever clear that hurdle.

Japan’s Kana Ozeki was 3rd in 2:11.18 – just a tenth behind Jones. Canadian Sydney Pickrem was 4th in 2:11.42. Pickrem, though a Canadian citizen, lives and trains in Florida. No surprise – the 15-year old swimmer is another great young product of Randy Reese and the Clearwater Aquatic Team.

Jack Conger is good. Every time he hits the water, our phones here at SwimSwam light up with people marveling at his results. This was true again on this particular Saturday night, after he put up a 1:57.20 to win the men’s 200 backstroke, breaking the old Meet Record held by New Zealand’s Gareth Kean by half-a-second.

This swim was Conger’s lifetime best by a long-shot, and the third-best by a 17-18 in U.S. history. He built his second 100 meters perfectly, closing in 29.55 to run away from the field. Notably, in a long-standing back-and-forth virtual rivalry between Conger and Ryan Murphy (who is a bit younger, though both are in the same grade), this is better than Murphy’s amazing performances from the U.S. Trials.

Japan’s Keita Sunama was 2nd in 1:59.57, overtaking New Zealand’s Corey Main in 1:59.67. This is Main’s second medal of the meet; he’s a bit better in the 100, so gave up some ground on the back-half of this longer race. Nobody else in this race was under two minutes.

The American women just missed breaking the Meet Record in this 400 free relay; Simone Manuel, Olivia Smoliga, Cierra Runge, and Chelsea Chenault combined for the win in 3:41.04. Manuel, who has been fantastic this week, went another best time in this race with a 54.60. She remains as the number-two swimmer in 15-16 age group history, but pulls a bit closer to Missy Franklin. She now also moves into the top 10 Americans in 2012.

Australia was 2nd about 2.5 seconds back, and Canada was 3rd.

The American men took more than a second off of the Meet Record, set by Australia in 2009, with a 3:18.67. Their first three legs (Matt Ellis, Jack Conger, and Kyle Darmody) were all 49’s, and their anchor Peter Brumm just missed in 50.04.

This year’s Australian men were 2nd in 3:20.82, followed by Japan, Canada, Hong Kong, and New Zealand.

Manuel led off with a meet record on the relay.

Maclin won Jr Worlds last year in the 100 fly. He has more international experience than half the US team.

Huge swims from Smith, Stewart, and Conger. Looks like the men’s relay stepped up big time.

Freestyle is in very good hands in USA on the women’s side. Simone Manuel is a star in the making in the 50 free and in the 100 free. Leah Smith swims the meet of her life. Becca Mann is young and the big drops of time will probably come next year. I think she will swim a great 1500 free Sunday. Chelsea Chenault takes speed and it’s good for her best race the 200 free. With Allison Schmitt, Missy Franklin, Megan Romano, Lia Neal, Kristen Vredeveld, Katie Hoff (I hope she doesn’t retire), Dagny Knutson (I hope she will come back to show her big talent), Jasmine Tosky, Cierra Runge, Gillian Ryan and obviously Katie Ledecky I can say… Read more »

The canadians prepare a very good women’s 4X100 medley relay in the next years. They have Sinead Russell on backstroke, they have good breaststrokers, Noemie Thomas on butterfly, they have good freestylers so they could play medals in the future.