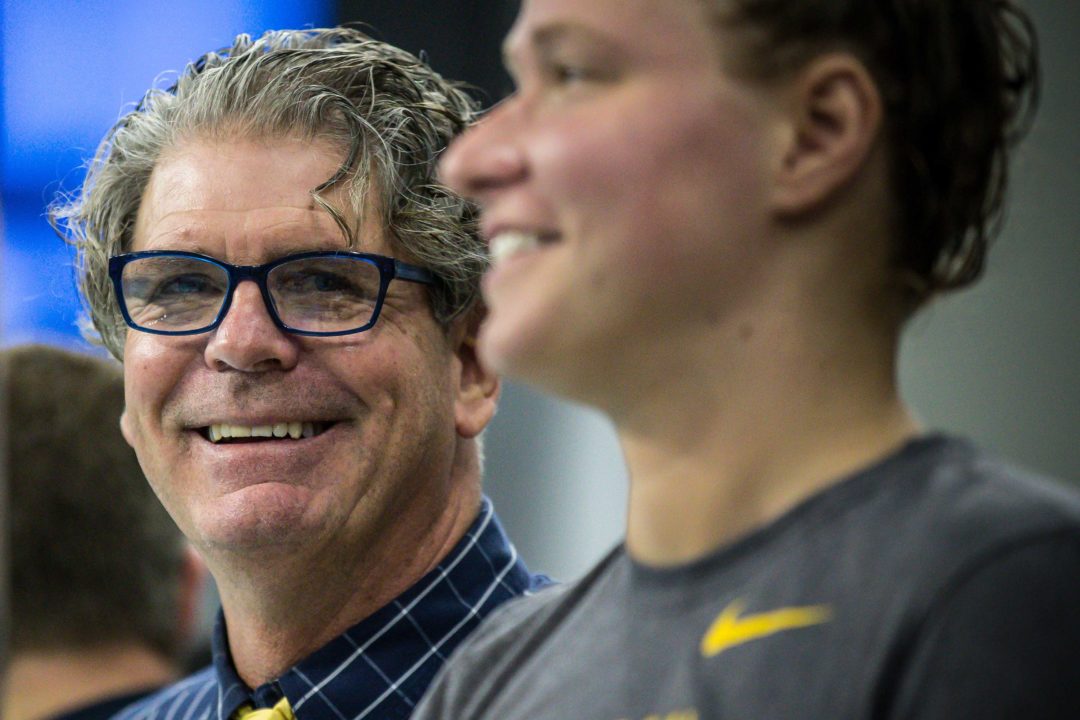 It was a solid month of competition for the Michigan Wolverines.

Coming off a month of July that saw freshman sensation Maggie MacNeil win Worlds gold in the 100 fly, the Wolverines kept things moving with a huge Charlie Swanson gold at Pan American Games.

Heading into this summer, Swanson’s career-best in the 400 IM was 4:14.01, and that in itself was a two-second drop. Swanson ranked 6th nationally that season. But at Pan Ams, he blasted a 4:11.046 that moves him to #2 in the nation, and won Pan Ams gold by a whopping 8 seconds.

Now if he only coached these athletes!

He is almost as good as the Tennessee Coach

Doesn’t he coach Smachlo and Tucker and MacNeil?

Swimming is changing. These large, Power 5 combined programs are huge operations, with 60+ athletes, half a dozen full-time coaches, GA, volunteers and a variety of support personal.

Some head coaches are shifting into a more CEO type role, which honestly, make a ton of sense. There is a lot to oversee. Hire good coaches and let them coach. If the head coach doesn’t pin themselves to one group, they are able to float, make the rounds, and avoid the “head coach doesn’t care about/talk to me criticism.”

In the end, a head coach is hired to oversee a successful program, not to make sure they are writing enough practices to satisfy the swimswam trolls.

True, but again, the skillset and current aptitude of a CEO is completely different than those of the coaches on the deck. Let’s face it, a surgeon who sits in meetings, recruits, etc. for a decade as CEO of a hospital wouldn’t be your go-to doc for an operation. You probably wouldn’t want to be in a foxhole with a general either. The point is, there is room for both, but the glory should be distributed to include those that are actually milking the talent out of these young athletes.

What other programs have this same model? Just curious.

Vote Up00Vote Down Reply
Just Cause

I can tell you for sure that you don’t know what you’re talking about. It’s OK to guess but if you’re not there at the hours long weekly staff meetings or watching how he analyzes every workout before its put out for the athletes than you shouldn’t be making these statements.

I realize “of the month” refers to August, but another Michigan swimmer who had a fantastic summer was Siobhan Haughey, who had best times in the 50-100-200 frees, missing out on the bronze in the 200 in Gwangju by only .2.

Well, in the 200 free, the top 3 contenders elected not to swim due to illnesses and relay obligations

She still had an amazing best time. Breaking 1:55 is a big deal.

Neither of which train with Coach Botttom