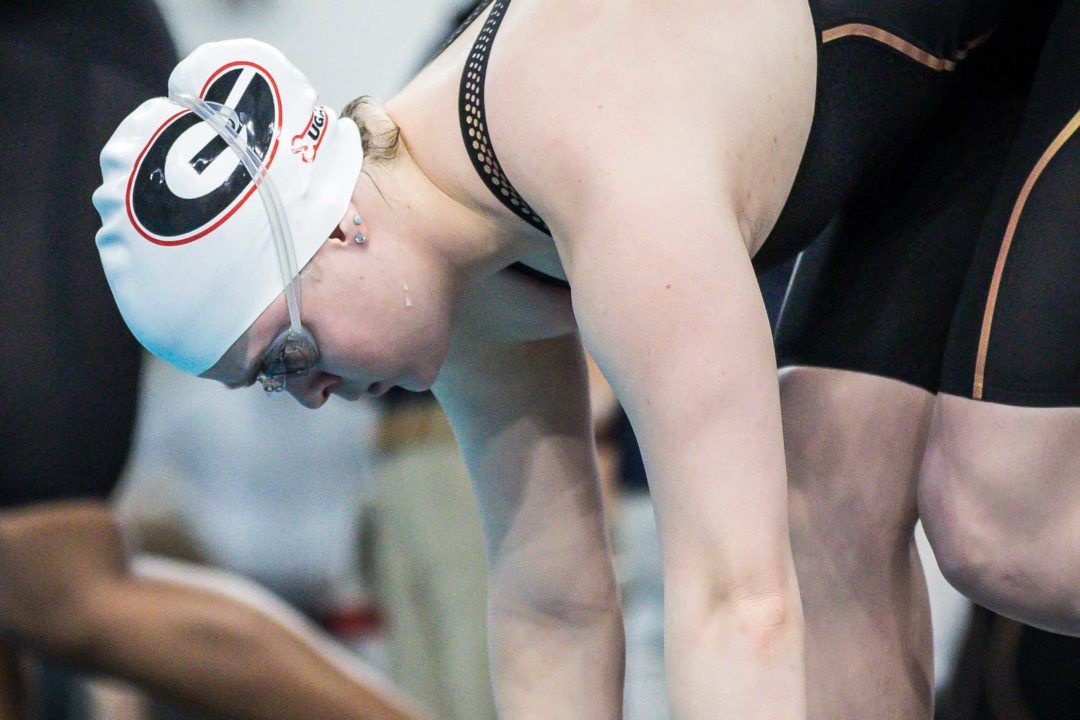 While bringing in 16 newcomers, the Georgia women will have to rely on a small group of key upperclassmen to take over the majority of NCAA scoring. Stock photo via Jack Spitser/Spitser Photography

The Georgia Bulldog women saw a turn-around after their shock 18th-place finish at the 2019 NCAA championships, boosting up to placing 8th at the most recent NCAA championships. Stepping up for the Bulldogs to earn three A-final swims, including a national runner-up finish in the 200 IM, was sophomore Zoie Hartman. At the 2021 SEC Championships, Hartman was also a three-time champion in the 200 IM and both breaststroke events.

Giving her last hurrah for Georgia with two NCAA A-final appearances and the SEC 500 free title was senior Courtney Harnish. Along with Harnish, two more seniors, Gabi Fa’Amausili and Danielle Della Torre, were instrumental to the majority of Georgia’s NCAA relays, which all scored. Della Torre was also a B-finalist in the 200 breast. A fourth senior, Olivia Anderson, had also picked up some solid individual points in the 1650 free. While Harnish and Anderson graduated, both Fa’Amausili and Della Torre will be returning to the roster for a fifth year, keeping a few crucial relay spots intact.

Standing out for the freshmen was Maxine Parker, picking up a pair of 12th-place finishes in the sprint free events as well as contributing to a number of relays. Junior Dakota Luther was the sixth Bulldog to score at NCAAs, finishing a valiant third in the 200 fly.

Georgia is set to welcome a big incoming class of 16 newcomers, but will certainly need the guidance of these strong upperclassmen.

Maxine Parker, now a sophomore, headlines the Georgia women’s sprint crew with a sub-22 50 free and sub-48 100 free. At SECs, Parker was a 47.75 in the 100 free, which could have placed in the A-final if she had replicated that time. Nonetheless, Parker looks to be in a great position to improve upon her NCAA swims now that her debut season is in the books.

Fifth-year Gabi Fa’Amausili returns with a strong 22.09 in the 50 at SECs last season, but couldn’t repeat that at NCAAs. She also was 49-low at SECs, but did not swim that event at NCAAs. Fa’Amausili is more known for her relay contributions, however, has a rare opportunity to better her own performances with this fifth-year decision.

The strongest gains from the newcomers’ side include 22.6-capable Eboni McCarty and 22.7-capable Elsa Fretz, who can also put together 49.4 in the 100 free. In due time, one or both of these freshmen could see improvements that near Parker’s standards.

As for the 200 free, transferring from Arkansas is Peyton Palsha, who is a 1:45.2-capable swimmer on top of her distance free talent (more on that shortly). Freshman Dune Coetzee of South Africa has been 2:00 in the LCM pool, translating to roughly 1:45.8, another sub-1:46 addition for the 200 free squad. Both women’s times would have placed in the top 16 at NCAAs. Lily Gardner (1:46.2) and Fretz (1:46.6) are more incoming options for SEC scoring and/or potential NCAA scoring along with returner Sloane Reinstein (1:46.26 at SECs).

Returners Maddie Homovich and Jillian Barczyk were SEC point contributors in the distance free events as well, both going 4:44/4:45 in the 500, but did not deliver at the same level at NCAAs.

On a different note, No. 10 class recruit Rachel Stege has been as fast as 4:40 in the 500 free, which is the fastest of all incoming NCAA freshmen this season, as well as 16:21 in the mile. Pending if Stege can either better her times or at least replicate her bests at the NCAA Championships, Georgia could see an influx of distance free points.

At the same time, fellow newcomer Abby McCulloh has been sub-16:10 in the 1650 free before and 4:41.5 in the 500 free. Both swimmers have the potential to find themselves in NCAA scoring position in these events. Joining the duo in the distance crew will be South Africa’s Dune Coetzee, whose best SCM 400 time of 4:07.9 translates to 4:43.3 in the SCY 500 free, another scoring potential.

Fifth-year Gabi Fa’Amausili went sub-53 at SECs to place sixth, but would not have even made the B-final at NCAAs if she had swum the event at the championships.

Similarly, Maddie Homovich won the SEC 200 back B-final with a 1:54.28, yet would not have made the B-final if she had repeated her time at NCAAs. Along with Homovich, Portia Brown and Sammie Burchill were way off their 200 back SEC times.

On a different note, freshman Eboni McCarty should be a great training addition for this group as she comes in with a 53.5-strong 100 back best.

South African newcomer Dune Coetzee owns a 2:10.89 LCM best in the 200 fly, converting down to 1:55.39, which is right on the bubble of NCAA scoring potential. Coetzee’s incoming 200 fly time will help push the paces of upperclassmen Tatum Smith and Callie Dickinson, who scored at SECs but underperformed at NCAAs.

The 2021 national runner-up in the 200 IM was Zoie Hartman, clocking in a statement 1:53.34 swim. She also went 1:53-mid at SECs, giving her another conference title. Placing fourth at SECs was Danielle Della Torre at 1:55.74, which could have placed in the A-final at NCAAs if she had repeated that time.

Doubling up the distance, Arkansas transfer Peyton Palsha was fifth in the 400 IM (4:08.42) at 2021 SECs, but did not swim it at NCAAs. Palsha’s addition to the long IM squad is still beneficial, though, since Callie Dickinson has also been at that 4:10-range and could find her own benefit training with Palsha.

Newcomer Mia Abruzzo is a solid 4:10 in the 400 IM as well, which is just outside of NCAA top-16 scoring. She has also been sub-2:00 in the 200 IM, which can be improved upon training with this experienced IM group. Mary Martin is another 200 IM addition, bringing in a quiet 2:02.96 best that could eventually go sub-2:00 with quality Bulldog training.

The quintet of Bulldog divers saw three qualify for the 2021 Zones rounds, but none advanced to NCAAs. There are four seniors in this group, but again, none have qualified for NCAAs. With this weak diving group, the Bulldogs will need to place more emphasis everywhere else to make up for these lost diving points.

The Bulldogs saw all five of their relays score at 2021 NCAAs, with their 800 free relay finishing fifth and 400 free relay placing seventh for All-American status. Gabi Fa’Amausili and Danielle Della Torre were on the majority of those relays and both will be making her fifth-year return to the Bulldogs’ benefit. Meanwhile, their 200 free relay finished 11th with only one sub-22 split, thanks to Fa’Aumausili.

Maxine Parker and Zoie Hartman were key members on those higher-placing freestyle relays, with Hartman blasting a 1:42.89 anchor on the 800 free relay as Parker remains the point-freestyler. Sub-1:46 team additions Peyton Palsha and Dune Coetzee will be great power-ups for Georgia’s 800 free relay, but there’s other relays that could use all the help they can get.

Their 400 medley relay took 11th as well, but will be looking to fill graduated senior Courtney Harnish‘s 52-mid butterfly leg. Fa’Amausili will be able to return her 53.0 backstroke lead-off leg on the 400 medley relay, as will 58-mid breaststroker Zoie Hartman and sub-48 freestyler Parker.

The Bulldogs’ weakest relay is their 200 medley relay, which placed 14th overall. Fa’Amusili (24.34) and Della Torre (26.86) will return their back/breast legs, yet the Bulldogs will still have to search for a replacement for Harnish’s 24-low butterfly leg. Dakota Luther has been 52-flat in the 100 before, making her the best candidate by far to take over the sprint fly legs.

Georgia has a great opportunity to stay within top-10 contention at NCAAs with the likes of some power swimmers who can score massive points placing in the event championship final. The squad will be able to retain the majority of their NCAA relays with two fifth-years returning, yet will need to work their large incoming class to get their times up with some of their experienced upperclassmen counter-parts.

Freshman Lily Gardner is on my radar.

Just perform a little coaching poka-yoke on those stroke and conditioning mechanics, and Georgia will be back to National 1-2 form. Go Georgia..!!

They better be glad Peyton chose to leave the Arkansas shit show. She is a fierce competitor.

Feel like Georgia just hasn’t had some of those breakouts from strong recruit to big time ncaa scorer that would help put them in contention again. It’s also been a while since we’ve seen them have a lights out meet for the full team that we saw in early 10’s.

Since when is 2016 in the early 10’s? You know, the last time they won a national championship?

You are right but this will be the 6th year that they are not top 3 after a couple decades of always being top 2. And they have had a couple elite recruiting classes since 16 but haven’t coached them up like swimswamswum said. When is the last time any new Uga women have made the national team?

16 frosh and the headlines is team is led by upperclass?!?! Either the frosh aren’t great or they will be a top 3 team?