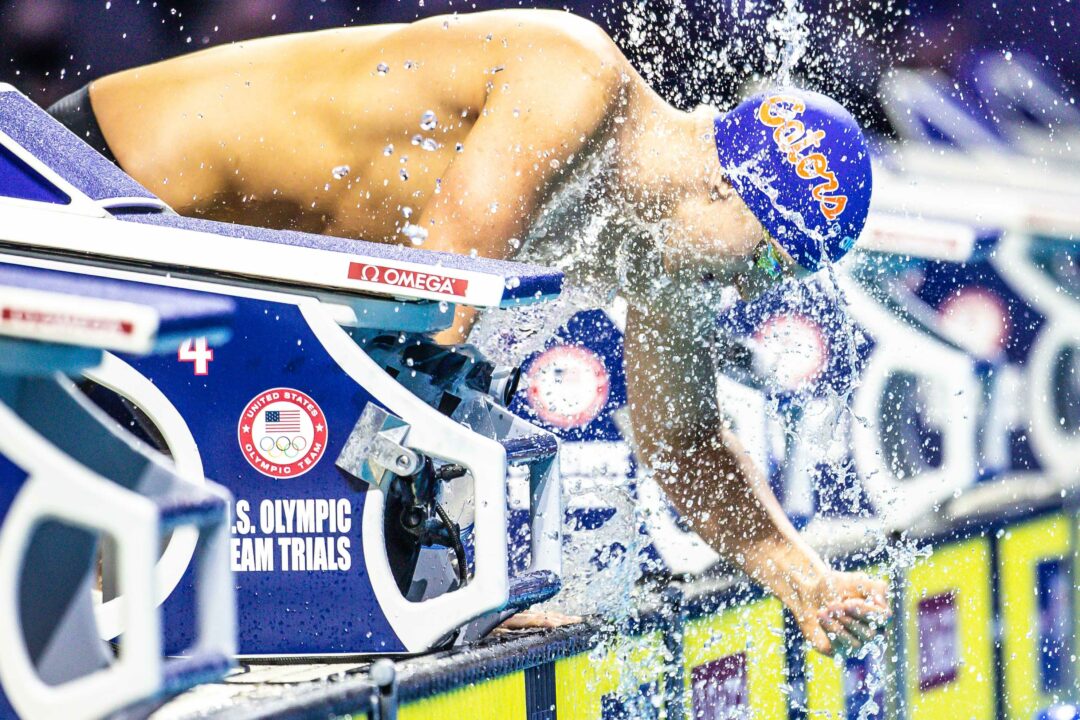 The University of Florida men remain one of the strongest teams in the nation and returns all but one of its 2021 NCAA scorers. Archive photo via Jack Spitser/Spitser Photography

After a one-year hiatus due to the uncertainty surrounding the 2020-2021 season, our college previews back! We’ll be previewing the 2021-2022 seasons for the top 12 men’s and women’s programs from the 2021 NCAA Division I Championships – stay tuned to our College Swimming Previews channel to catch all 24.

Florida was dominant across all freestyle distances at the NCAA Championships, picking up a win from Kieran Smith in the 200 free and a second victory from Bobby Finke in the 1650. Finke also claimed the 400 IM.

Florida had a wildly successful summer at both the 2021 U.S. Olympic Trials and the Tokyo 2020 Olympic Games. At the Trials in Omaha, University of Florida men won all of the freestyle events. Granted, two of those victories came from alumnus Caeleb Dressel, who captured both Trials and Olympic titles in the 50 and 100 freestyle.

Florida has about the best situation possible for its sprint freestyle squad this season. First and foremost, Florida returns all of its 50, 100, and 200 freestyle 2021 NCAA invitees. Among the pure speedsters, sophomore Adam Chaney leads Florida’s sprint group. Chaney placed 3rd in the 50 free and 25th in the 100 free at NCAAs in 2021. While the 100 free might not sound terribly impressive, consider that he led off Florida’s 400 free relay in 41.74 at the end of the meet—a time that would’ve tied for fourth in the individual ‘A’ final.

Kieran Smith is another one of Florida’s greatest sprinters, though he is better known for his middle-distance success. Smith placed 6th in the 100 freestyle at NCAAs in 2021 and has been as fast as 41.79. Smith has also split 18.59 on the 200 freestyle relay. He is also, of course, the 2021 NCAA champ in the 200 freestyle and the only man to break 1:30 more than once. And we haven’t even covered the swimmers Florida placed in ‘B’ finals.

Eric Friese, Will Davis, and Trey Freeman create depth for Florida in sprint freestyle and round out the 200 and 400 free relays, while Freeman and Alfonso Mestre compliment Smith on the 800 freestyle relay. Stanford-transfer-turned-Florida-grad-student Alberto Mestre (older brother of Alfonso) adds to the Gators’ sprint onslaught, boasting lifetime bests in the 50 and 100 freestyles with substantial SEC scoring potential. Mestre’s 50 freestyle may also score at NCAAs, as well as bolster the Gators’ already lethal 200 freestyle relay.

Florida has both top-end talent and depth enough in distance freestyle to both win conference and national titles and pick up additional points in the ‘B’ finals.

Alfonso Mestre, Tyler Watson, and Brennan Gravley are also SEC scorers in the 1650 free. At the conference level, Florida is absolutely dominant in the 500. At the 2021 SEC Championships, Florida placed 1st (Smith), 3rd (Freeman), 4th (Mestre), 5th (Finke), 7th (Watson), and 15th (Gravely). Furthermore, then-freshmen Jace Crawford and Jack VanDeusen placed 20th and 21st, respectively, in the 500 free at the 2021 SEC Championships. Alabama transfer Nico Hernandez-Tome joins with potential to score in the 500 at both SECs and NCAAs. Hernandez-Tome announced his intention to transfer to UF in 2020 and sat out the 2020-2021 NCAA season. If he matches or improves upon his best times he could be a major contributor at SECs and possibly score at NCAAs.

Florida could have a rough go in the backstroke, though Adam Chaney does have a significant chance of placing in the top 8 at NCAAs in the 100 back. Chaney is also extremely proficient in the 50, providing a major boost to Florida’s 200 medley relay. Beyond Chaney, however, Florida is thin in backstroke.

Florida also brings in Mason Laur who has been 1:47 in the 200 backstroke, putting him on the bubble for scoring in that event at SECs. Regardless of whether he makes the ‘C’ or even the ‘B’ final at SECs, Florida needs to rebuild its depth in backstroke, or see enormous improvements from Laur.

Senior Dillon Hillis returns as Florida’s top breaststroker after a hugely successful junior season, winning the 2021 SEC title in the 100 breast and placing second at NCAAs. In his NCAA performance, Hillis posted a time of 50.96 in the 100 breast, the 2nd-fastest time in program history. Hillis also split 23.26 on Florida’s 200 medley relay at the SEC Championships and 50.27 on the 400 medley relay at the NCAA Championships, the fastest in the field.

Florida had no other men score in breaststroke at the 2021 NCAAs, though returning junior Kevin Vargas did receive an invite in the 200 breast, placing 26h in prelims. Amro Al-Wir, and Mateusz Dubas also all scored at the 2021 SEC Championships and return to Florida for the 2021-2022 season.

Incoming freshman Raphael Windmuller is a Brazilian swimmer who has long course best times that, when converted, put him on the bubble of scoring at the SEC Championships. Florida also brings in Peter Bretzmann, a North Carolina 3A high school state champion who boasts a lifetime best in the 200 breaststroke that also puts him on the verge of scoring at SECs.

Florida doesn’t boast the same butterfly supremacy it has in the past and lacks any significant scoring threats in the 200 fly at the national level. However, Eric Friese placed 7th in the 100 fly at the 2021 NCAA Championships. Isaac Davis also placed 9th in the 100 fly at the 2021 SEC Championships, though he’ll have to drop significant time to score at NCAAs. As far as 200 butterfly specialists go, Dillon Hillis, Jace Crawford, Miguel Cancel, and Tyler Watson all scored at the 2021 SEC Championships, and Crawford and Hillis could potentially get some points on the board at NCAAs if they are able to drop about one second apiece, based on what it took to make the ‘B’ final at the 2021 NCAA Championships. Additionally, freshman Mason Laur is on the bubble of scoring at SECs, based on 2021 times.

Florida’s only problem with the IMs is that their best swimmers in this discipline are also some of their best freestylers. Bobby Finke is the reigning NCAA champion in the 400 IM, and he took second to teammate Kieran Smith in the event at the SEC Championships. Kevin Vargas and Miguel Cancel also finished 4th and 7th, respectively, at SECs in 2021. Finke was Florida’s only scorer at the NCAA Championships in the 400 IM, though Vargas placed 20th and Tyler Watson placed 24th at NCAAs in the 400 IM.

Miguel Cancel and Argentine National Record holder Joaquin Gonzalez could also be scoring threats at SECs and potentially get NCAA invites with strong enough ‘B’ cuts in either the 200 or 400 IMs.

Leonardo ‘Leo’ Garcia returns as Florida’s only NCAA-scoring diver, though Anton Svirskyi also contributed to the Gators’ SEC campaign with a 12th-place finish on the 3-meter board and a 7th-place finish on platform. Florida also returns Nick Lydon and adds freshman Brandon Wegner. Garcia is a two-time All-American and Florida’s best chance for points on the boards at the national-level, a standard Garcia is capable of achieving. However, Florida’s other divers will need to rise in the ranks to give the Gators any significant points on the boards.

As for the 200 free relay, Cal only out-touched Florida by .08 in 2021 and now the Golden Bears will have to get by without Ryan Hoffer. Cal will also have to deal with a Hoffer-sized gap in their 400 freestyle relay and 400 medley relay, each of which beat Florida thanks to Hoffer. (Cal placed 2nd in the 400 medley relay to Texas, though Texas also loses backstroker Chris Staka, which is really more beneficial to Florida than Cal.)

Florida has a good shot at defending its SEC title and 3rd-place finish at NCAAs, though if they place a larger focus on NCAAs than SECs there’s a chance Georgia could upset them at the conference level. Florida is fortunate to lose very few swimmers, though their incoming freshman class, ranked 16th, largely buoy their freestyle and IM groups—areas where the Gators are already very strong. Overall, Florida remains one of the most elite teams in the nation with some of the biggest stars in the sport at the moment.

Y’all are forgetting to mention Alberto Mestre (21.9 LC 50 free) and Nico Hernandez-Tome (transfer from Alabama, NCAA distance qualifier) as key additions. Alberto is going to be massive for the relays, and Nico adds depth to the best distance crew in the country.

Leo Garcia (Diving) is going to surprise a lot of people this year.

Gators had a 500/1650 guy transfer from bama and sat out last year. He’s another guy who will score at SECs and potentially qualify for NCAAs.
I can see them putting Kieran in a bunch of different spots this year to make up for some thin events. I’m not sure the last time he swam a rested 200 back. Could be like Caeleb and swim completely different events from conference to NCAAs.

Kieran Smith 200 back is worth noting imo

If Gerry Quinn is actually back then I would think he slots in the 4 x 200. and an outside shot at a B final NCAA’s in the 200.

I believe that the Vols have the opportunity to outperform them..

Alberto Mestre transferring in will help with the sprint relays as well. They can probably take Smith off the 200 free relay to focus on winning the 500 and still be the favorites

Why didn’t they mention him in “key additions”?