Coleman’s Carpool: Gold Medal Mel answers “Who will be the next Rowdy” 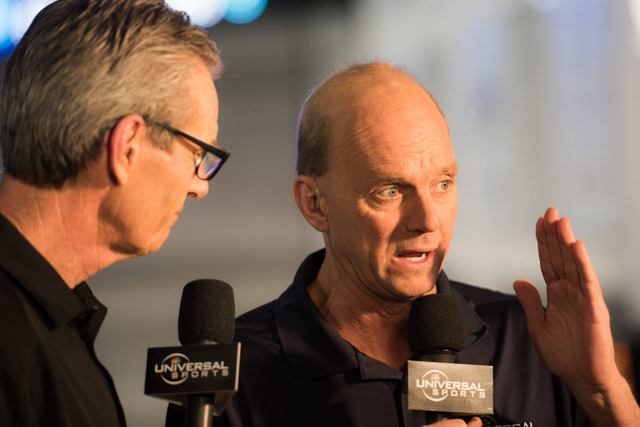 I asked Mel 1) why wasn't he announcing swimming? and 2) Who will be... the next Rowdy? Current photo via Mike Lewis/Ola Vista Photography

Everyone who’s a swim fan knows Rowdy Gaines. He has become the voice of swimming to this generation, sitting in the coveted NBC announcer chair at every major swim meet, national or international, for the last 15+ years. I asked Mel 1) why wasn’t he announcing swimming? and 2) Who will be… the next Rowdy?

….haven’t even watched this vid yet… Hang on. I forget what I said bc I was just hanging out with Coleman in ATX…

Watched it…. I mentioned only a few guys, but the list is longer and includes a lot of exceptional women. You get better at it with time. Rowdy certainly did…….. I’d add that the BBC coverage, the way they did it, is ideal. I really liked the BBC’s coverage of the 2012 Games. There was a host and a color person, but in between events they threw the camera to Ian Thorpe in a studio sitting on a couch. Thorpe’s commentary made me feel like I was watching the Olympics with him on the couch. Just chill, very authentic. That’s the Olympic experience, and that’s what I’d like to see in 2020.

I think it’s telling that a lot of hard-core swim people would rather watch the BBC feed or the international swimming feed, and people who aren’t into swimming watch, know, and appreciate Rowdy. I think having both options available remains a good thing, and am curious if there is a way to bridge the gap between the two.

Oh snap…… Phelps? If Michael wants to call color, Michael will call color. However, I do think the way the BBC did their coverage would work great with Phelps. It’s all FaceTime / direct connection with the audience, a starring role. (I’m a big fan of what Phelps is doing on Facebook.)

Just wrote a long comment about Phelps and didn’t post… So, Phelps. Can’t believe I didn’t mention Phelps. If Phelps wants the chair, Phelps gets the chair. I actually think Phelps would be fantastic. He’s got an eye for details– and he’s comfortable on camera.

Thanks for adding there are some exceptional women who could be on that list!

Donna DeVarona was ABC’s female swimming announcer for years and years — I may be wrong but I think she shared duties with Murray Rose before she was paired with Mark Spitz and then John Naber. Why things went to just one male, namely Rowdy, after Donna is puzzling.

He asks, “Who is going to be the next Rowdy Gaines?” but there’s no sign that Rowdy’s leaving. Is NBC replacing Rowdy?

Rowdy Gaines does not have command of the English language. That, combined with his erratic ADHD mind, makes for some bad announcing. A recently retired sports media critic said that Rowdy was the most annoying announcer he had to cover.

Mel alludes to the “politics” of swimming. Is it because it’s a small elite community that you have to be careful not to offend anyone and “play nice?”

I like the fact that he shows a lot of excitement when he works the meets. The problem is he doesn’t seem to have done his homework concerning the swimmers. There are only so many times he can say “breathing to his right” until you know he’s winging it. Also his over the top fawning over Michael Phelps is embarrassing

I’d love to hear a team of Stewart, Phelps and Coughlin (when she’s ready) .

(A minute into the video) COLEMAN COULD SEE THAT RED CR-V COMING UP ON HIM B/C HE WAS BREATHING TO HIS RIGHT!

Lol. Wish I had a dollar for every time I heard Rowdy say that.

I want him to purposefully say it in a non-free stroke so badly. It would make like 0.01% of the audience’s head explode (SwimSwam commenters) and I would die.

I loved watching the swimming coverage on the NBC app for two reasons:
1) The two commentators were the woman and man duo from Australia and New Zealand (Rowdy Gaines wasn’t on it);
2) They talked about all of the swimmers, not just he Americans, and this was refreshing.

Fun fact: if you view the NBC archive videos of the Rio races, they don’t use the Dan Hicks/Rowdy Gaines version, but the above #1 version.

I could see Melvin doing the job. I heard him provide commentary for some events circa 2010 and he was knowledgeable and provided a pleasant easy-to-listen-to voice.

The commentators you are referring to are Nicole Livingstone and Bruce McAvaney. They are both Australian. You’re right they are so much better than Rowdy and Dan. They are more informative and more prepared.

I am not trying to be mean here, but although she is very knowledgeable, her delivery is SO monotoned and deadpanned, that she comes off as either deeply depressed or extremely bored. Absolutely NO animation in her voice. I found it very difficult to listen to. It made me really appreciate Rowdy.

NBC should hire Ariana Kukors! The commentary is in need of a fresh voice, a female voice, a younger swimmer with major experience and accomplishment to add a new dimension. She was very good this summer.

I could see Ari being the next Rowdy! I also think Anthony Ervin could be it too. He’s a great ambassador for the sport, and is the “rock star” of swimming

Ari indeed did very well & has the “broadcast-quality” voice. As for Tony, it depends on how long Rowdy keeps being the Energizer Bunny of swimming for men (of course, there is Dara for the ladies!)

I’m ready for Rowdy to be replaced.