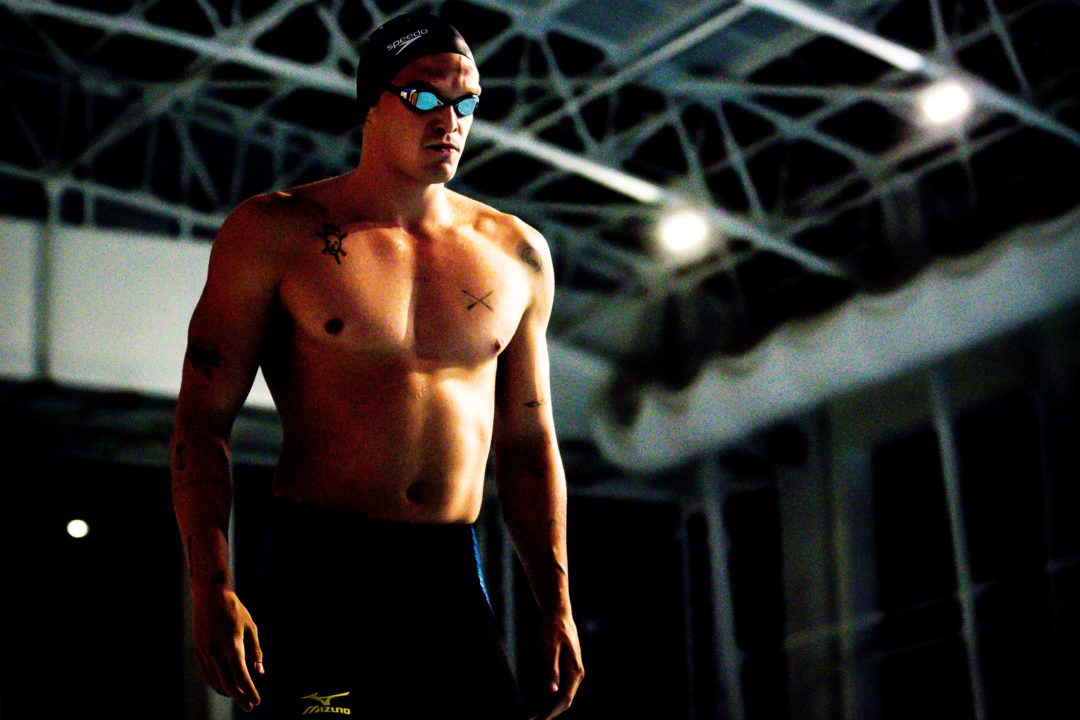 Despite his career as a pop star, Australian Olympic Trials qualifier Cody Simpson continued his return to the pool with a new best time in the 200 free. Current photo via Jack Spitser/Spitser Photography

After qualifying for the Australian Olympic Trials in the 100 fly last month,  Australian singer and swimmer Cody Simpson hit another lifetime best, this time in short course yards. According to an Instagram post from Simpson, he swam a new lifetime best time in the 200 free. While the video doesn’t include a time, it appears to be roughly 1:40.0 based on a hand timing of the video.

Despite not mentioning a final time for the swim, the video does feature his time after each of the first three 50’s. His first three splits were 22.4/47.3/1:12 according to the video. That would make the split on the final 50 around 28.0.

Our hand-timing of the split was more in the realm of:

Simpson only returned to the pool just over a year ago, racing at the Trojan Invite in October of 2019. At that meet he competed in just the 100 fly, finishing in 51.51. Since then, Simpson has begun training under former Auburn head coach and current USC volunteer assistant Brett Hawke.

Prior to his muscial stardom, Simpson was very successful in the pool. By 2012 he had won multiple gold medals at the Queensland Swimming Championships.

Despite his return to the pool, Simpson has still taken time to continue his career as a pop star. In December of 2020, he released two new singles, Higher Forever and Christmas Dreaming.

Desorbo brotherhood of fast clocks has a another member.

Comeback? From what exactly?

Getting dumped by Miley:/

he flew too close to the sun

How would he rank among masters swimmers? Might need to extend the age group into the the early 30s to get a good sample size.

I don’t know anything about his singing ect but he dances in his act? Might explain his leg and core strength.

I love this!!! Good luck Cody – this will show all those age group swimmers that anything is possible if you put your mind to it.

That time is good for a freshmen in Highschool

1:40 would be the fastest 2 free on the roster at many colleges across all divisions

How many division 1 programs don’t have someone under 1:40?

Last season, I believe there were 150 men’s D1 swim teams.

You must go to a very slow school then

I swim for one of the aforementioned 34 teams, and I am proud to be a part of said team.
My point is that it’s easy to lose perspective. When we read about highschoolers dropping 1:32s, it becomes hard to remember that a 1:40 is quite fast to a great many people, and is extremely respectable for anyone to hit during a race, much less a practice

I see your comments all the time and you just have the worst takes. Jesus man.

He hadn’t trained for what? A decade maybe? He was a kid when he quit!
And now, after only a year, this is impressive, particularly because this isn’t 50 free. Yes sure, it is slow(ish) in comparison to other swimmers his age. But what does that really matter? It’s not like he tweeted “On my way to be in the Olympic final!”
He’s just proud to have a new PB. Good for him!

Say what you will, but a 54- 100 LCM Fly is pretty legit for a guy who wasn’t swimming full-time until recently.

Quite a drop off

He did the Chad Le Clos race strategy

Dude next to him made up some ground on that last 50, but nevermind he had quiet a head start as well 🙂