Dawn Dill talks about coaching in Division III, MIT, and the upcoming swim season for the Engineers. photo via Tim Binning/TheSwimPictures.com

I enjoyed the opportunity to connect with the coaches of the top three teams from NCAAs last year for both the men and women. We spoke a bit about their interest in coaching Division III, their respective colleges, and then turned to discuss the upcoming season. Here’s what they had to say. 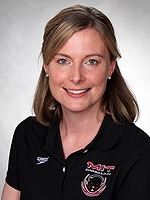 Dawn Dill, Head Coach MIT (2013 Men’s Third Place). Coach Dill enters her 10th season as Head Coach for the Engineers after being away on maternity leave last season. In 2012, she guided the Engineers to a fourth place finish at the NCAA championship. Dill is a 1996 graduate of Smith where she swam breaststroke and was named the New England Swimmer of the Year.

I was a Division III swimmer and many of the life lessons and qualities that I gained swimming at Smith carried over to my coaching philosophy. In Division III, you can take the approach of coaching the whole person, not just athletically, but helping them develop and create leadership skills. As coaches we have enough time to really put our efforts into getting them to be fast in the pool, but the goal is to have folks graduate and be really proud of themselves as people.

Some of these kids are really changing the world. We had a swimmer this past summer work on developing a medication that’s going to target breast cancer. She was one of the first researchers, being a huge part of the medication development. It’s incredible. The education here is focused on engineering, science and math. The qualities they come in with are a love of learning and intense curiosity in how things work. The collaborative style applies to the real world. They are encouraged to not think that anything has a limitation; that “anything is possible.” It’s ingrained in them at MIT that they can do anything. If a class or a club isn’t there, let’s go ahead and make it happen. That carries over to training. Our swimming is modeled after the MIT way – it’s about opportunities and pushing to extremes and benefiting the whole person for the greater good.

What are you excited for this year?

We have the way our calendar works shuffled around this year. In January we have our Williams and Amherst meets back to back. That’ll mimic what it’s like at NCAAs when it all happens in the morning. It’s about learning how to get up and swim fast again. I think it’s one of those weekends when a lot of the toughness of the team will shine through, coming out of double days. Hardcore work ethic going into the weekend, and then grinding it out.

We have a really nice, smaller group of freshmen – eight men and eight women. A little on the smaller side of us. They are complimenting my returners. Any holes we had last year, the freshman class is going to be able to fill out. We have this crazy breaststroke lineup, and a couple freshmen adding in to the men’s side. Women’s side – events we were weak in we’re adding in. Sprint relays are going to be very strong.

I’m a big believer in beg-borrow-steal. One of the things that’s exciting for the program is adding another full-time position – associate head coach. That’s new for us. We’ve only had one full time coach and part time volunteer. Two full time folks on deck will be great. It’ll allow us to do more underwater film analysis, talk more about race strategy. With a year off last year, I had more time to think about dryland, and apply what we’re doing in dryland to the water to make it a little more seamless. Adding that full time position will mean more mentoring, meeting one-on-one to talk about goals. I think that’s so important. It’s hard, with so many people vying for attention.

this is for sure a program to watch. Wyatt Ubellacker made the A final in the 50 fly and the B final in the 50 free at nationals WC Trials this year! He has now graduated but they will be looking for the next person to make their mark on a national level.

Before you start patting these D3 coaches on the back and listening to their so-called approaches to success, you should realize that it’s becoming less and less of a secret that many of the top ten D3 teams have very generous arrangements through their respective financial aid offices. Do you think that the influx of very talented swimmers over the past decade is the result of a telephone call and a campus visit?
I would hazard a guess that anyone with a little accounting background would have a field day checking the books with the amount of money and “financial aid based on need and academic merit” are administered at some of these schools.

While I think you bring up a valid point that there may be some money coming forward to the swimmers in less traditional ways than athletic scholarships, D3 is still a different animal than D1 swimming. The coaches have to make these athletes successful in and out of the pool and at the end of the day they have different financial, academic, and time constraints than many D1 teams do. I don’t believe any of this takes away from their approaches to success. Recruiting specific athletes to your school is only the first piece in having a successful team

This comment is absolutely absurd. All I can say is that as a member of this swim team I definitely receive no special financial aid. MIT’s financial aid system is COMPLETELY need based, and isn’t very good at that. When I received my financial aid statement before committing to come here I had to have a serious talk about the benefits of an MIT education. I could’ve saved a lot of money by going to a state school, but I chose to come here because I love it here. It’s shameful to say that we’re lured here by money; we’re lured here by the chance to be the best in whatever we want to do. Swimming was not a decision… Read more »

The point is: it’s not the innocent, level playing field that it is supposed to be. Recruiting and attracting better athletes are still the easiest ways to make a coach look better. The true D3 no longer exists and that’s an injustice to the swimmers and coaches who compete at the institutions who abide strictly by the D3 financial and admissions policies.
It makes me a little ill to hear some of these coaches talk about building talent and academics, when so many of us know what really goes on behind the curtain.