Cleveland State Women Back In Win Column With Victory Over Youngstown 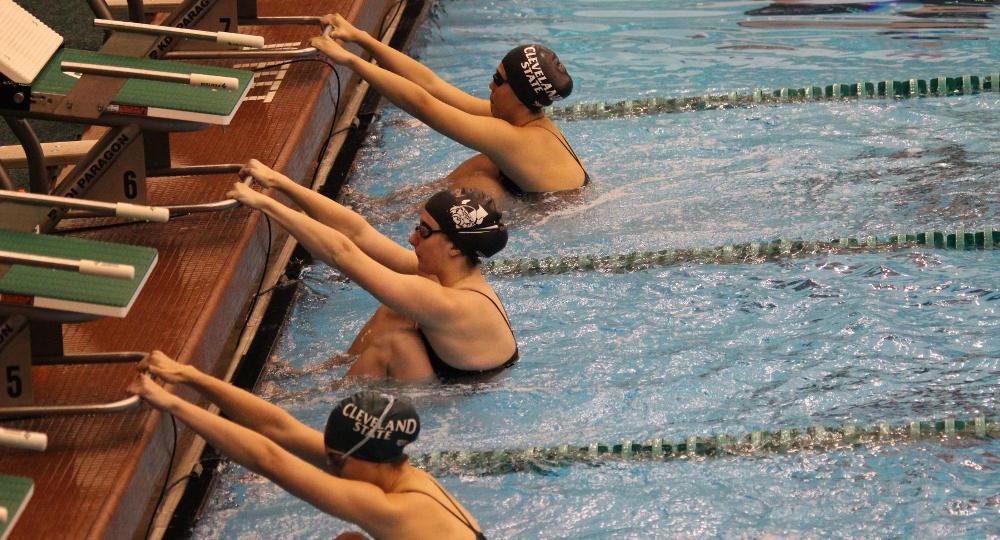 The Cleveland Viking women returned to the win column for the first time since October Monday against Youngstown State, winning the dual by a score of 172.5-127.5. Prior to this meet, they had lost three consecutive duals, with their last win coming October 29th against Xavier.

Sophomore Cassie Oltman also had a strong showing, winning the 100 back, taking 2nd in the 100 fly and leading off the 200 medley relay.

The Youngstown State Penguins picked up four wins on the day. Junior Madison Aranda won the first individual event of the meet in the 1000 free, clocking a time of 10:43.03. Viktoria Orosz, also a junior, had their other two pool victories, leading a 1-2-3 finish in the 500 free and also winning the 200 IM. Diver Bethany Glick was their other winner in the 1-meter diving event.

CLEVELAND, Ohio – The Cleveland State University women’s swimming and diving team returned home and got back on the winning track with a 172.5-127.5 victory over Youngstown State Monday evening at The Robert F. Busbey Natatorium.

A trio of Vikings each won two individual events Monday.

Freshman Meghan Bobick won a pair of freestyle events. She started her day by claiming the 200 in 1:54.70, winning the event by over two seconds. Bobick also won the 100 free by exactly two seconds, stopping the clock in 52.72 seconds. Senior Anna Evans took second for CSU in the 100 free.

Oltman and sophomore Michaela Bargardi combined to sweep the backstroke events, as the former took the 100 in 57.99 seconds and the latter won the 200 in 2:08.08. Oltman’s showing in the 100 was part of strong effort by the Vikings as CSU claimed the top four places in the event.

Junior Jamie VanDewerker won the 50 freestyle in 24.85 seconds while Jaszcz was the runner-up in 25.34 seconds. VanDewerker also took second in the 100 backstroke in 59.74 seconds.

Oltman, Zeller, McNamara and VanDewerker won the 200 medley relay in 1:46.69 as CSU took the top two places in that event. VanDewerker also was in on CSU’s winning 200 free relay as she led off and was followed by Evans, Bobick and sophomore Ashleigh Bennett, as the quartet finished first in 1:38.06.

Cleveland State will continue facing Horizon League foes in dual action this weekend as both the men’s and women’s programs travel to Wright State Saturday, Jan. 21.

Cleveland, Ohio – Madison Aranda, Vikotria Orosz and Bethany Glick each won events as the Youngstown State swimming and diving team was in action for the third time in three days this time competing against Cleveland State at the Buseby Natatorium on Monday.

Glick won the 1-meter dive with an impressive score of 293.40. She won the event by almost 40 points of YSU’s Lydia Scheringer who placed second with a 253.65.

Megan Siford narrowly missed taking first in the 3-meter dive. Siford posted a score of 246.45 placing just behind CSU’s Tori Taffner who scored a 246.68. Scheringer was third with a 240.45.

YSU returns to the pool on Jan. 27 when it visits Akron.