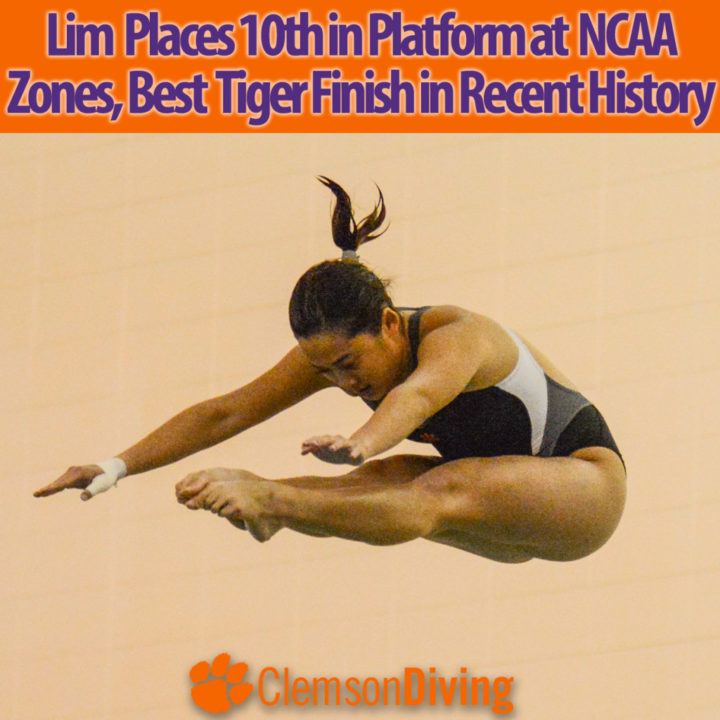 Clemson University has dropped the final ax upon its aquatics program by cutting it’s women’s diving program. That team was... Archive photo via Clemson Athletics

A blanket release was sent out on Tuesday to coaches around the country notifying them of the move and subsequent open season on transfers from Clemson.

The Tigers had 3 signees, who will have their National Letters of Intent declared null-void. In addition, 12 of the team’s 14 divers from this season have NCAA eligibility remaining.

The program struggled to compete in the ACC as one of two diving-only programs in the conference (along with the Miami men), but had positive momentum in 2017. For the first time since dropping swimming that head coach Leslie Hasselbach Adams’ team has had an NCAA zone qualifier in all three events (1m, 3m, platform).

Danielle Reitsma finished her eligibility this season and placed 5th on the 1-meter at the ACC Championships. The team placed 13th at ACCs with 144 points – only 8 points behind Boston College, who has swimmers but lost their coach mid-season.

With the cut, Clemson, who won last year’s NCAA FBS National Championship in football, is down to 8 men’s and 8 women’s programs. Clemson is adding women’s softball to bring the women’s total back up to 9.

They had FOURTEEN divers? wow. Even for a dive-only program, that seems extraordinarily high.

With the loss of Diving now they’ll bastardize another women’s program as they have already done with a Rowing squad made up of 55 team members. Sadly they can spend millions on Football and their resort like training facility while getting away with spending a pittance on the Women’s and Olympic Sports left at the institution. It’s all about participation numbers matching student enrollment.This decision only validates what a mockery of Gender-Equity and Title IX already in place at CU. Shame on you Clemson leadership and the state of South Carolina for enabling this sad situation.

You know you could always pony up and give them a nice donation to help them out with those women’s sports. It all about the money. Fans pour money into football because it’s what they like to watch, how many big donors do you think care about swimming, track or women’s tennis. If they earmark it for football nothing anyone can do to use it for another program. Do you expect them to say thanks but no thanks the swim team needs a new pool? A vast majority of improvements to athletic facilities are done through fundraising from boosters not from state funds.

As an aside, it’s sad that Clemson cannot spend some of it’s recent football-success money on *bringing back* full swim/dive instead of cutting the last remnant.

Clemson overall has a sorry athletics program – they have had recent success in football, but their other sports always lag near the bottom of the ACC, and in state, they suffer because U of South Carolina is viewed as the far superior school in academics and student life. Outside of football, even Coastal Carolina, College of Charleston, are viewed as a better choice for athletes in other sports.