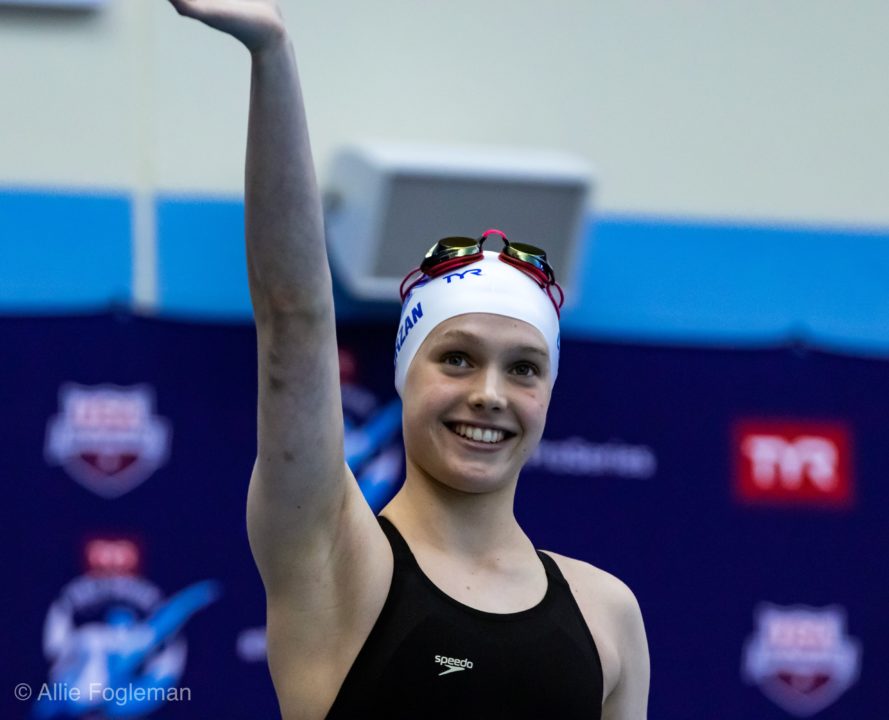 16-year old Claire Curzan has swum a time faster than her own National Age Group Record in the 50 yard free, but it's not clear if the swim will count. Archive photo via Allison Fogleman

The top finisher in the women’s 50 free was 16-year old Junior National Teamer Claire Curzan in 21.51. That’s a new lifetime best for her, and clears her own National Age Group Record of 21.77 set last year.

That time ranks her as the 4th-fastest junior (18 and under) in US history:

USA Swimming return-to-competition rules aren’t allowing times swum in the month of July to count for anything beyond LSC-level meet qualifying marks. We’ve reached out to USA Swimming to ask if records swum during July will count.

There is another confounding factor in play: she raced against male swimmers in her heat. While USA Swimming rules do say that “lead-off legs/initial distances of mixed gender relays shall not count for American or U.S. Open records,” the rules don’t address what happens in mixed gender heats of individual events. The rules specific to National Age Group Records also don’t mention any restrictions on records set in mixed gender events, individual or relay.

Curzan swam her race from lane 1 in a heat with 7 male swimmers. The swimmer next to her swam 22.00.

Curzan was the 4th-best finisher overall in the race, behind the top male finisher, 19-year old Michael Ivy, in 20.79.

Curzan trained in a backyard pool, on a tether, in a wetsuit, until her team was able to return to the water.

Twichell, who has already qualified for the Tokyo Olympics in the open water 10km event, kicked her weekend off with a 4:44.49 in the 500 free.

At her last meet before the quarantine shutdown, the 2020 Cary Sectional Championships in this same pool in early March, she swam 4:43.09.

Other Top Finishers from Friday:

Congratulations to her, and all the swimmers who went best times! She just keeps getting better, and I can’t wait to see what she can throw down in the remaining events. Hope she gets an official go at the record soon!

Fantastic time from a fantastic swimmer. Does anyone know what the times of the boys in the lanes next to her were? (I’m guessing the record won’t be ratified, given everything, but if the swimmers next to her weren’t significantly faster, we fans will know her time was legit.)

Thank you for that. That’s awesome, means her 21.51 was completely legit, even if it doesn’t get ratified.

is there anything in the USAS rule books that may reflect that?