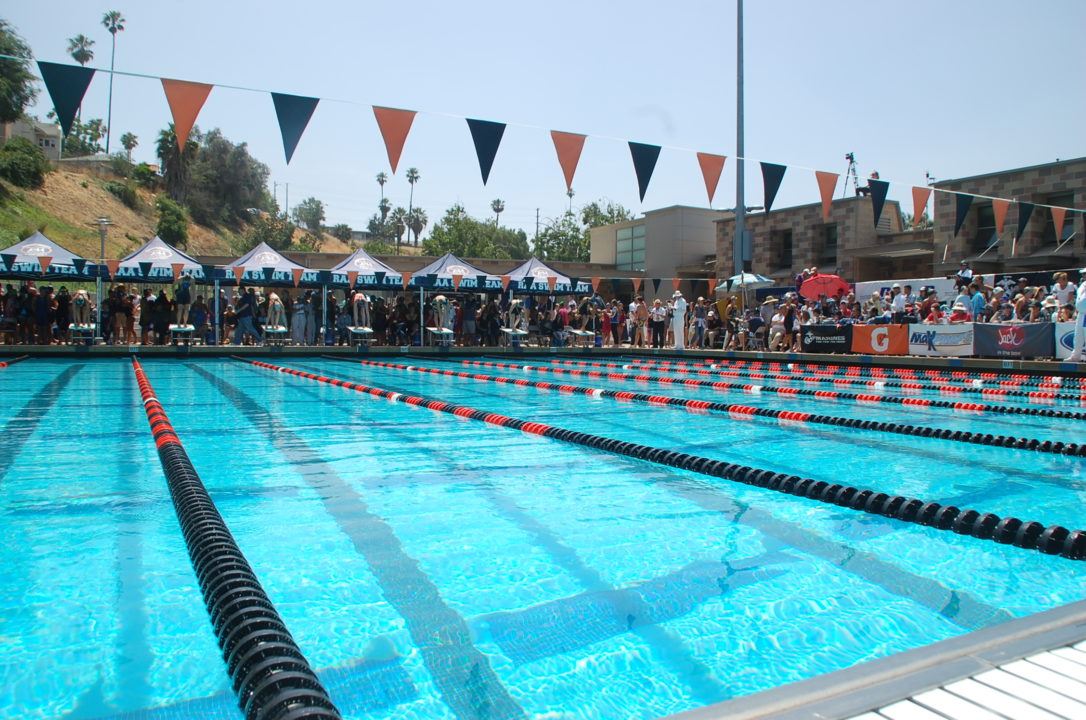 The CIF Southern Section Championship will move forward amongst cancellations, including the recent cancellation of the CIF State Swim and Dive meet. Stock photo via Anne Lepesant

While a few of the other California Interscholastic Federation (CIF) sections have opted to cancel their section’s championship meets, the Southern Section will continue on in preparation for their meets.

The section recently released the meet information to coaches and teams, covering meet formatting, entry procedures, qualification standards, and other information. Like many other meets around the country, spectators will not be permitted. Only one coach per team will be allowed on deck.

Each swim meet will be formatted as a timed finals event, with only the top-16 swimmers in each division competing at competition. Although each event will take place in two heats, swimmers from either heat will have the opportunity to place in the top-eight.

The diving section of the event will also take place according to the four divisions, with five diving championships being held over the course of two days. CIF Southern Section Division 3 will be separated into both a boys and a girls meet. All of the rounds of diving will be completed in one session.

Given that the CIF State Championships were cancelled in late April, the meet will serve as the final competition of the season for swimmers in the CIF Southern Section.

An interesting development recently came from the CIF-San Diego Section, which originally called for the cancellation of their section championships, but announced on April 16 that the championships were back on. They were held over the weekend of April 23-24.

The cancellation and later reinstatement of the CIF-San Diego Section championships demonstrates the dynamic nature of California’s public health guidelines, which heavily influenced youth sports in California. The state of California currently maintains their ban on out-of-state youth sport competitions.

With the statewide roll-out of vaccinations, most counties are beginning to loosen COVID-related restrictions, but the situation remains variable. Abrupt changes in COVID cases and hospitalizations within the borders of the CIF-Southern Section’s coverage could possibly impact the competition.

Meet entries for the competition are not due until the morning of May 22, so whether or not athletes preparing for the Olympic Trials will compete in the CIF Southern Section Championships is unclear at this time.  With the first wave of Trials beginning on June 4, that leaves less than a two week turnaround for athletes also scheduled to compete in the CIF Southern Championships.

In 2016, many athletes who had already qualified for the 2016 Olympic Trials decided to turn their focus to that meet instead of competing at the CIF Southern Section Championships. Among swimmers who opted out were Grant Shoults, Maxime Rooney, Sam Shelton, Katie Glavinovich, Nora Deleske, and Kate Krolikowski.

If kids skipped the CIF, its mainly kids from Loyola or Santa Margarita. The article on the dual meet explains that.

These section championships and the state meet could be held in a Covid safe manner. Lazy people would rather cancel. The kids deserve better. Swimming takes place outside where risk of transmission is very very low.

But…..but….. yes. San Diego managed a prelim final meet after back tracking from cancellation. It’s just not that hard. Two years now for swim and all spring sports.