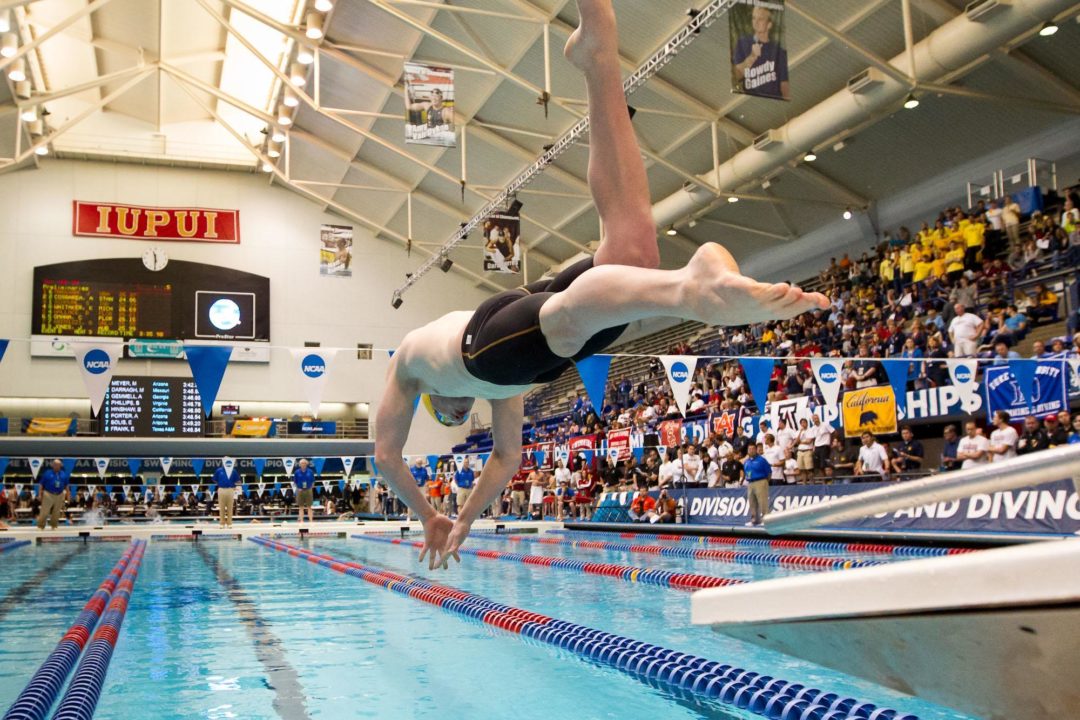 Several state records and the National Public High School record in the 400 freestyle relay were broken during the prelims of the Indiana High School State Championships at IUPUI. Archive photo via Tim Binning/TheSwimPictures.com

Three swimmers dipped under the 1:40 mark in the 200 freestyle. Avon High School’s Park Jones earned the top seed with a 1:37.29. Chesterton’s Ethan Whitaker earned the second seed with a 1:38.23 and Adam Destrampe from Franklin Community High School was third at 1:39.77.

Chesterton stand-out and Jr. National Team member, Blake Pieroni easily earned the top spot in finals of the 200 IM with a 1:46.78. Jon Stoller from Northridge High School was second with a 1:49.42, and Cody Taylor from Colombus North High School was third, also breaking 1:50 at 1:49.77.

Zionsville High School’s Kyle DeCoursey posted the fastest time of the session in the 50 freestyle, earning the top seed with a time of 20.65. Penn High School’s Mate Kovacs qualified second at 20.71 and T Martin from Jeffersonville High School earns the third spot at 20.89.

Diving prelims take place in the morning, and the top 8 will advance to the finals tomorrow with the rest of the swimmers.

After a short break, Chesterton’s Aaron Whitaker broke the state record he set last year in the 100 butterfly, posting a time of 46.61. Ian Finnerty from Bloomington South HS qualified second with a 48.18 and Penn HS’s Bowen Anderson qualified third at 48.79.

Whitaker’s teammate, Blake Pieroni, also broke his record in the 100 free from last year, touching the wall at 43.52. Kyle DuCoursey from Zionsville qualified second with a 44.69, and T Martin from Jeffersonville was third at 45.25.

Aaron Whitaker was chasing the state record in the 100 backstroke, but missed it by .02, touching at 47.31 for the top seed tomorrow. Wilson Beckman from Munster HS qualified second at 49.20 and Joseph Young earned the third seed with a 50.10 from Hamilton Southeastern HS.

Cody Taylor broke the state record in the 100 breaststroke that has stood since 2007 with a time of 54.56. Following Taylor tomorrow will be Ian Finnerty from Bloomington South HS at 54.91 and Christian Lorenz from Avon HS with a 55.35.

Finals will start at 1:00 pm eastern time at the IUPUI Natatorium.

Indiana high school swimming still very strong nationally. Never to be underestimated. They are right up there with the much larger states of CA, TX, PA, and FL.

Is aaron whitaker related to Kyle at Michigan?

and he’ll be a freshman at Michigan in the Fall