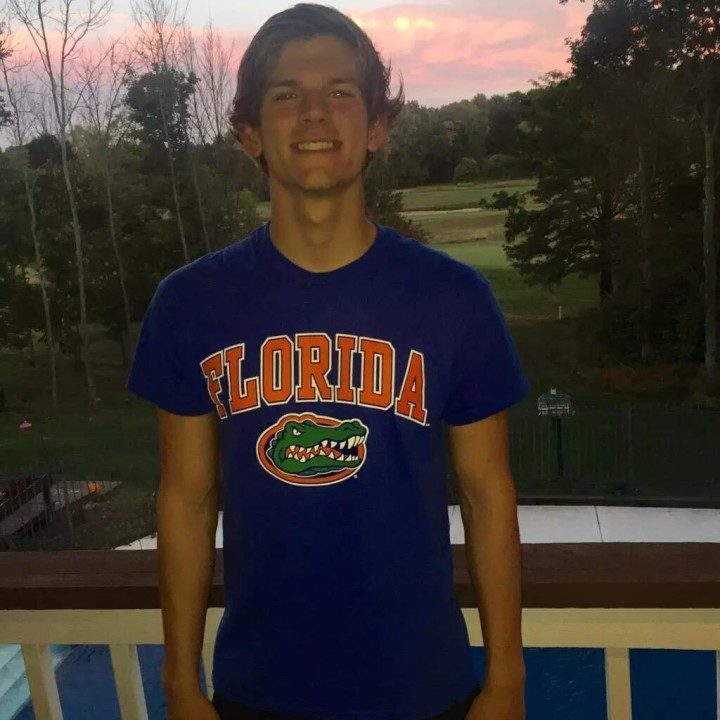 Chandler Bray of Avon High School blasts a new National High School Record in the 100 breaststroke, with finals yet to come tomorrow. Archive photo via courtesy of Chandler Bray

Heading into the meet, Bray’s quickest personal best was the 54.12 he registered at last year’s Winter Junior Championships, but he demolished that mark, replacing it with an incredible 52.65 to race to the top seed at IUPUI Natatorium today.

With Creighton Prep being a private school and Avon a public, Molacek’s record should remain as the independent school record. Bray’s time then actually takes over the previous public high school record of 53.06 held by Connor Hoppe from Golden Valley High (California), also from 2014.

Bray was runner-up in the 100 breaststroke at the IHSAA Championship meet in 2015, clocking a 54.80 after 54.45 in prelims. As such, his time tonight was a huge drop for the senior, as the future Florida Gator’s mark of 52.65 would have placed 5th at last year’s SEC Championships and 15th at last year’s NCAAs. And, he still has finals tomorrow night.

To what does Bray attribute his incredible national record-breaking outing? “Most of it has to be my astounding coach Jon Karr. He really is one of the best coaches in the nation and has really elevated our entire program in the last few years,” Bray tells SwimSwam.

Bray continues, “We’ve been working on my breaststroke pullouts a lot, they used to be my weakness so coming into this season we watched a lot of film and trained a lot on them.”

As to his next move, Bray tells SwimSwam, “I’m just looking forward to spending my last day of high school swimming tomorrow with my teammates, coach and family.” Bray also qualified first in the 200 IM at the meet, earning a time of 1:48.33.

Finals at the IHSAA meet take place at IUPUI Natatorium tomorrow at 1pm.

He is home schooled.