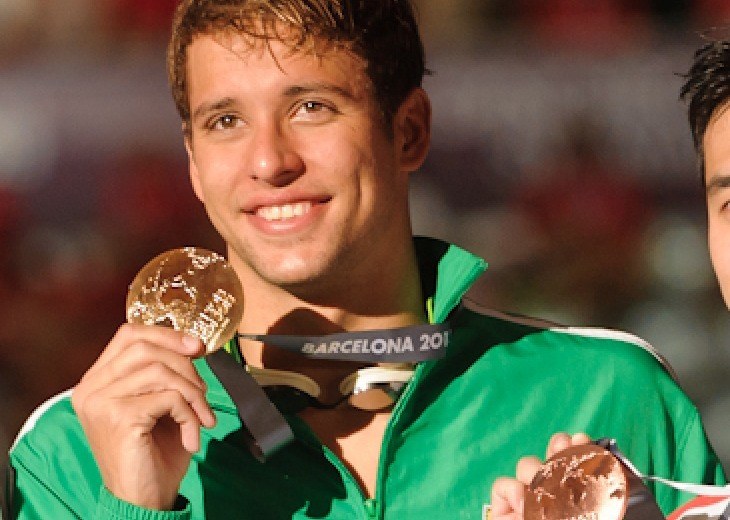 Chad le Clos rose to global stardom in 2013, and still managed to impress in the pool. Archive photo via Victor Puig

Excluding the hokey-pokey nonsense of the new 200 meter relay record, there was only a single event in which the men’s World Record was broken, and that was in the 200 Short Course Meters butterfly.

The swimmer that broke that record is Chad le Clos, and stacked up along the rest of his 2013 accomplishments, was good enough to win his first ever Swammy award for Male Swimmer of the Year in 2013.

2013 was an important year for le Clos. After 2012, his international fame grew as ‘the man who beat Phelps in the 200 fly at the Olympics.” The signs of his sudden stardom were everywhere. he was named an official ambassador for the 2014 Youth Olympic Games, won awards-on-awards-on-awards, and took Phelps’ place as the official poster-boy of Omega Timing – a spot that had previously been held by the great Phelps.

In addition, his 24 wins at the FINA World Cup Series were the most of any male athlete (5 more than Vlad Morozov). He also broke the South African National Record in the 100 fly in long course and short course, and of course there was the aforementioned 200 fly SCM World Record which he swam in 1:48.56 at the Singapore stop of the World Cup Series. That World Record was particularly impressive because of the timing: most of the SCM World Records came early in the World Cup, in Berlin or Eindhoven when everyone was still feeling pretty fresh coming off of the World Championships.

Le Clos’ World Record came on November 5th – rebreaking his own record done in Eindhoven by half-a-second. The timing of that swim makes it all-the-more impressive.

Unless/until Phelps returns, Le Clos seems to be in command of the world’s butterfly scene. He’ll certainly go unchallenged at the Commonwealth Games next year, as no other Commonwealth butterflier even semi-finaled at Worlds. He’ll probably have to do more than just win those two races at that meet next year to repeat, however. He’ll have a chance against the Chinese and American butterfliers at the Pan Pac Championships as well, and further has shown the propensity to really broaden his events next year.

Expect him to challenge for at least 5 individual titles, perhaps, in Scotland next year at the CG’s before settling things back in for Pan Pacs.

Sun Yang – the only man to win three individual golds at the World Championships, Sun’s drama-filled year out of the pool can’t inhibit what he did in the water. He swept the 400, 800, and 1500 freestyles at Worlds, and between his various meets showed some unprecedented speed as well. If his gold-medal winning times at Worlds were closer to his bests, he probably would’ve taken this award.

Vlad Morozov – Though his Worlds medal count wasn’t as big as the other men on this list, Morozov did win a silver in the 50 free in Barcelona and broke Alex Popov’s National Record in the process. He was part of what was an overall incredible year for the Russian Federation, won 21 World Cup races, and took Europe to task with 7 gold medals at the 2013 European Championships (50 free, 100 free, 100 IM, and all four relays). Morozov completed his peripheral resume with an incredible NCAA Championship meet in March, swimming the fastest 100 yard freestyle in history, and the fastest 50 yard freestyle from a relay split in history (he was a 17!).

Ryan Lochte – Lost in the knee injury and the reality TV and the overall transformation of Ryan Lochte into a global brand was the fact that he actually had a very, very good year. He won World Championships in the 200 back and the 200 IM, including running away with a 200 IM: taking both titles in what had seemed to be very, very deep fields.

Though he came up short of the podium in the 200 free, he did add a silver in the 400 free relay and a gold in the 800 free relay as a member of the finals teams, though a DQ kept him from another relay gold. While it’s hard to weigh his relay opportunities on the American team as heavily as we would individual medals, it still was more swims that Lochte had to put on his crowded schedule. He also was the victor of the 2012-2013 USA Swimming Grand Prix series on the men’s side.

After Katinka Hosszu was announced as Swimswam’s Female swimmer of the year (personally, Ledecly is my choice), it was predictable that Le Clos would get the title for the men. Not that I disagree with it, in fact, Le Clos would also be my personal choice, even if by not much (against Yang and Lochte). Yang was in stronger position in terms of individual worlds golds (3), with similar winning times quality (979, 941, 966 FINA Points for 400/800/1500 free respectively) compared to Lochte (952 and 975 for 200 back/IM), While le Clos only got 928 each for both 100/200 fly. However, I think relying on FINA points alone to measure quality between swims across different distances and strokes is… Read more »

Please ignore my post above. I accidentally clicked on post comment before I made edits. After Katinka Hosszu was announced as Swimswam’s Female swimmer of the year (personally, Ledecly is my choice although I do understand that Hosszu ‘s super domination of the World Cup series may be unprecedented, in addition to several WRs and second fastest textile times for her two Barcelona Golds), it was predictable that Le Clos would get the title for the men. And I quite like the idea that Swimswam take a differecent approach than the traditionals one measurement most pundits use: highest quality LCM swims and individual golds at the the major (ie. Worlds) Not that I disagree with it, in fact, Le Clos… Read more »