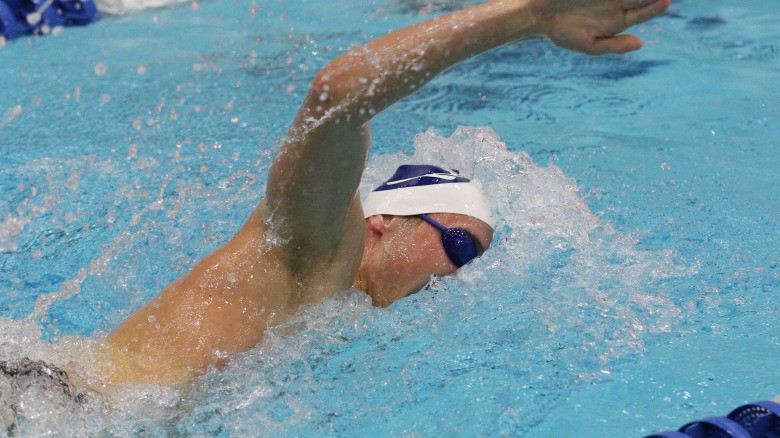 The 2020 Russian Swimming Cup will be held this weekend in Obninsk and feature World Champions Evgeny Rylov and Anton Chupkov (above).

It appears the heats session is where it’s at for these 2020 Chinese Championships, as the meet’s most eye-popping performances have transpired there.

Watch how Zhang Yufei cranked out a monumental time of 55.62 in the prelims of the 100m butterfly while competing at the 2020 Chinese Swimming Championships.

The men from Pennsylvania State University cruised to victory over the visiting University of West Virginia in their meet Friday, January 18th. PSU, who would ultimately win 11 of the 16 events contested, got things started with a victory in the 200 medley relay, recording a time of 1:29.61, out-touching WVU, who finished in 1:30.02. Though the relay was close for the first 150 yards, freestyler Gabe Castano from Penn State blasted a 19.66 to pull ahead of Merwane Elmerini of WVU, who posted a 20.11 as the anchor for the Mountaineers.

Castano later sprinted his way to victory in the 50, hitting the wall in 20.43, just ahead of Merwane, who touched in 20.59. Later, Castano took the 100 free in 45.23, edging teammates Will Robertson and Matthew Dinunzio, who finished in 45.58 and 45.65, respectively, completing a sweep of the top-3 spots for the Nittany Lions.

Though Penn State’s Hayden Harlow and Daly touched the wall first and second in the men’s 200 IM, recording times of 1:50.07 and 1:51.77, respectively, the points for the top three finishers went to West Virginia’s Philip Kay (1:52.66), Ben Brooks (1:54.36), and Josh Harlan (1:55.35) as both Harlow and Daly, as well as four other swimmers from Penn State were all entered in the race as exhibitions. Had Harlow’s swim counted for points, it would have been his second official win of the day after taking the 200 breast earlier in a 2:03.43, well ahead of runner-up Brad Johnson, also from PSU.

Penn State’s Nathan Schiffmann proved himself the strongest middle-distance freestyler of the day with victories in the 200 free (1:40.47) and 500 free (4:30.89). While Drew Damich from WVU nearly ran Schiffmann down in the 200, the 500 was a showing of pure dominance by Schiffmann, who led from start to finish and won by 7.5 seconds.

Divers Hector Garcia Boissier and John Crow finished first and second, respectively, on both 1 and 3-meter boards to round out PSU’s victory.

West Virginia closed the meet with a victory in the 400 freestyle relay, where the team of Merwane, Damich, Sam Neaveill, and Christopher O’Shea stopped the clock in 2:59.88. Though PSU exhibitioned each of its three relays, the team of Castano, Robertson, Dinunzio, and Eben Krigger still managed a time of 3:00.74, with a 44.96 lead off split from Castano.

Nittany Lion Relays
To start the meet off, the team of Liam Veregin, Brad Johnson, Matthew DiNunzio, and Gabe Castano placed first in the 200 medley with a score of 1:29.61. Penn State’s team of Tomer Zamir, Hayden Harlow, Zach Zwijacz, and Will Roberson took third in the event with a score of 1:31.74.

To conclude the meet, Castano, Dinunzio, Roberson, and Eben Krigger had the second fastest time in the 400 free relay (3:00.74).

Next Up
Tomorrow, the Penn State men’s and women’s swimming and diving team will return to the McCoy Natatorium from 8 a.m-10 a.m. when the team takes on Bloomsburg for Senior Day. The meet start time was moved earlier due to anticipated winter weather. Admission is free. Parking will be available in the East Parking Deck for $1 per hour.

The first intermission will feature the fourth annual Great Penn State Duck Toss, in which fans will have the opportunity to throw rubber ducks into the pool at hula hoop targets for an opportunity to win a TV. Further details will be available at the promotions table. Additionally, the men’s and women’s senior class will be honored during the second intermission.

Check GoPSUSports.com for coverage of the Penn State swimming and diving teams during the season. Follow the team on Twitter at @PennStateSWIM and on Facebook at facebook.com/pennstateswimminganddiving.

A fundraiser has been launched to support freshman women’s swimmer Nikolette Nolte  and her family for costs associated with her leukemia treatment. Any surplus funds will be donated to THON and the Jessie Rees Foundation to help others facing pediatric cancer. Donate at gopsu.info/nikistrong.

The Mountaineers earned five victories on the day, as the Nittany Lions earned a 173-122 victory at McCoy Natatorium. With the defeat, WVU fell to 4-2 in dual meets on the season.

“Overall, we had a very solid effort today,” WVU coach Vic Riggs said. “Our relays were strong and there were several individuals who improved their swims from last weekend. Our next step is to continue to improve as we get ready for the Big 12 Championship.”

Russo’s wins came in the 100 backstroke and 100 butterfly, and Armstrong’s was in the 100 breaststroke as the Mountaineers placed first and second in the event. Kay’s victory came in the 200 individual medley. The 400 freestyle relay team’s win came thanks to seniors Merwane El Merini and Drew Damich, junior Sam Neaveill and sophomore Christopher O’Shea.

On springboard, West Virginia placed third on both events. Freshman PJ Lenz earned a score of 298.80 on 1-meter, while redshirt freshman Jacob Cardinal Tremblay recorded a 330.00 on 3-meter. Also, on 3-meter, Lenz was fourth with a 318.90.

“The divers did very well today; we definitely made improvements from warmups to the competition,” WVU diving coach Michael Grapner said. “I always ask them to aim for 6-for-6 on their dives. Tonight, we missed a few opportunities, but we moved on and quickly rebounded on our next dives. As we look ahead to Big 12s, I’m hopeful this will give the divers the right motivation to prepare and to capitalize on training.”

The meet began with the 200 medley relay, where the Mountaineers finished second. Russo, Armstrong, Neaveill and El Merini touched the wall with a time of 1:30.02.

After junior Jack Frazier notched a fifth-place finish to lead WVU in the 200 butterfly with a 1:53.16, West Virginia followed with a second- and third-place showing in the 50 freestyle. El Merini finished second in 20.59, just ahead of Neaveill’s 21.02 to place third.

Sophomore Max Gustafson then touched the wall in third place in the 500 freestyle, with a time of 4:39.50.

The meet concluded with West Virginia’s victory in the 400 freestyle relay with a time of 2:59.88.

Friday’s meet was the Mountaineer men’s final regular-season competition before the 2019 Big 12 Swimming and Diving Championship, which is set for Feb. 27-March 2, in Austin, Texas. Prior to the conference championship meet, the WVU women’s team will take on Big 12 foe Iowa State on Saturday, Jan. 26, in Ames, Iowa.