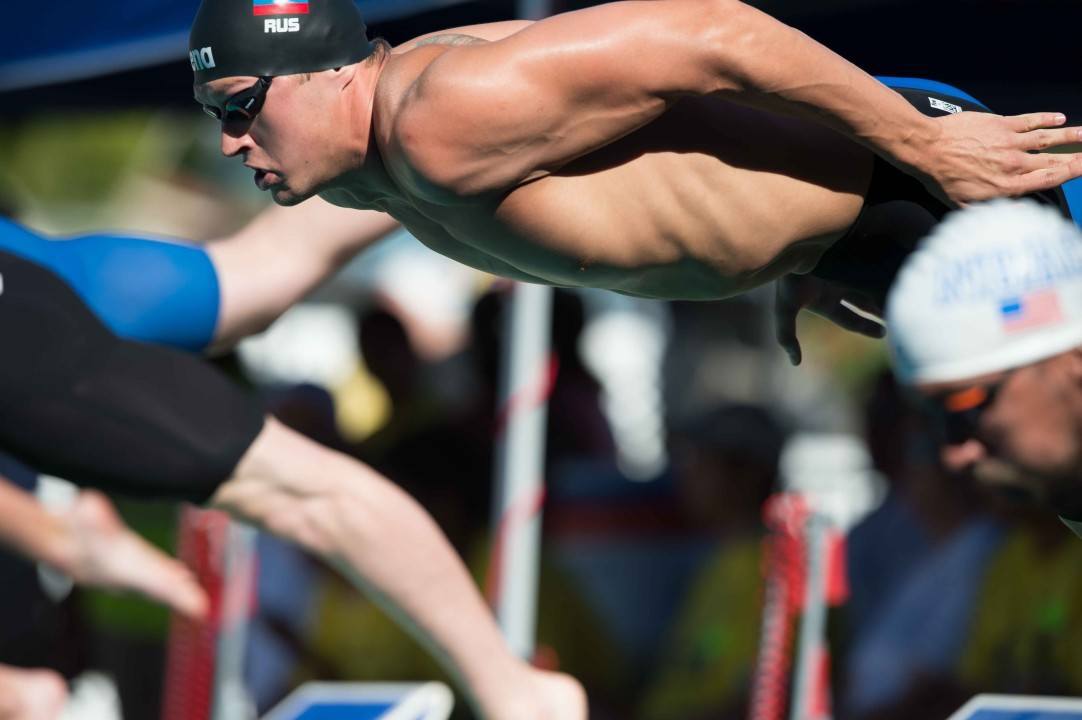 Nikita Lobintsev (above) and Vlad Morozov, with three Olympic medals between them, will have their Rio 2016 fates pushed off to the IOC. Archive photo via Mike Lewis/Ola Vista Photography

The international Court of Arbitration for Sport (CAS) has pushed the decision on two Russian swimmers removed from the Olympic Games that begin on Saturday to the International Olympic Committee (IOC) ad-hoc panel.

An independent report commissioned by the World Anti-Doping Agency (WADA), referred to as the “McLaren IP report,” found that Vlad Morozov and Nikita Lobintsev, along with Daria Ustinova, were involved in a Russian state-sponsored program to make positive doping tests disappear. Morozov and Lobintsev, citing many clean tests run by doping agencies outside of the control of Russia, have both chosen to appeal that decision to the CAS, while Ustinova has not.

The case, the first to be heard by the CAS in Rio (among 18 – already a new record for one edition of the Olympic Games), was heard in front of the IOC on July 31st. The case was adjourned, to allow the parties to provide additional information, but has now been pushed before the IOC’s three-member ad-hoc committee to decide their eligibility for the Olympics. Initially, the IOC had given international sports federations (IFs) the authority to make final decisions on athletes, but took back final authority after wildly-varying levels of enforcement by the IFs.

There were reports from lawyers and government officials in Russia that FINA would be making the final decision in this case, but FINA denied that, saying that it would remain up to the IOC.

Both Morozov and Lobintsev would be strong medal contenders if allowed to compete – Morozov individually, and both swimmers as members of Russia’s free relays. Morozov was the 2013 World Championships silver medalist in the 50 free and is a three-time World Champion in short course who has lived and trained in the United States since he was a teenager. Lobintsev is a two-time Olympic medalist, winning silver in Beijing on the Russian 800 free relay and bronze in London in the 400 free relay.

Of the 7 Russian swimmers removed from the Olympics for different reasons, only Morozov, Lobintsev, and Yulia Efimova have appealed their cases to the CAS so far. Efimova was un-nominated by the Russian Olympic Committee not because she was named in the McLaren IP report; rather, her expulsion was a result of another part of the IOC directive that any Russian athlete with a previous doping sanction be ineligible for the Olympics. Her case could set a precedent for the many other Russian athletes in different sports in a similar position.

This had turn into a game of “Hot Potato.”

No one wants the responsibility of this decision.

Both of these swimmers are good enough to affect/change the results of their events.

I was just thinking the same thing. The buck gets passed around until the start of the Games, just pray that it doesn’t end up on your desk. Ugh.

Send it to me. I would hand out lifetime bans like Trump hands out insults.

Well, if the IOC was pissed that WADA didn’t recommend to ban Russia from the Olympics full-stop, shouldn’t this be a no-brainer for the IOC to exclude them?

It’s the other way around.

WADA did recommend to ban Russia completely from the games full stop.

It was the IOC who created several conditions and asked individual sporting Federations to do the dirty work.

If only IOC had done what WADA recommended from the start, none of this drama would have happened.

Vlad is so guilty no one wants to new the responsible party to rule him out.