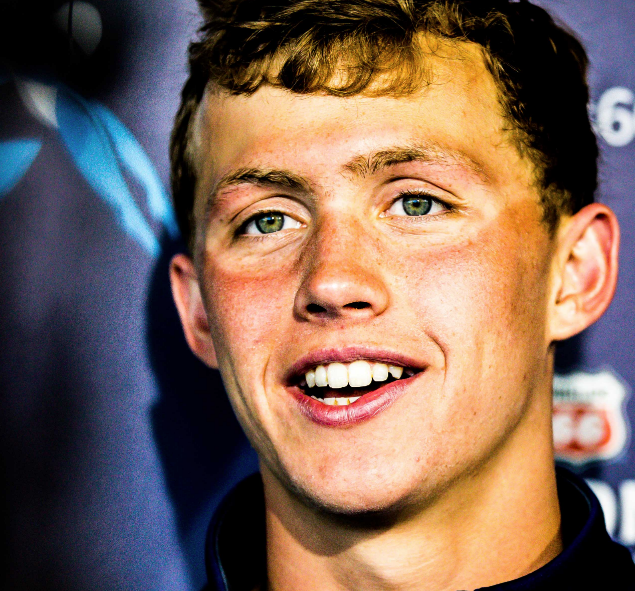 Racing this weekend at the Tim Myers Senior Meet in Oxford, US National Team swimmer Carson Foster swam the #2 time in the country in the 400 IM.

Foster, whose spot on the National Team was secured via the 200 and 400 IM, swam a 3:43.84 in the 400 yard IM, which wound up being his only individual race of the weekend after he scratched the 200 fly. The only swimmer nationally who has been faster this season is University of Georgia senior Clayton Forde, who swam a 3:42.14 this weekend at the Tennessee Invite.

Foster’s lifetime best is a 3:40.86 that was done at last year’s Winter Junior Championships East. This swim is easily his best outside of a big championship meet.

His Mason Manta Rays teammate Adam Chaney, who is the top (publicly) uncommitted swimmer in the high school class of 2020, swam and won the men’s 50 free in a new Meet Record of 19.82. That broke the old record of 20.23 that was set in 2011 by Josh Fleagle.

Any confirmation if Foster is going to Winter Nationals or Winter Jrs ( Or I guess both ). Curious if he is going to focus on LCM or still manage both. What awesome swims for the whole group though!

For the love of god, let’s hope he is going to swim LCM against quality competition (Kalisz et al) instead of not being challenged at Juniors for like his 9th time or something. Only get one chance to do something special in Omaha in seven months. Too much can happen in four years. Carson needs to worry about Carson. Not about winning more events at Juniors.

Ha! I see that side of it. He’s still just a teenager though, gotta keep it fun? I wonder if USA Swimming identify someone like him and “recommend” he do LCM meets to focus or just let him be him. Just a thought.

He’s planning to do both meets.

How is swimming a 400 LCM IM — under any circumstances — keeping it fun?

He is shaved and tapered?

If he’s going to Juniors and US Open in December, pretty safe bet he’s not rested for the the “Tim Myers” Meet. (Headline is misspelled)

Likely not. He’s been swimming so well recently that you can bet he’s going personal bests when he’s tapered. As this wasn’t a personal best, it was likely an untapered, unshaved swim.

Has to go through puberty first. He’s going to be something.