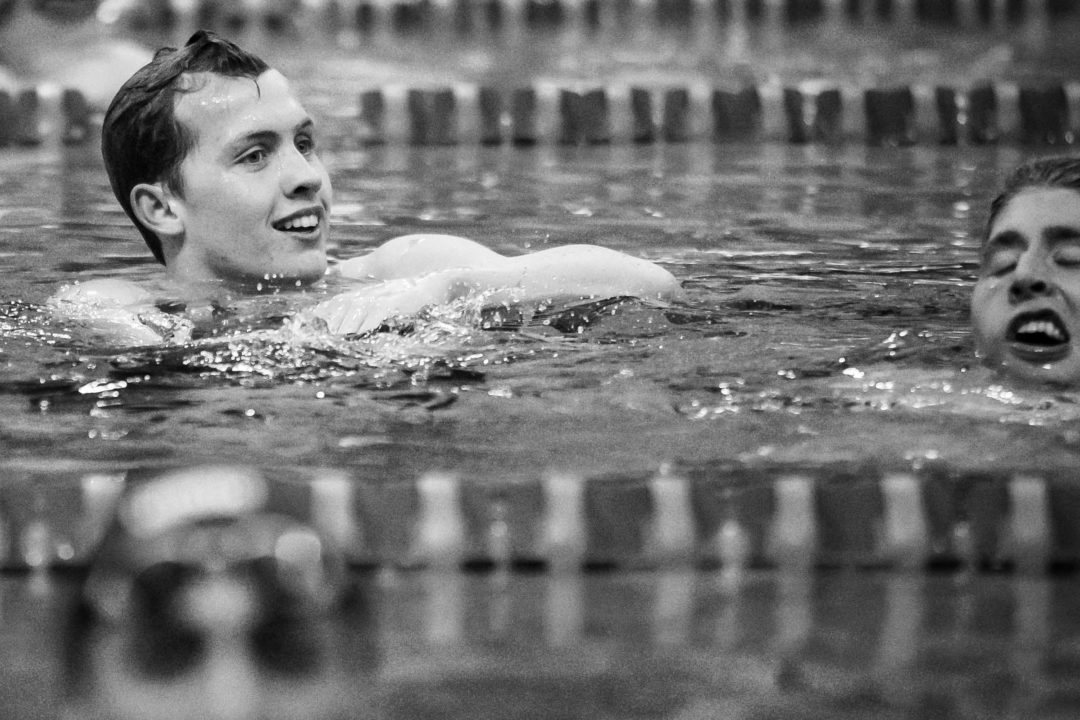 Foster, one of several 18 & under male swimmers aiming to make the USA's 2020 roster, talks about graduating high school early to focus on Olympic Trials. Current photo via Jack Spitser/Spitser Photography

The 2021 Swimming Australia Olympic Trials get underway today with heats of nine events. Follow along for live coverage and updates.

It’s been two decades since a male swimmer 18 years old or younger has made the USA Olympic Team, but there’s a small squad of talented up-and-comers who are looking to change that this year, and one of the biggest names in that group is 18 year-old Carson Foster.

Foster first started generating headlines back in 2012, when he broke a National Age Group record as a ten year-old. Four years later, he was one of two 14 year-old boys to qualify for the 2016 Olympic Trials, where he finished 43rd out of 92 in the 400 IM. He’s been on a roll ever since then, representing the USA at Junior Worlds and Junior Pan Pacs, knocking down national age group records and national high school records, and hanging with the veterans in some of the toughest races at Nationals and in the Pro Series.

Rumors started circulating last year that Foster was planning on graduating high school early and possibly moving to Austin, Texas, to train with the University of Texas Longhorns, to whom he verbally committed nearly two years ago as a high school sophomore.

SwimSwam caught up with Foster to ask him exactly what was going on with his education and his training between now and Omaha. Sure enough, Foster says that he is, in fact, graduating from high school early, with his last day of class coming on the Monday before the U.S. Open started. He was exempt from final exams due to having straight A’s.

Foster tells us that he first started considering graduating early back during sophomore year. He had been attending St. Xavier, but the private school’s attendance policies conflicted with Foster’s absences for events like the World Cup. After he transferred to to Cincinnati Sycamore, a public school, his guidance counselor told him that he had enough credits to graduate early if he chose to do so.

At first, he didn’t think it was necessary, but after a big summer of 2018, in which he earned four gold medals at Junior Pan Pacs, he reconsidered his plans, and decided that he had enough of a shot at making the US Olympic Team that it would be worth it to graduate a semester and not have to worry about school for the six months leading up to Olympic Trials.

Initially, he contemplating leaving home after graduation and heading to Texas to train, but after talking with his parents, Texas coaches Eddie Reese and Wyatt Collins, and Ken Heis, head coach of Foster’s club team, the Mason Manta Rays, Foster decided that it would make more sense to stay at home and stick with what was already working.

“We decided that what we’re doing now is working, and I feel most comfortable staying at home with my parents, not doing the big lifestyle change of going to college, and keeping everything the same with my training, and Eddie and Wyatt were super supportive with my decision-making and supported me 100%.”

The decision means no Ohio High School State Championship meet for Foster after he set the National High School Record at last year’s meet in the 200 yard free.

While he’ll be operating out of home as a “home base,” Foster’s plans for the spring includes lots of travel, including trips to the Olympic Training Center in January and at least one another time, and another trip with some other national and junior national team members. Part of the reason for the travel is to find opportunities to train long course. The Manta Rays’ home pool isn’t 50m, so Foster and the rest of the Rays train in either 25 yards or 25 meter configuration for most of the year, only having regular access to a 50m pool during the summer.

Foster will also take the spring to decide exactly which events he’ll swim at Olympic Trials, explaining that this past summer’s busy junior World schedule has him thinking about paring down his lineup a bit, but that the IMs are definitely a focus. Last season, Foster made the senior National Team in both the 200 IM and the 400 IM, and his 1:46.10 anchor leg on the USA’s junior world record setting 4×200 relay at Junior Worlds puts him into the conversation for a spot on the Olympic 4×200 team, as well.

While nothing is ever guaranteed in swimming, Foster’s experience in having a previous Olympic Trials under his belt, ability to focus on training for the next six months, and versatility has him set up well, along with other 18&U stars like Luca Urlando, to become one of the youngest men to make a US Olympic Team in twenty years.

St X: We are renowned as one of the elite high school swimming programs in the nation.

also our kids are good because all the local clubs make them that way for the high school season!

This will be the most ignorant comment on the interest for the rest of the year.

Fletchmacfletch – if you think that this will be the most ignorant comment on the *internet for the rest of the year, then you definitely don’t spend enough time on the internet.

He only has straight As. We have to make sure his academics don’t suffer. /s

Straight A’s yet fails to make the Scholastic All American lists for 2019 and 2018.

42
-7
Reply
The Man Himself
Reply to  Speed Racer

You have to apply to be on those lists lmao. My guess is. Carson isn’t too concerned with mere titles that are meaningless when compared to his long list of other accomplishments.

32
-20
Reply
Speed Racer
Reply to  The Man Himself

Regan Smith found the time but she probably isn’t as busy as Carson. I think she was actually named for having a perfect 4.0. Several other Mason Manta Ray swimmers can be found on the lists so it is encouraged by their club.

Being in Ohio he had to overcome the Archaic rules where they limit USA-S participation. Met him at Juniors and was very respectful. Wish him the best. Glad to see Mason has a outdoor 50M pool in the works . I wish Mana Rays continued success. StX probably just wants to keep students around for tuition.

U can travel just not 16 days one semester

Funny how that works…they’ve been elite for decades with the same attendance policies. Thousands of kids have gone through that program and succeeded without receiving special treatment. Even better was the omission that St. X doesn’t allow early graduation. Look up Paris Johnson as an example. Good for the school for sticking to their guns to remain an ELITE academic institution while dominating HS swimming.

They’ve even had olympians and international champs! National high school swimmers of year and 5 NISCA champs in a row with strong academics

Gotta change with the times. Free to go to public school and he shouldn’t be looked upon negatively for that choice.

Some things are timeless- integrity, honesty and standards

No one looks down on Carson- good luck to him. St x wasn’t a good fit for him and his travel.

Please leave st X out of the discussion of the fosters.

It was more just the oddity of a school which proclaims itself a swimming power not making the most of the opportunity to have possibly the first male high school Olympian in 2 decades amongst its students. From the outside, in terms of message discipline, it seems odd.

Paris Johnson is #1 ranked OT prospect in high school too. Should he have been allowed to graduate early because he might make the hall of fame someday?

you have no clue about integrity and standards, timeless values.

One kid doesn’t change school values which have existed since before the Civil War.

Y’all are too wild.

Ah, man, you cut it off. It was just getting good.

swim parents just love to go at it

Anyone who holds an opinion that does not synchronize with DOCONC’s has “no clue about integrity and standards.” Seems a tad “judgy”, no?

And the thing that makes USA Swimming great is that even Caeleb isn’t guaranteed a spot.

Kid is making the team