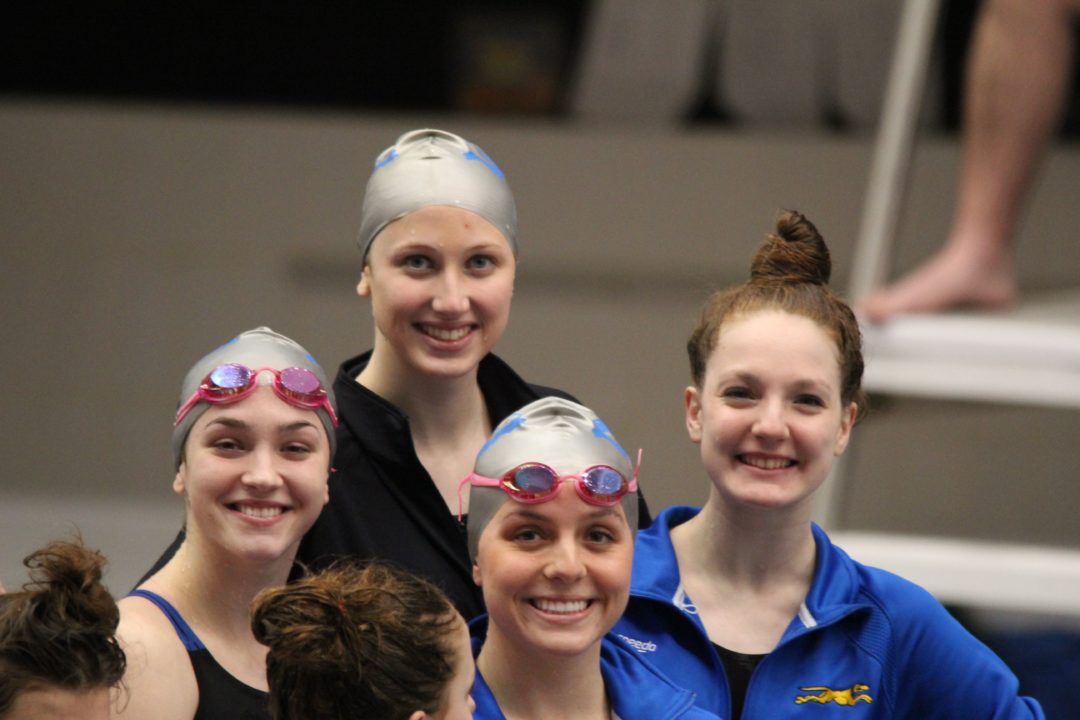 After prelims last night, the Indiana High School Girls State Championships are looking like a full-on assault on the record books. 5 records fell in 11 contested events, with multiple swimmers under the old records in several races. In addition, 4 more records look dangerously close to falling with athletes sitting well within striking distance. Carmel was on a mission to win their 28th consecutive Indiana State Title. Read about last night’s prelims here.

Carmel High School started off the afternoon in route to their 28th consecutive state championship by breaking the National Public High School record in the 200 medley relay. The team of Hanna House, Alex Clarke, Veronica Burchill, and Amy Bilquist touched the wall in a record time of 1:40.83. Crown Point really challenged the Carmel girls through the 150 but Bilquist ran away with the last 50 freestyle. Her split is messed up in the results, so we will not be able to find out her actual split until later.

Carmel High School’s Claire Adams broke the second Indiana State Record of the session for Carmel, making them 2 for 2 in going for state records. Adams touched the wall with a time of 1:46.95, breaking her own state record set last night in prelims by .01. Crown Point freshman, Hannah Kukurugya, finished second at 1:47.49. Summer Brown from Westfield finished third with a time of 1:48.85. Another stand out freshman from Fishers HS, Lauryn Parrish, finished fourth at 1:48.98. In fifth place was Olivia Treski with a time of 1:49.81, Emily Moser was 6th at 1:51.07, Emily Saugstad took 7th at 1:51.74, and Kendall Smith finished 8th with a 1:52.57.

Carmel freshman Morgan Grout won the B-final with a time of 1:51.04.

Abbegayle Schneider from Fishers HS won the B-final with a time of 2:04.01.

Carmel won their 3rd event of the meet with a 22.17 in the 50 freestyle from Amy Bilquist. Last night, she earned the top spot in prelims with a 22:15. She was just off of the National High School Record set by Olivia Smoliga at 21.99. Zionsville’s Alex Cleveland also was under the previous state record prior to the meet. She finished second with a time of 22.68. Veronica Burchill was second at 22.91, Clara Baggett finished fourth at 23.29, and Rachel Hayden and Vanessa Krause tied for fifth at 23.35. Robyn Clevenger finished seventh with her time of 23.50, and Mary Beth Bloch finished eighth at 23.75.

Racheal Bukowski from Crown Point HS won the B-Final with her time of 23.73.

Crown Points Aly Tetzloff won the girls 100 butterfly with new meet record time of 52.70. Bre Robinson, the sister of the former state record holder, finished second with a time of 53.77. Vanessa Krause touched third with a time of 53.84, Nicole Smith was fourth at 53.90, Taite Kitchel touched fifth at 54.43. Finishing sixth at 54.66 was Christine Jensen, seventh at 55.02 was Hanna House, and in eighth was Robyn Clevenger at 55.63.

Reagan Cook from Hamilton Southeastern HS won the B-Final with a time of 55.91.

Amy Bilquist won her second event of the day with a new Indiana State record of 48.93! Alex Cleveland finished second at 49.76, and Rachel Hayden finished third at 50.39. Clara Baggett was fourth at 50.84, Lauryn Parrish touched fifth at 51.03. and in sixth was Kendall Smith at 51.12. At 51.12 in seventh place was Emily Saugstad, and finishing eighth at 51.96 was Mary Beth Bloch.

Warwaw’s Brenna Morgan won the B-final with a time of 51.64.

The Carmel High School girls team added another win and National Public High School Record with a 1:31.37 in the 200 freestyle relay. The team of Amy Bilquist, Claire Adams, Hanna House, and Veronica Burchill lit up the natatorium! Penn High School finished second to Carmel with a 1:34.21. IMer and Breaststroker, Bethany Galat, led off for Penn with an incredible 22.51, touching out Carmel’s elite sprinter, Amy Bilquist. Center Grove finished third with a time of 1:35.10.

Caren Ingram from Westfield High School won the B Final with a time of 56.63.

The 100 breaststroke had to be one of the most exciting individual races of the meet. Bethany Galat, the 200 IM champion and 2013 junior national champion in the 100m breaststroke went head to head with Lily King, the 15-16 NAG record holder. It came all the way down to the finish and the girls had the whole crowd on their feet. At the touch, Bethany Galat won the race with a 59.66. King was just off her best time, touching at 59.99. Both girls were under the previous state record time of 1:00.13.

Following the 200 freestyle relay, we knew Carmel had a chance of making history. Bolles School is the only other high school team in history to break all three National High School Relay records in one meet, and Carmel would be the first girls team in history to pull it off if they could break 3:22.85. After prelims last night, three teams were within two seconds of the national high school record, and Carmel was seeded third.

When the teams dove in, Carmel was off to a good start, they had the lead at the 100. That did not last long, however, as Crown Point threw down incedible 2nd and 3rd legs to pull ahead from the field. We knew the record was going to come down, the question was just by how much. It looked as if Crown Point was going to win when Carmel’s Claire Adams dove in for the anchor leg. With 25 to go, Adams ran down Crown Point, splitting 48.70 to take the lead back, win the event, and claim their third relay record. They touched the wall at 3:21.20. What I still can’t get over is that Carmel’s top sprinter who posted a 48.96 in the individual 100 freestyle, wasn’t on this relay!!

Carmel High School won their 28th consecutive Indiana High School State Championship. There were 9 Indiana State Records broken and 4 relays that were under the National High School Record times. This was the fastest meet in Indiana history and a very exciting meet to watch! The amount of depth was comparable to a college conference meet, and with the talent on display, it had the feel of a college meet.

It was hard to decide who should be the Swimmer of the Meet so I chose three:

Fantastic results from the Indiana State meet. Anyone on your staff covering the KY State Boys/Girls Meet this weekend (Feb 28/March 1)??