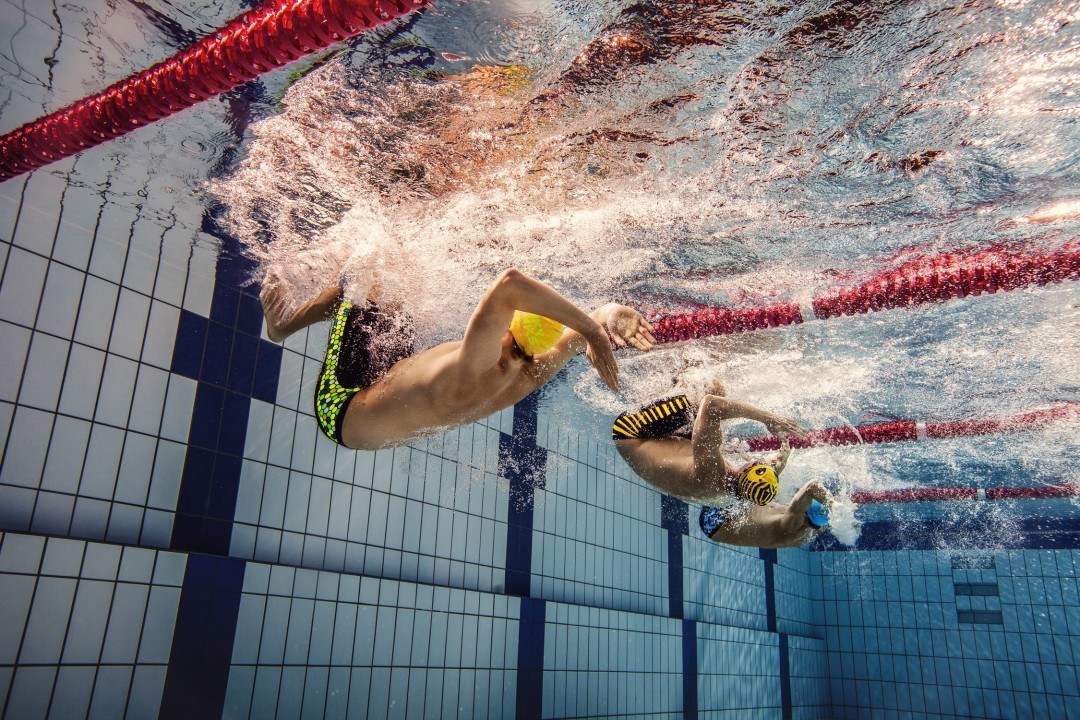 Bearing a club logo on his cap instead of a high school monniker, New Jersey High School swimmer Rich Fortels found himself DQ'd in one race, but not another at the Greater Middlesex Conference Championships. Stock photo via stock (courtesy of Funky Trunks, Funkita)

A confusing series of events taking place at last week’s Greater Middlesex Conference Championships in New Jersey left one Monroe High School swimmer disqualified for an event in which he broke the meet record.

In a unique situation, Latvian-born Rich Fortels, a senior at Monroe High School in Monroe Township, NJ, competed in the conference meet as an independent swimmer, as was permitted under league rules since Monroe does not have an official swim team.

However, what was not permitted under league rules, was the fact that Fortels wore a swim cap bearing his club team’s name, Peddie Aquatics, as opposed to a high school. This violates the National Federation of State High School Association rules, thus rendering the cap illegal, even though the piece of gear offers no competitive advantage.

Of note, Monroe did not provide its “student-athletes who entered conference championships with caps or swimsuits for the simple reason that the school does not field a team, thus it has no uniforms available.”

The confusion comes in, however, in that at the meet, Fortels was called out for the disqualification in one event, but not another. Swimming in his club cap, Fortels scored a first-place finish in the men’s 100 freestyle (46.73), with no one apparently noticing his cap displayed his club team’s monniker.

The senior then raced the 100 backstroke, where he also took first place (51.30), clearing a new meet record. In that race, however, while wearing the exact same cap, Fortels was called out for a disqualification due to the cap not bearing a high school name.

Said James Grimm, an NJSIAA official, “the kid was wearing a club cap at a high school meet and that’s against the rules.” This explains the disqualification in itself, but not the inconsistency of the fact that his 100 freestyle race win still stands.

Obviously confused by the cap drawing a DQ in one race yet not the other, Monroe Athletics Director Greg Beyer said that “Fortels still doesn’t understand and he’s pretty upset about it, and he should be.”

Continued Beyer, “What you are talking about is the spirit of a rule. I understand the rule, but having a (Peddie Aquatics) logo on the cap is not going to affect how you swim.”

Additionally, the Athletics Director for St. Joseph Athletics, the team who would benefit the most should Fortels indeed be deemed disqualified in his 100 free race, believes that both of Fortels’ race wins should stand.  “We’re all about competition,” said Smith. “If there’s a kid out there that’s better than us, he deserves (first place and the meet record). I would automatically say that whatever he achieved he deserves.”

Metuchen Head Swim Coach Jim Thomas concurred, saying, “What happened to the kid from Monroe is a shame. He’s a good kid, just trying to swim in the county. I feel bad it even happened to him. I know rules are rules, but in this case it was a mistake. The coach didn’t know because he/she is not a swim coach. I would have no problem if they could reverse the decision and help the kid out.”

Of note, with no official swim team, Fortels was accompanied by Traci Rickert, the boys track and field coach, in the capacity of his school board-approved mentor.

Wardlaw-Hartridge Athletics Director Karl Miran, who served as the acting tournament director for the meet said that Fortels simply needed to have turned his swim cap inside out to conceal the Peddie Aquatics logo to avoid disqualification.

Carl Buffalino, Conference President, indicated that the league’s executive committee will review Monroe’s appeal and could issue a ruling as early as Thursday.

Just another day in the life of high school swimming.

I don’t agree with the rule, but sure, not following it results in disqualification. HOWEVER, in this case, how was he to know? His school doesn’t have a team, his “coach” was a track coach, etc. If it can be proven that he should have known this rule (i.e. if the officials make a point at the meet to tell any unattached swimmer not to wear a club cap), then the DQ should stand, but I doubt that there is any way he could have reasonably been expected to know that. Gets even more unreasonable after getting away with it in his first race. Going into that 100 back, he had every indication that wearing his club cap was allowed.

sven – I think this is a good perspective, really, and I hope that’s the tact they take when they approach this situation. I sit here and think “wow, his cap has no impact on his performance,” but at the same time, as a high school coach, understand the need for this rule to exist, because if it didn’t the pool would just be full of club caps.

In a perfect world, it would be nice if the official noticed it and mentioned it before his race, or at least brought it up in the cocahes’ meeting. I don’t believe they’re required to, though, and so I wouldn’t hold it against the official for following the rules as written, either.

Any meet I have been to the officials always warn them first if their is any wardrobe infraction. This was also the case with jewelry(although its legal for them to wear jewelry now). The meet referee would warn the swimmer or the coach if they saw jewelry. If they still swam with it then they got disqualified. Same thing with suits if they were wearing an illegal one. You also have to remember that the officials at these meets are parents of the kids swimming most of the time. They will make a dq if it is going to benefit their child or a child from their team. Happens all the time.

As an alum of St. Joseph High School, where Smith is the Athletics Director, it’s sad to see this happen again. A few years earlier, in the girl’s GMC meet, a girl was disqualified for the same reason (she also swam for a school without a team). This case is different though because there is a clear continuity error. It confuses me how he was caught with the cap in one race and not the other. I do agree with Braden though, officials at the high school level should notice this and take action before the race. It’s a shame that a great time like that and a meet record simply don’t matter because of an initial mistake by the… Read more »