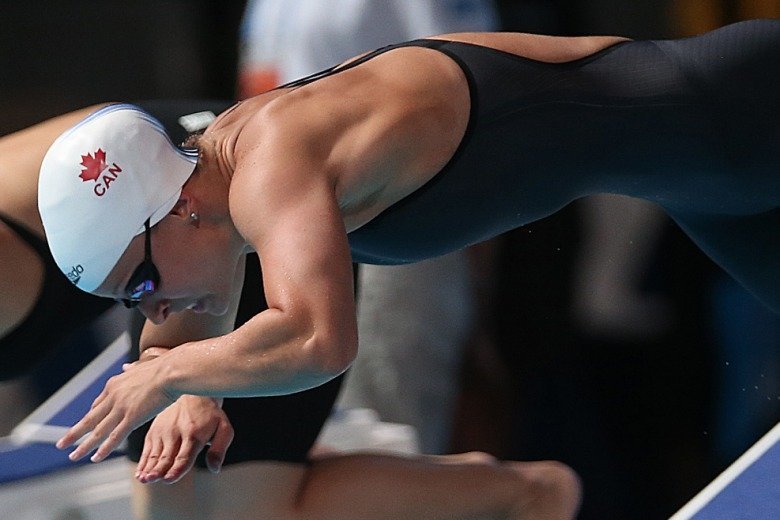 The University of Toronto will play host to two swim meets this weekend, with the one-day University Challenge Cup setting... Current photo via Swimming Canada/Ian MacNicol

In the women’s 100 freestyle final, Penny Oleksiak managed to cut a tenth off of her Canadian Record, swimming a time of 52.59 for 4th place.

While they were left off the podium for a 4th place finish, the Canadian women managed to deliver a national record-breaking swim in the Tokyo 2020 4×200.

The University of Toronto will play host to two swim meets this weekend, with the one-day University Challenge Cup setting the stage for the Canada Cup – Toronto.

The meets will take place at the Varsity Pool at the University of Toronto Athletic Centre (55 Harbord Street), with the University Challenge Cup set for Thursday, followed by the Canada Cup Friday and Saturday.

National team members Coleman Allen and Luke Peddie are part of a strong men’s side for UBC, ranked second behind the host Varsity Blues. National team members Zack Chetrat and Chris Manning headline the U of T contingent. Other schools in action at the Canadian Interuniversity Sport meet include McGill, Calgary, Guelph, Ottawa, Western and Alberta. Among the names to watch are national team member Russell Wood and Irish Olympian Fiona Doyle with Calgary.

Many of the top swimmers from the University Challenge Cup will remain in Toronto for two days of short-course action in the Canada Cup – Toronto. A total of 470 swimmers from 69 clubs across six provinces will compete on Friday and Saturday.

Other well-known names who will be on hand include Olympians Katerine Savard of Pont-Rouge, Que., Andrew Ford of Guelph, Ont., David Sharpe of Halifax, Zsofi Balazs and Martha McCabe of Toronto, and Stephanie Horner, Barbara Jardin, Audrey Lacroix and Victoria Poon of Montreal.

Preliminary heats begin at 9:30 a.m. with finals sessions starting at 6 p.m. Opening ceremonies at the Canada Cup will begin at 5:45 p.m. each night, with several awards presentations being made to kick off Swimming Canada’s Big Splash Awards Week. On Friday Swimming Canada will present the Victor Davis Awards as well as the Youth Swimmers of the Year and Junior Swimmers of the Year while Saturday will feature the presentation of the national stroke awards.