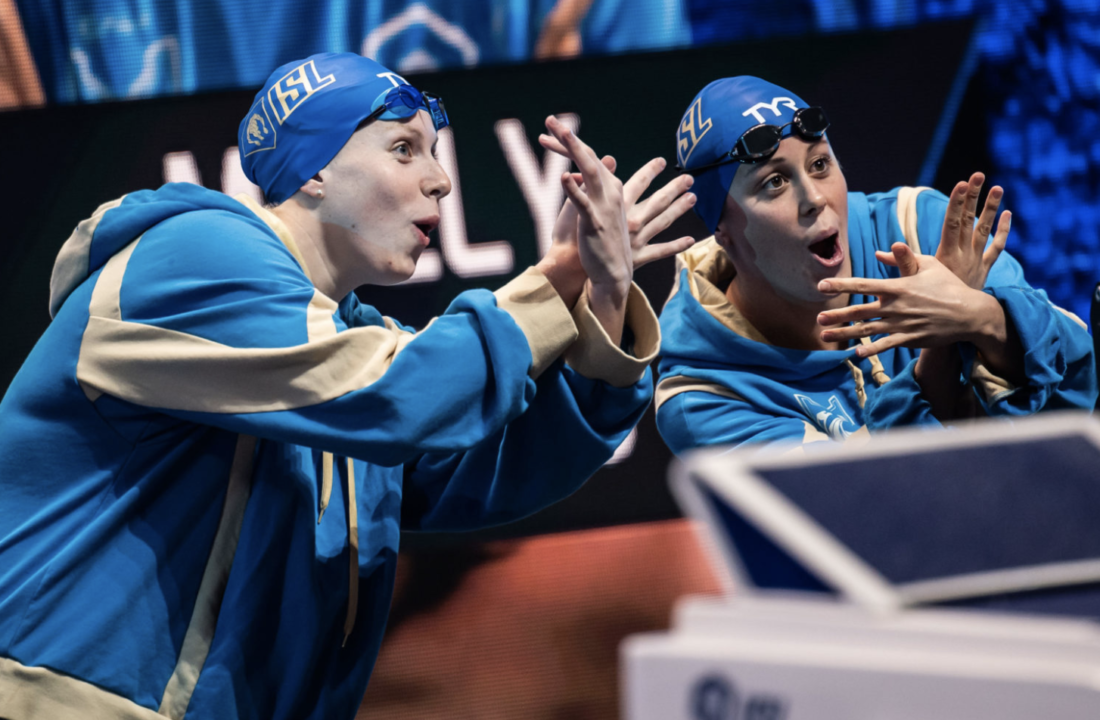 The Cali Condors will rely heavily on Lilly King and Molly Hannis in the women's breaststroke skins on the final day of the ISL season. Current photo via Mike Lewis/Ola Vista Photography

Following their victories in the 400 medley relays, the Cali Condor women and Energy Standard men have both selected breast as their stroke of choice for tomorrow’s skins events.

Breast The Right Pick For Cali?

The Cali women have gone undefeated in the medley relay all season, and have selected breaststroke all but one time, going with backstroke in Match 4.

That worked out well for them, with Olivia Smoliga and Beata Nelson going 1-2, but they clearly favored their duo of Lilly King and Molly Hannis to get the job done in the final. Nelson has also been branching off into the 50 fly and 100/200 IM as the season has unfolded, which may be another factor in the decision.

Despite that, the women’s breaststroke field is incredibly top-heavy here, with Energy Standard’s Benedetta Pilato and London’s Alia Atkinson coming close to beating King in the 50 breast on day one.

With the team race looking like a battle between Cali and Energy Standard, perhaps the Condors should’ve gone with backstroke, where Smoliga (25.74 this season) has a larger advantage over Energy Standard’s top option (Mary-Sophie Harvey hit a best of 26.19 today) than King does over Pilato.

The Condors opted to go with Sherridon Dressel in the 50 back here in the final, with the former Florida Gator placing fifth in 26.58. Smoliga was the only swimmer in the field sub-26 in 25.83. Nelson has been as fast as 26.55 in Match 4, while Erika Brown has raced the event three times, hitting a best of 26.62 in the semi-finals.

The Energy Standard men had a phenomenal performance in the 400 medley relay, putting up a time that’s faster than the world record in 3:18.28 (it won’t officially count due to the fact the team had swimmers from more than one country).

With that win, they opt for breaststroke skins, possibly pinning their hopes of a title defense on Ilya Shymanovich.

Shymanovich won the 50 breast over London’s Adam Peaty by .02 during the opening day of competition, clocking a new Belarusian National Record of 25.48, and has advanced to the final round in both of his skins appearances so far. However, he has yet to win, falling to Iron’s Emre Sakci in Match 7 and then succumbing to Peaty in the semi-finals.

With Caeleb Dressel looking like a near lock to win a freestyle or butterfly skins, it came down to either this event or back for Energy Standard. While their backstroke strength is immense, with Kliment Kolesnikov fresh off setting the world record in the 100 back and Evgeny Rylov a prime threat for this format (not to mention having world record holder Florent Manaudou in their back pocket), they’ve opted to rely on Shymanovich and Lima on breast.

The Condors have some hope, however, as Nic Fink wasn’t far off his American Record in the 50 breast in 25.87, and Dressel has shown he’s capable of advancing to the final round of breaststroke skins, having done so back in Match 4. However, Dressel will have his work cut out for him tomorrow — six men were faster than his personal best time of 26.08 in the individual 50 breast on day one.

The London Roar, despite looking like they’re destined for third in the team race, could spoil the party here with a formidable 1-2 punch in Peaty and Kirill Prigoda, who have been as fast as 25.48 and 25.87 this season, respectively.

This is kinda interesting.
I thought Cali will pick back for sure. Energy is not good at back. London is good at back but not a threat to the title.

Uh – did we forget Kolesnikov who has a hot hand now?

Pilato and Atkinson for the upset!!! …. hopefully!

Maybe in R1 but I think they’ll add too much time each round to win.

Condors could actually do pretty well in the men’s skins. Maybe Energy should have gone with back considering how good their guys have been so far in those events.

Looks like Cali and Energy are not really targeting at each other lol, otherwise they will both choose back.

Cali is good at back. They have Coleman Stewart.

You forgot about Dressel 26.0 in the 3rd round of breast skins earlier this season?

Dressel is angry at himself for not breaking 20 seconds in the 50 free today. He’ll use that anger to summon three straight 19.9s to win the breaststroke skins tomorrow. It will be amazing, years from now scholars who study swimming will call it “Farris like”.

History in the making, Dressel goes so fast that the world record time turns into a negative number.