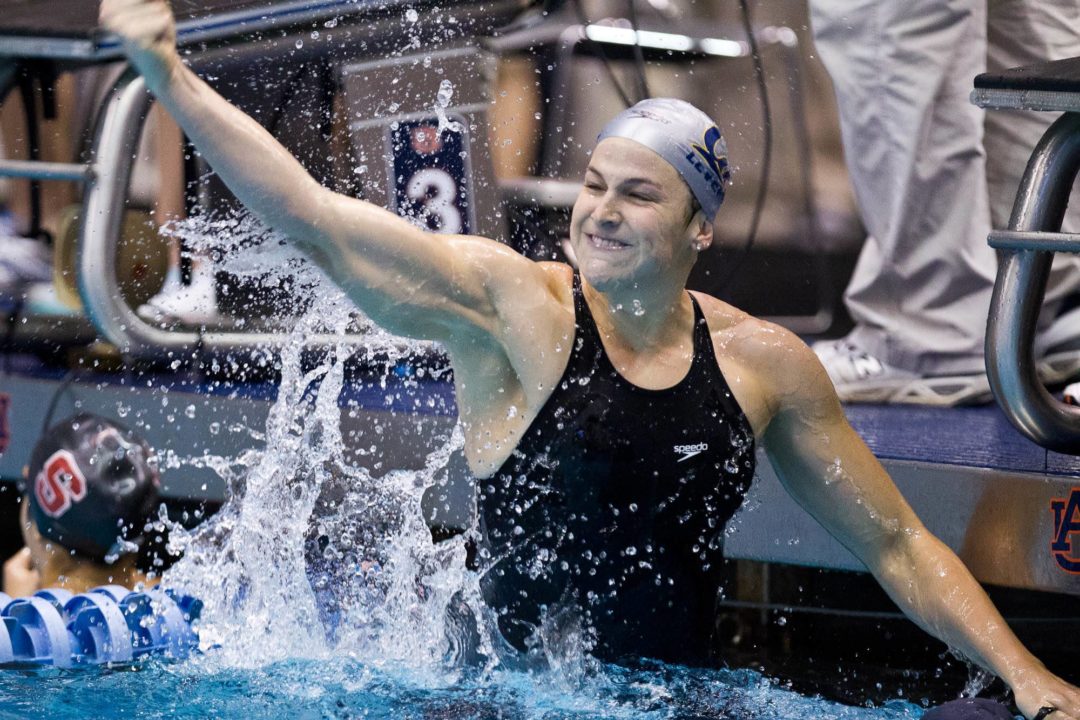 Caitlin Leverenz (above) and Matt Grevers will be the two USA Swimming National Team representatives that go to Maui, Hawaii for the Jr. Pan Pac Championships. Archive photo via Tim Binning/TheSwimPictures.com

After breaking the PSS record in the prelims, Michael Andrew will have his sights set on the American Record in the men’s 100 breaststroke tonight.

While National Team swimmers Caitlin Leverenz and Matt Grevers may have missed the 2016 U.S. Olympic Team, they will receive a consolation prize of a trip to Hawaii this summer as the National Team representatives to the Jr. Pan Pacs team.

In what has become a standard of American swimming, USA Swimming sends senior National Team representatives and veterans along with most international junior teams to mentor and help guide those squads.

Leverenz is a 2012 Olympian and Olympic bronze medalist in the 200 IM. At the 2016 U.S. Olympic Trials, after dropping her other events and putting all of her efforts into the IMs, Leverenz placed 3rd in the 200 IM final and 5th in the 400 IM final. In the former event, she was a mere .05 seconds behind the runner-up Melanie Margalis to just miss out on the 2nd spot at the Olympic Games.

This was originally offered to Tyler Clary but he couldn’t attend due to a racing event.

I think Greevers is a much better person for the job anyways. Leverenz is also a great Christian leader for the kids!

Great Christian and leader for kids? That’s quite an oxymoron.

It’s just an opinion.. You don’t have to agree or anything.

hsswimmer merely noted that she is a a good leader and a Christian. Nothing wrong or controversial about that. It’s encouraging for people who are on this site to know she is a Christian. No one is spouting off about religion. What’s more interesting are people’s responses. That says more about them then her.

Not entirely. You don’t have to agree with the belief system, but one could say that a high % of devote Christians practice a respectable and clean lifestyle and since she’s there to basically chaperone kids it’s relevant in that aspect. That doesn’t mean non-Christians or atheists couldn’t fill the role either. For example CheatinVlad would do a good job as long as he didn’t share with the kids the PED use and his love of vodka:)

How about just, “a great leader and inspiration for the kids.”

Hm. Can add Christians to “dopers” on the list of things SwimSwam commenters do not like. Interesting.

It is a little over the top to assume SwimSwam commenters are anti-Christian. Unless one knows the soul of another, it isn’t cool to make assumptions about one’s faith or belief. Just saying……

Great for Matt! I can totally see him in this kind of “elder” statesman role! Excellent choice!

Grevers is a great guy to have in USA Swimming to raise the next generation! I hope he can find pride and happiness in continuing to represent USA in light of just falling short of Rio, and an opportunity like this is great for him :]