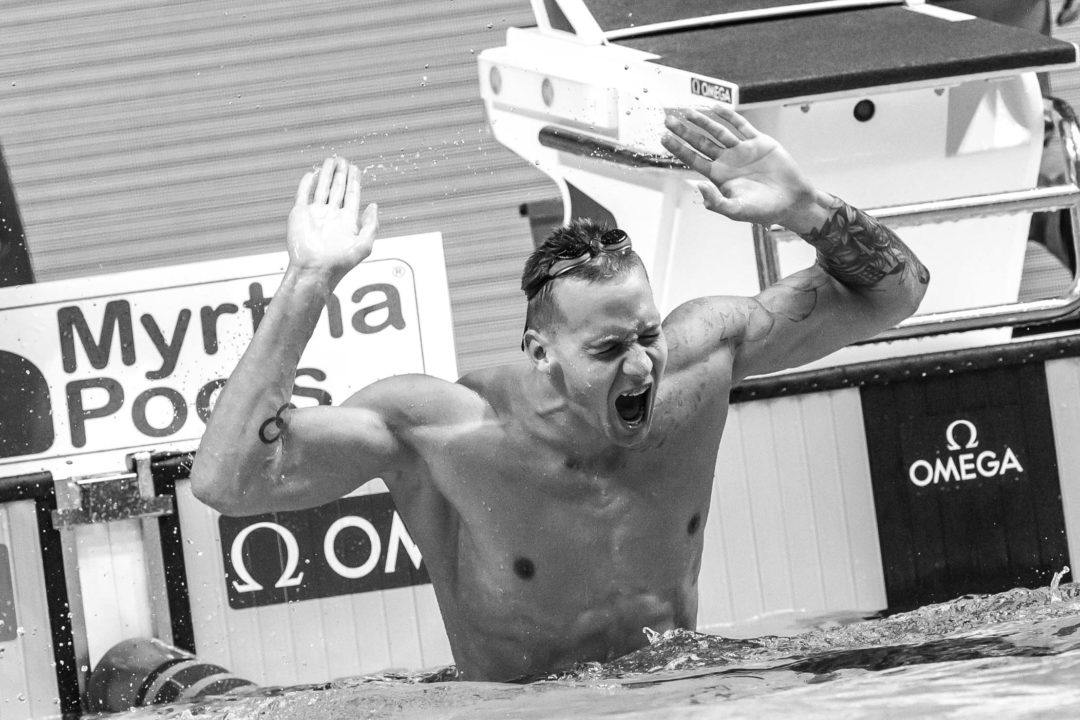 To no one’s surprise, Caeleb Dressel takes home Male Athlete of the Year at the 2017 Golden Goggle Awards.

In his acceptance speech, Dressel recognized World Championship team captains Nathan Adrian and Matt Grevers for their leadership in Budapest. He also mentioned “my only fear in the sport is plateauing, not with medals or times, but learning.” The award was presented by Natalie Coughlin and former Olympic gymnast Nastia Liukin.

However, this one was all Dressel, as he followed up a jaw-dropping performance at the NCAA Championships with a mind boggling seven gold medals at the World Championships.

At NCAAs, Dressel three-peated in the 50 freestyle and repeated in the 100, breaking the American and NCAA records in the latter. However, perhaps his most impressive swim at the meet was the 100 fly, where he dethroned two-time champion Joseph Schooling in a new American and NCAA record of 43.58. He also joined Vlad Morozov in the elusive sub-18 second club for a 50 free relay split, hitting marks of 17.99, 17.71 and 17.93.

Despite his incredible NCAAs, his World Championship performance was what won him this award. After his performance at both NCAAs and U.S. World Trials, everyone knew Dressel was gonna be good in Budapest, but he really blew everyone away.

He won seven golds – three individual – tying the GOAT Michael Phelps for the most gold medals ever won at a World Championships. Individually he won the 50 free, 100 free and 100 fly, and added relay golds in the 4×100 free and medley in both the men’s and mixed categories. He added American record marks in both sprint freestyle events, and claimed another in the 50 fly where he finished 4th. Both mixed relays also broke world records.

Despite not walking away with the win, Kalisz truly had an incredible year. After winning a close silver in the 400 IM in Rio, the final in Budapest really wasn’t close, as the 23-year-old lowered his PB to 4:05.90 to win by almost two-and-a-half seconds. Prior to that swim, he won the 200 IM over a stacked field in another personal best of 1:55.56. Before this year he had never competed in the event at a major international meet due to the longtime reign of Phelps and Ryan Lochte.

Along with his World Championship performance, Kalisz won the men’s Arena Pro Series title and added another NCAA title to his resume with an American record breaking performance in the 400 IM.

I’m not sure but I think Caeleb was only a three-peat in the 50 free at NCAAs last year. He didn’t A final his freshmen year in the 100 free.

Yeah, especially since Troy was going to “ruin him” as a sprinter. Funny how that worked out.

I agree – it’s kind of funny how some people think Troy is only a good coach for “distance” or middle distance swimmers. I used to swim for him (many years ago) and can say first hand he knows how to coach swimmers in each event.

His freshmen year he was coming off a six month break the summer before. he just wasn’t in the same form that he was in the following year

First of all, no brainer that he gest the award. Second, I don’t think his most impressive swim at NCAAs was the 100 fly. He got A LOT better in the 100 fly from then until Worlds, as Schooling can attest. I think his 40.0 100 free, coming so late in the meet as his 13th swim, was by far the most impressive.

What would he have gone if he could flip turn the 100 fly scyds ?

As an old fogey who had to abide by completely different rules for breaststroke and for backstroke turns, questions like this drive me crazy. You might as well ask, “How much faster would his backstroke be if he could swim on his stomach?”