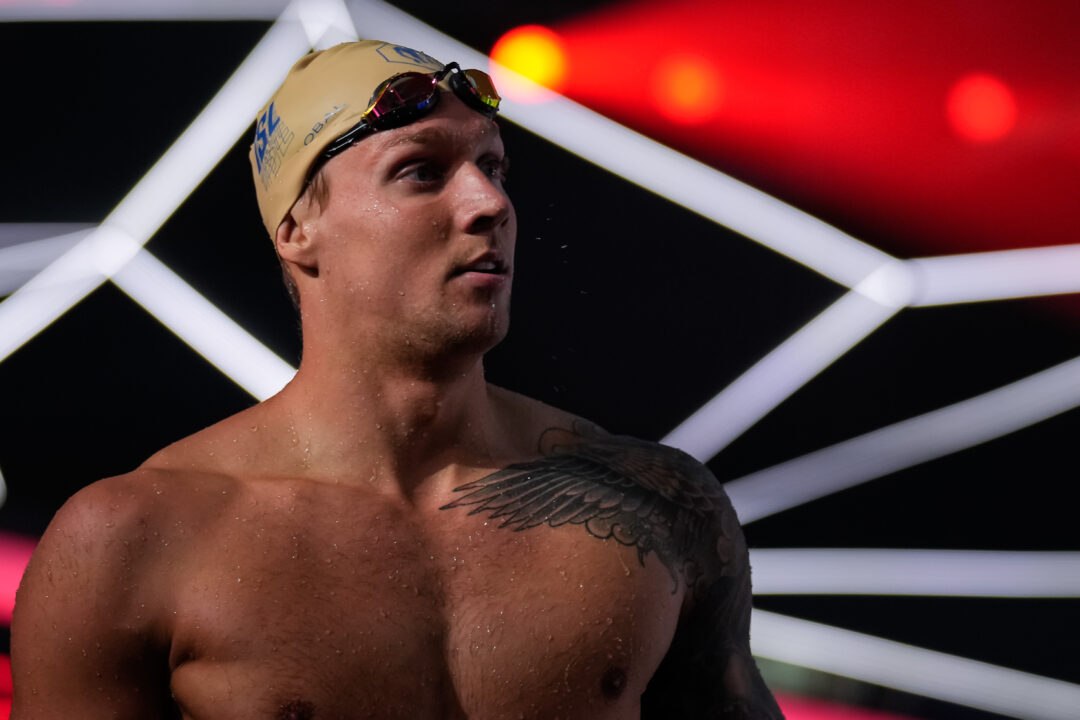 Dressel won't race for the Cali Condors this weekend, as he's not feeling 100 percent and will instead rest up for the final next week. Archive photo via Mike Lewis/Ola Vista Photography

The Cali Condors will be racing shorthanded in this weekend’s ISL playoff match, as the club is opting to rest superstar sprinter Caeleb Dressel.

Dressel has been under the weather since he arrived in Eindhoven last week, according to Cali Condor general manager Jason Lezak, and the team is choosing to rest him in order to have him at his best come the ISL Final in one week’s time.

“Caeleb came down with a cold when he arrived last week and we have decided to rest him for the finals for optimum performance,” Lezak told SwimSwam.

“Although he will be listed as a relay-only swimmer since we only have 14 on our roster, we don’t have intentions to use him at this time. He has also tested negative for Covid prior to departure and this week as well so we are confident he will be able to swim next week.”

While Dressel is a massive loss for the Condors, it doesn’t really impact their hopes of winning a second consecutive ISL championship. Cali has all but locked up a spot in next week’s final, and have proven they can perform well without last season’s MVP in the lineup, including earning a victory in the first playoff match over Energy Standard despite his absence.

What is far more crucial for the Condors is that Dressel gets back to top form, or at least close to it, as they have a tough test in front of them with Energy Standard and London Roar both looking phenomenal in the fifth playoff match that wrapped up on Friday.

Dressel swam well during the regular season, winning 10 individual events and one skins race, but he only raced in two and a half of the four matches and flew home from Naples early after reportedly not feeling well.

After missing the first playoff match in Eindhoven, the 25-year-old returned to competition for the first time in two months last weekend, but was clearly nowhere near his best. The Condors didn’t even enter him in the 100 free, 50 fly or 100 fly, and he only finished third in the men’s 50 free while picking up one individual win in the 100 IM.

The only thing that’s really left to be determined in the sixth playoff match this weekend is if the LA Current will join Cali, Energy Standard and London Roar in the league final, which looks to be a near-lock even without Dressel in the lineup. The Toronto Titans would need to pull off a gargantuan upset over the Condors to spoil LA’s party and make the final.

Just be honest, he ate too much turkey and mashed potatoes.

I feel like there are a ton of swimmers skipping the meets and guessing its because they are (still?) not being paid.

Mr. Dressel, while you are resting shut off your phone and enjoy the quiet. We all need to sometimes.

I assume this is satire. Even the biggest anti-Dresseler couldn’t actually believe this.

He’s partly right. He’s stressing less intensity in his preparation — said the entire Olympics was too much self-sacrifice, wants more family time, etc. Now switching back to sprint coach. And getting older. So I doubt we see the same Dressel for a few years, if ever. People didn’t realize how significant Troy was in Lochte’s peak performance until Lochte moved to Marsh. We’ll see how Dressel does without Troy’s overall direction.

Imo, Lochte’s problem wasn’t that he moved to Marsh, it was that he was less dedicated than before + the addition of a crippling knee injury in 2013-2014, and a groin injury during the Olympics.

Dressel’s sprint coach is the same one who Dressel trained under in college, so it doesn’t make sense that this would be a downgrade.
We’ll see what happens in this year and the next.

Caeleb, while you are resting, how about picking up your yt channel again

As a true pro, Caeleb will try his best next weekend. If it weren’t for the camaraderie with his teammates, he probably wouldn’t have gone to The Netherlands at all. He’s had a phenomenal 2021, and I think his focus is on gold medals and long course world records in Japan in May 2022.

Dude, it’s fine that he’s sick. You don’t need to make excuses for him. He’s sick. Everyone understands that.

Even then, he probably won’t be quite near his best this SCM season. He has taken the time to enjoy the fruits of his labor, and Troy has said he hasn’t done doubles since Tokyo. But, like MP in 2009 (who didn’t touch the water for a few months after Beijing, and was hitting the reef more than the pool), he doesn’t need a huge block of training to get back into form, as the training base of the past quad is still there for him.

He’s got a frickin’ cold, ffs. He doesn’t have malaria. I would hope a “true pro” could buck up for a swim for money with a cold.

Someone tell Caeleb not to go near Shymanovich. It would be just… awful… if he were to get sick right before the final and be unable to butterfly his way to a breaststroke record.

Cute. You know, this is aged, now, a few years. However:

Shymanovich could probably do a 48 in the 100 SCY breast, and Dressel gets more average with each additional yard. Hence his 100 LCM breast times.

You really have quite a negative attitude towards Dressel. What’s the problem? It’s not purely objective analysis of the dynamics of the facts at hand. Are you having problems with your digestion? I recommend Metamucil, you being an old guy like me and such. LOL….

He isn’t wrong in this case, though. When they put Dressel in BR races during ISL, he couldn’t hang with the BR specialists, including Shymanovich. Dressel is a great SCY breaststroker–he’s the 2nd fastest all-time in the 100–but his strengths in that race are the start and pullouts, which aren’t as much as a game-changer in SCM. I’m sure if he put some decent focus in the 100 BR SCM, he could be somewhere in the 56 range and challenge Fink’s AR, but that’s still well off the pace of Shymanovich.

I really wish I could see Shymanovich do a SCY breast. We gotta get him into the States for a weekend! Same with Peaty!

Had a feeling this would happen. Smart I guess.