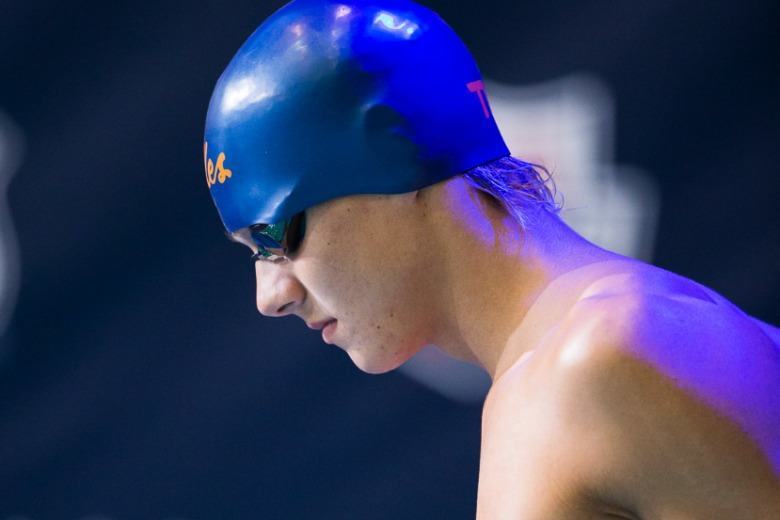 The Bolles School Sharks' Caeleb Dressel broke his own 15-16 NAG record in the prelims of the 50 meter freestyle at the Junior National Championships in Irvine, CA. He continues to make his case as one of the most exciting, young sprinters to look out for in years to come. (Photo Credit: Tim Binning, the swim pictures)

Just one day after Bolles School Sharks’ rising star Caeleb Dressel shattered Ian Crocker’s 200 meter freestyle record by going a 1:48.64, he knocked another sprint record out of the books with a blistering 22.39 this morning in the 50 meter freestyle prelims at the Junior National Championships in Irvine, CA.  By doing so, Dressel bettered his own 22.59 standard that had been established at the 2013 TYR BSS Summer Classic back in June.

Dressel’s time is impressive not only from an American perspective, but also when compared with the times that some of the world’s best sprinters today posted when they were just 16 years old.  For example, if we take the top 2 finishers from the 2013 FINA World Championships in the 50 meter freestyle, and take a look at their best times when they were 16, we find that Dressel has already surpassed them both.

Dressel still has an opportunity to improve on his swim tonight in finals.  He will be pushed by fellow teammate and future USC Trojan, Santo Condorelli (22.88), as well as future Michigan Wolverine, Paul Powers (22.99), from Splash Aquatic Club in Georgia.  Also, Caeleb will also surely have his sights on the 22.13 meet record that Morozov established in 2010 (coincidentally also in Irvine).

Very impressive versatility by this young man, hopefully he can continue this momentum into his adult swimming career.

Truly a great time! He will be a senior this fall, right? What are the chances he will join his teammate Condorelli at USC a year from now? If not USC, one of the PAC 12 teams needs to get him!

At this rate what are the chances he just goes pro?!

I don’t see any way he goes pro. He comes from a wonderful family that is very grounded.

Does having a wonderful family and being well grounded preclude you from going pro and foregoing your college eligibility? Missy Franklin reportedly comes from a great family and loved being a part of her HS team but that wont stop her from going pro after her So year at Cal. Dressel will be 19 in Rio. The 2 years before the Olympics are the biggest earning years for Olympic athletes. If Dressel continues to progress (and I think he will) there is a very good chance that he goes pro. To me he still looks like a boy who has tremendous strength gains to make. He seems like a wonderful kid and seems to love his team very much but… Read more »

SO PROUD OF YOU CAELEB! THANK YOU TO EVERYONE FOR ALL THE SUPPORT YOU HAVE SHOWN HIM. I HAVE THE BEST SWIM FAMILY EVER. GO BOLLES AND GO CHS!