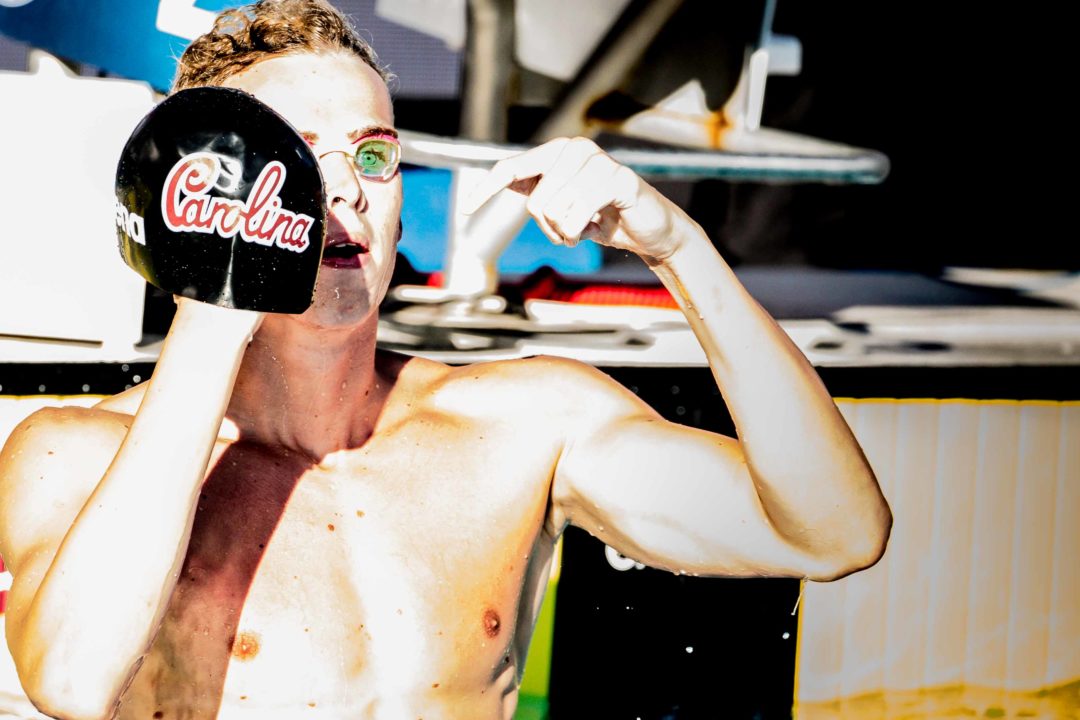 A handful of Gamecock standouts highlighted the meet with wins. Lewis Burras earned a sprint sweep for the men. Both the men and women beat Queens and UNCW. Current photo via Jack Spitser/Spitser Photography

The South Carolina men and women closed out their regular season on Saturday with a pair of wins each, defeating UNC Wilmington and Queens. A handful of Gamecock standouts highlighted the meet with wins. Lewis Burras earned a sprint sweep for the men.

Also among the Gamecock notables were Lionel Khoo, Emma Alexander, and Christina Lappin. In the 100 free, Lappin was stroke-for-stroke with Queens’ Polina Lapshina, getting her hand to the wall first in a 50.47 to 50.51 victory. Khoo won the 100 breast by a second in 55.12, while Alexander was the 200 back champ in 2:02.74.

COLUMBIA, S.C.— South Carolina swimming and diving put in a strong performance Friday on the first day of the S.C. College Invitational. Matched up against UNC Wilmington and Queens University, the Gamecocks won 13 of the 20 events to take a commanding leading through day one.

Scores Through Day One:
Men

Up Next for the Gamecocks
Day two of the S.C. College Invitational will begin Saturday at 10 a.m. following the senior recognition ceremony at 9:40.

COLUMBIA, S.C– South Carolina swimming and diving wrapped up its regular season Sunday, finishing the S.C. College Invitational. The Gamecocks emerged 4-0 after two days of strong swimming with the men and the women both defeating Queens and UNC Wilmington.

QUOATABLE HEAD COACH MCGEE MOODY
“I was really interested to see how we would respond this morning after racing last night, and we took care of ourselves pretty well. We swam kind of an off lineup; we got so people into different events especially on the women’s side. We fought – Queens and UNCW are two good programs that gave us races all the way to the end. Our kids stepped up big. Now the focus shifts 100 percent to the SEC Championships.”

QUOATBLE HEAD DIVING COACH TODD SHERRIT
“I thought we did really well. Yu Qian was outstanding on the three-meter today; she really showed up at the right time, and I think we got some breakthroughs there. Mathilda (Roxne) had a solid meet. The guys did well. Alex Claus had a solid meet, and Grant came off being sick all week long; so I was really happy with how he did. Overall, I’m happy; we’re right where we should be going into SECs.”

Up Next for the Gamecocks
The Gamecocks will lock in for the next two weeks before heading to Auburn for the 2020 SEC Championships starting on Feb. 18.