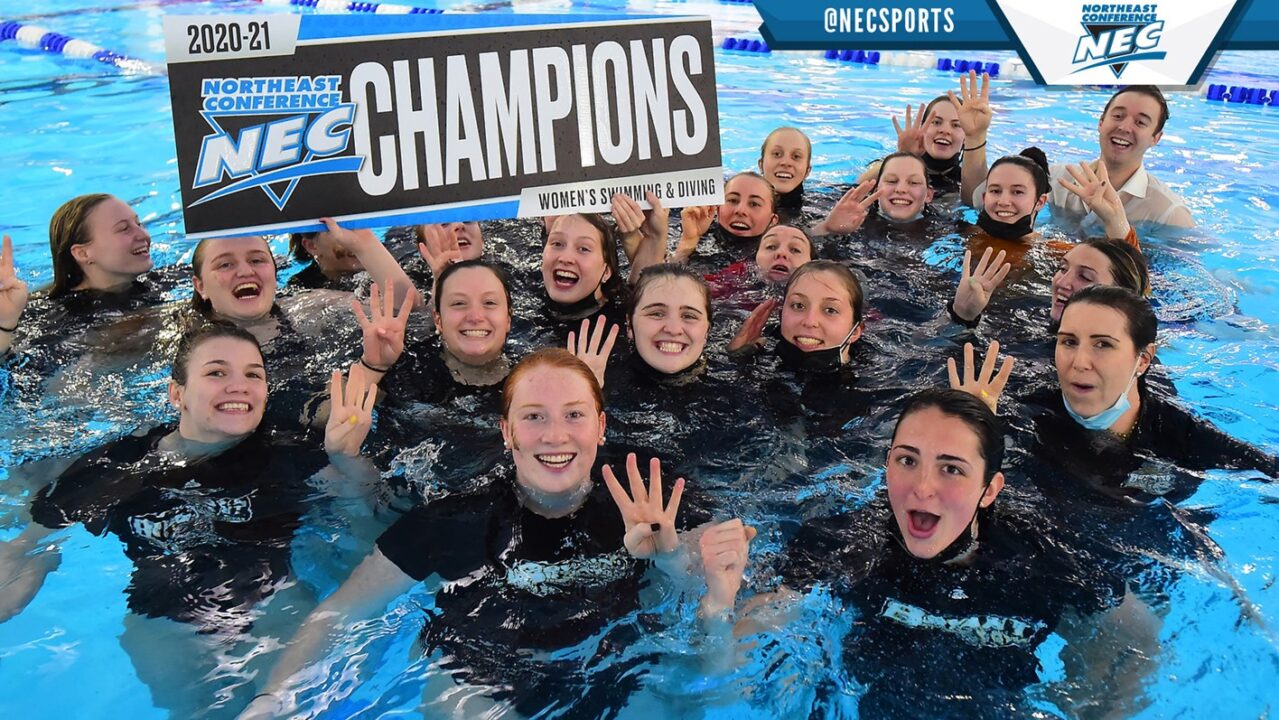 Bryant got the job done, holding the team lead from day 1, and maintaining it throughout the meet. After winning this year’s NEC team title, Bryant has become just the 3rd school in conference history to 4 consecutive titles. Bryant continued to use their superior depth to outscore the competition, racking up an impressive 14 top-8 finishes on the final day.

Central Connecticut State’s Jeannette King finished off her undefeated meet, taking the 50 free with a 50.20. King got her hand on the wall over a second ahead of runner-up Alexa Rivera (Bryant), who finished in 51.25. Rivera also finished 2nd behind King in the 50 free earlier in the meet. King also won the 100 back on day 2 of the meet. CCSU picked up another win on the final day, with Alex Lindgren clocking a 2:17.04 to claim the 200 breast title. She used a strong back half to pull away from the field, landing her hands on the wall a full second ahead of anyone else in the field.

LIU picked up another win on the meet as Ella Johnson took the 200 fly with a 2:01.12. Johnson posted a massive victory, touching nearly 4 seconds ahead of the 2nd place. She was in control of the race from the very beginning, splitting 26.56 on the first 50, which was 1.46 seconds faster than anyone else in the field.

The Bryant men’s team left little room for doubt heading into the final day, and they ultimately got the task done. Bryant has won the first men’s NEC title ever, and did so in decisive fashion, outscoring runner-up LIU by 167 points.

Matthew Mays finished off his electric meet for Bryant with a massive victory in the 200 back. Mays swam a 1:44.06, touching ahead of the field by over 5 seconds, marking a huge margin of victory. He matched his splits on the last 2 50s, splitting 26.91 on both.

Another Bryant senior, Fu Kang Wong, took the 200 breast with a 1:58.98. Wong was the only swimmer in the field to crack 2:00. He built a big lead early on in the race, and managed to hold on through the finish.

Name another combined program female Div. 1 Head Coach to win a conference title for Men AND Women in the same year…I’ll wait