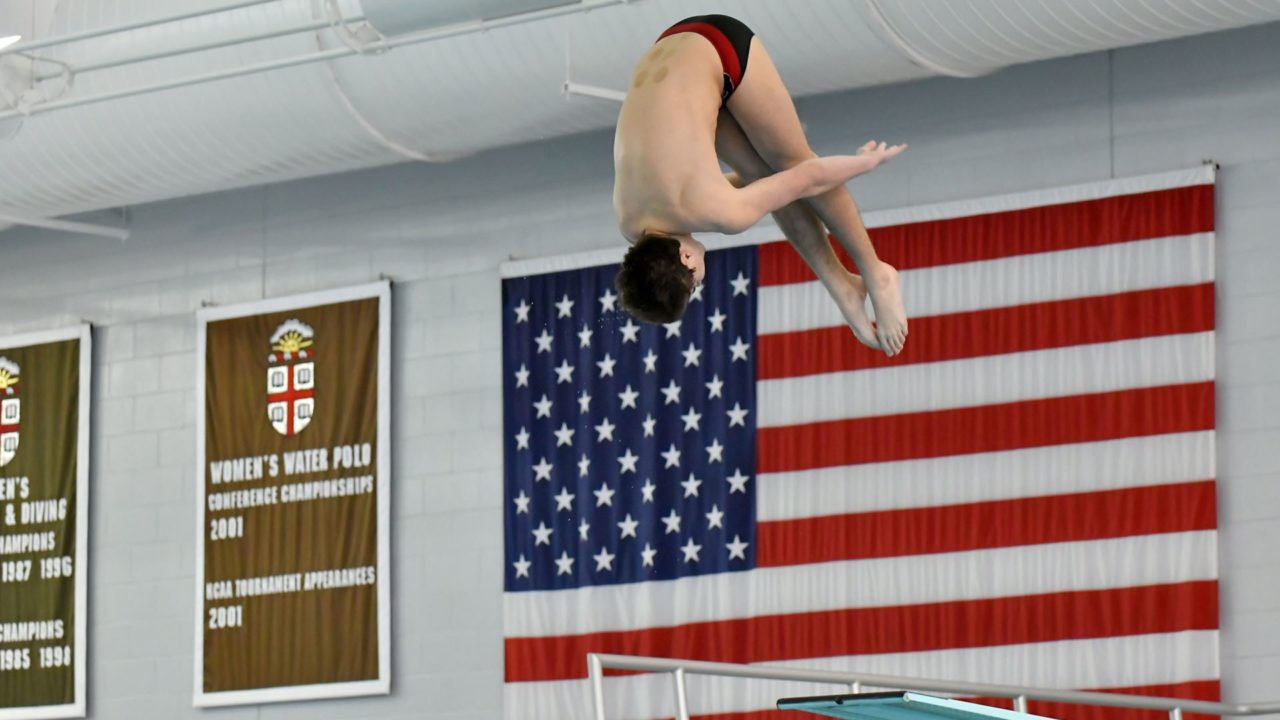 PROVIDENCE, R.I. – The Brown men’s swimming & diving team defeated Columbia, 186-114, on Saturday at the Katherine Moran Coleman Aquatics Center. The Bears won a total of 12 events with sophomore Trevor Labuda (Los Altos, Calif.) breaking the program record in the 3M, a mark that stood since 1989.

“This was a special win for our program, we haven’t beaten Columbia since 2010,” said head coach Kevin Norman. “As expected, the meet started with an extremely fast and competitive 200 Medley Relay and we were able to hold off a very talented Columbia relay. The team looked great this morning warming up, very focused, and we had a feeling this would be a big day for us, but that relay definitely set the tone.”

“We were also tremendous on the boards this afternoon,” said Norman. “Will NcNelis won the 1 Meter and qualified for NCAA Zones while Trevor Labuda won the 3 meter breaking a 31 year-old school record.”

Cline, Sung, Sullivan and Smilenov capped off the strong day by winning the 400 freestyle in 2:58.34.

“Sending our senior class out with such a big win in their last home meet meant a lot to the team, and to see an all-senior 400 freestyle relay of Cody Cline, Joon Sung, Coley Sullivan and Alex Smilenov put a stamp on the day with a win was perfect,” said Norman.

PROVIDENCE, R.I. – The Brown women’s swimming & diving team was defeated by Columbia, 175-125, on Saturday at the Katherine Moran Coleman Aquatics Center. Senior Sarah Welch (Beverly, Mass.) led the Bears with victories in both the 100 and 200 backstroke while sophomore Audrey Lukawski (San Francisco, Calif.) recorded a win in the 200 breaststroke. Junior Julia Feord (Royal Oak, Mich.) led the divers with a first-place finish in the 1M.

“Kudos are due to our competitors who came in sharp and ready to go,” said head coach Kate Kovenock. “I am proud of how this team made their way through this afternoon’s senior meet. Racing when you are tired and with the added emotion that we have for our graduating senior class takes a lot. They are a special group and have been instrumental in the improvement of our program in the last four years. We’re ready to take on this next portion of training as we move into championship season in the coming weeks.”

Welch recorded the first victory for the Bears on the afternoon, swimming to a time of 56.55 in the 100 backstroke while Matsushima claimed third (56.85). Welch later won the 200 backstroke, doing so in 2:01.42 while sophomore Victoria Gong (Laguna Niguel, Calif.) claimed fourth (2:04.39).

Seaman, Center, Gilchrist and Cross capped off the meet by winning the 400 freestyle relay in 3:26.34.

“Brown has a great facility to swim fast, and the Columbia women took advantage of that today,” said Lions head coach Diana Caskey. “It was a great opportunity for the upcoming Ivy Championships here at Brown in February, and it was exciting to pull off such a decisive win in our first away dual meet as well.”

Setting the tone early, the Lions posted a 1-2 finish in the opening 200-yard medley relay with the squad of Julia Samson, Helen Wojdylo, Emily Wang and Audrey Richter combining for a winning time of 1:42.82.

The winning continued for the blue and white, earning victories in the first two individual events as Olivia Jubin took top honors in the 1,000 freestyle (10:10.13) and Jessica He took the triumph in the 200 free (1:51.90).

The Bears notched their first win of the day in the 100 backstroke, but it wasn’t long before Columbia got things moving back in the right direction with a 1-3-4-5 finish the 100 breaststroke. Wojdylo (1:03.86) led the way, while sophomore Yani Le was third in 1:05.22.

Sophomore diver Briget Rosendahl led the way on the 3-meter springboard, registering a winning score of 261.75. First-year Livy Poulin was third in the event at 253.80, while sophomore Michelle Lee took fourth at 234.60. Rosendahl was also the Lions’ top finisher on 1-meter with a silver-worthy 266.93.

“Really strong meet for Briget in both events,” said Columbia diving coach Scott Donie. “With Livy and Michelle stepping up on 3-meter and 1-meter, it made for a great day for the women divers.”

The Lions will continue their two-meet road stretch next Saturday, Jan. 25, traveling to face the Princeton Tigers. The meet is set to begin at noon ET.

PROVIDENCE, R.I. — Senior Nian-Guo Liu led the Lions with a trio of individual wins, but it wasn’t enough as Columbia men’s swimming and diving dropped a 186-114 decision to Brown on Saturday afternoon at the Katherine Moran Coleman Aquatics Center.

“Tough day, but it’s not something that I didn’t anticipate,” said head coach Jim Bolster. “I didn’t necessarily think we were going to lose, but I knew that Brown was going to give us a lot of trouble and that we were really going to have to be on and we weren’t and they were. It was their senior day, and their seniors had never beaten us and I think they were pretty fired up to do that.

“There were some close races early on that didn’t go our way and it just steam rolled from there. I wasn’t disappointed with the way we swam, but we just didn’t have enough depth. Brown is a very good team, they were really ready for us today. We don’t have a meet next week so I think we’ll have a chance to recover and gear up for the start of the second semester. There’s always a time in the season where there’s a low point, and it’s how you respond that really matters.”

The opening 200-yard medley relay was extremely tight with the Bears earning a narrow victory at 1:28.91 ahead of Columbia’s 1:28.99, and Brown would open the meet with back-to-back wins before Liu won the 200-yard freestyle with a time of 1:35.88.

The 100 backstroke would prove to be another extremely tight race, but senior Cole Stevens (49.30) would be edged out by Brown Joon Sung (49.10) for the win.

The next race saw sophomore Jonas Kistorp go 49.85 in the 100 butterfly to finish second in the event, and Liu wrapped up the inidivdual events with a winning 1:48.92 in the 200 IM.

Columbia will have nearly two weeks until its next dual, traveling to face Navy on Friday, Jan. 31 at 2 p.m.