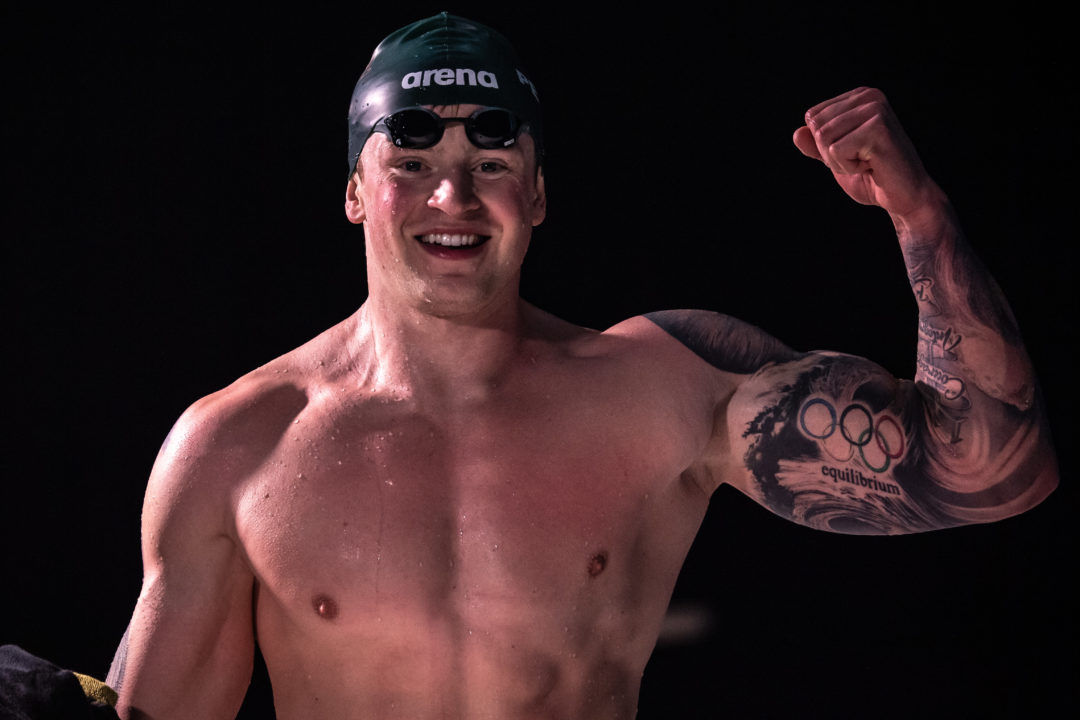 Informally known since December's release of British Swimming's revised selection policy, the first 4 members of the Olympic squad have been made official. Archive photo via Mike Lewis/Ola Vista Photography

Last month we conveyed British Swimming‘s revised Olympic selection policy, which spelled out the two-phase qualification approach. This is due to the delay in the Olympic Games, as well as disruption in training and competitions as a result of the coronavirus pandemic.

British Swimming has now formally and officially named these 4 men to the squad, with the remaining team members set to obtain selection at the primary selection meet of the British Championships set for April 13th-18th. As we reported, swimmers may also strive for qualification at the European Championships (May 17th-23rd), Glasgow International Swim Meet (May 28th-30th) Mare Nostrum – Canet (June 1st-2nd) and Mare Nostrum – Barcelona (June 5th-6th).

Of the official naming of Peaty, Wilby, Greenbank and Scott, Team GB Chef de Mission for Tokyo 2020, Mark England, said, “We are thrilled to confirm that Adam, Duncan, James and Luke have been selected to Team GB for the Tokyo Olympics and would like to congratulate them on this outstanding achievement. We hope that this confirmation provides clarity and focus for this hugely talented group of swimmers as they continue their preparation for the Olympic Games.

“The mix of Olympic debutants and Olympic medallists within this group is extremely exciting and we know that their performances will uplift and inspire the nation this summer.”

Chris Spice, British Swimming National Performance Director and Team GB Swimming Team Leader, added, “I give my warmest congratulations to Adam, James, Duncan and Luke, who have all been selected to the Tokyo Olympic team as per our policy published a few weeks ago. These gentlemen are all outstanding athletes and great ambassadors for our sport. They were not only individual medallists from our most recent World Championships in Gwangju, but all returned home with relay gold medals as well. Their selections are richly deserved, and I know how the four of them will keep their heads down and work even harder now to be in the best possible shape for Tokyo.

“I am also fully aware that some of our Olympic hopeful’s training environments are compromised right now and I feel desperately sorry about that. We continue to work hard to ensure our current elite athlete group can train, but our thoughts are also with those who cannot access water at the moment – we are hoping that with the extension of the Olympic qualifying window we can, at least in part, alleviate some of their concerns.”

The swimmers themselves also responded to the official appointment.

“I’m very happy to make the Olympic team – it’s always a huge pride and honour to represent my country in what I do best. Hopefully over the next few months we can come together even more as a country, back the full Olympic team, and we can come back from Tokyo with a very successful performance behind us.

“There is a lot of work to do from now until then, but I’m very hopeful the Olympics will go ahead and it’ll see continued success for Team GB.”

“It’s a real honour to be selected for my second Olympic Games. I loved every second of Rio; the way that the team swam but then also being a part of the bigger team and being part of Team GB, it was a great experience and one that I really wanted to have again. So I’m delighted to be selected, especially after the last year or so that we’ve had, with so many unknowns – it’s great to get this. I’m really excited and really looking forward to the year ahead.”

“To make the Olympic team means absolutely everything to me. It’s the pinnacle of our sport, and it’s something I’ve wanted since I started swimming at nine years old. I can’t wait to get out there and experience it first-hand.

“Obviously the last year or so has been quite different with regards to not being able to train or compete as much, so I think that’s something a lot of athletes are missing in their lives. So to have that opportunity to go out to the Olympics and race on the biggest stage of them all is absolutely amazing, and like I say, I just can’t wait to get out there.”

“Pre-selection is amazing. It’s really nice to be put on the team and have that certainty, with all the uncertainty that’s going on in the world at the moment. It’s really nice to be among that list of select athletes picked, but as I’m sure the others will be saying, it doesn’t mean the work can stop now – all it means is we’ve got ourselves on the plane, the job still has to be done.

“It’s always something I have aspired to and it’s always going to hold a special place in my heart being one of the select few who have been picked to represent Great Britain at the modern Olympic Games.”

I’m already anticipating a full team of discretionary picks. Champs look fairly unlikely to go ahead as we sit here with almost 2000 people dying of covid every day.

Does that mean no one else can qualify for the 100 breast?

Depends if Wilby has been picked for 100 or 200. If it does mean the 100 is full then I think this is unfair. There should be a chance at trials for someone who is in form at the right moment.

I believe it is the 100m that Wilby has been selected for, and would therefore completely agree that it is unfair (no disrespect to Wilby he a great swimmer and I believe he could medal at the Olympics). However, we are basically three months away from the Olympic trials and when they race no one at the trials will have the ability to make the Olympic team in the 100m breaststroke because of the results of a race that took place approximately 21 months earlier. Ross Murdoch has gone 59.0 and surely he should have been given the opportunity, together with everyone else, to qualify for the Olympic team in the 100m breaststroke at the Olympic trials.

I think it said in the selection policy that they were selected to the team, but not necessarily to a specific event. Obviously it makes sense for them to be selected in the event they won a medal in, but with Wilby, I think he would be considered better at 200 than 100 breast and so depending on what happens at trials, there is scope for him to be entered in the 200 and someone else to do the 100

I think the reality is that Peaty and Wilby will swim the 100. In 2016 and the original 2020 selection policy if you won at trials and swam a really fast specified time you made the team. Now there is no guarantee (some may believe this has something to do with the fact they have two top 100 breaststrokers already selected) – you win at trials and hit the target time and you MAY be selected. If someone swims an incredibly fast 100 they may get selected but winning at even a low 58 probably won’t be sufficient, given Wilby has gone 58.4 and is already in the team. As in this scenario they will probably swim Wilby, as there… Read more »

To be fair to Wilby, his starts and turns are actually worse than Peaty’s so it could just have been that the short pool especially wasn’t for him. He’ll be fine