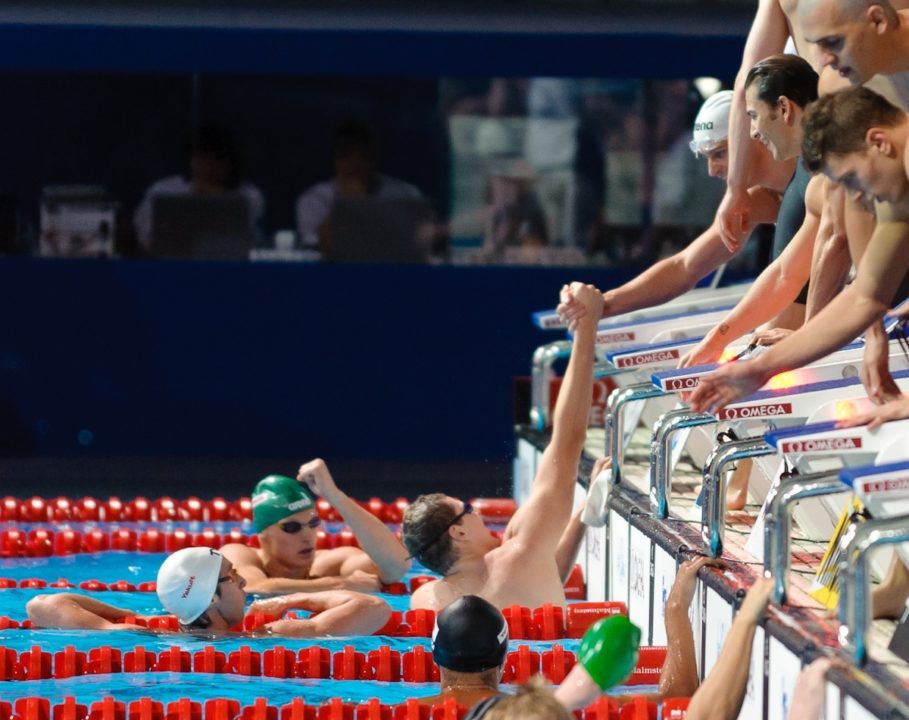 The French 4x100m medley relay team celebrating a good prelim swim at the 2013 World Championships. They will be going head-to-head with Britain at this year's European Championships for gold. Archive photo via Victor Puig

The European Championships are coming up and with it the relay events will be a true showing of a country’s depth in the pool.

After their performance at the Commonwealth Games, the british team has to be the favorite’s heading into this event. With the likes of Chris Walker-Hebborn on the backstroke, Adam Peaty on the breaststroke, Adam Barrett on the fly, and Adam Brown on the freestyle they were able to defeat the Australians at the commonwealth games to win gold.

The English team put together a time of 3:31.51 which should be very competitive for gold at the European championships as well. Granted much of that time is due to the breaststroke split thrown down by Adam Peaty of 58.59. In the case that Peaty doesn’t go as fast, which is a possibility considering his lack of experience on an international scene, they still have room for improvement as Adam Brown has shown that he can be faster than a 48.52 split on the freestyle which he was in the relay at Commonwealths.

France is a team that could very well rival the British considering that they are the defending World Champions in the event from the 2013 worlds. In the backstroke they may have lost their big advantage with Camille Lacourt missing the meet. Lacourt holds the European record in this event and is the second fastest performer ever with the 52.11 he set back in 2010.

France then has multiple options on the backstroke leg. If they use Jeremy Stravius here, they should still start with an advantage. If not, the spot will go to Benjamin Stasulius, which would leave them near, but not at, the lead.

Chris Walker- Hebborn should be the best of the rest as he was a 53.12 to win the gold medal at the Commonwealth Games.

Heading over to the breaststroke the British should take the lead with Adam Peaty. The French will most likely use Giacomo Perez d’Ortona as their breaststroke swimmer who won’t be able to keep up with Peaty if he can swim like he did at the Commonwealth Games.

Next is the fly, and with the fly the French and British have swimmers that will both post relatively similar times if both are properly rested. In the 2013 Worlds team, the French used Jeremy Stravius who was a 51.33, not that far off the mark that Adam Barrett swam at Commonwealths which was a 51.02. If the French use Stravius on their leadoff leg, then the spot falls to the young Mehdy Metella, who has a lifetime best of 52.48 and has looked as good as he ever has in-season in 2014. The British might extend their lead by a little, but they’ll need to contend with the French on the freestyle leg.

There’s no doubt that France has some of the fastest 100m freestylers in the world, and that will be a huge problem for the British as their biggest hole is that freestyle leg. The British will have to rely on Adam Brown who only split a 48.51 on the freestyle leg at Commonwealths. With Fabien Gilot most likely anchoring for the French, you can bet that they’re going to make up some ground on the British.

The French have many options to pick from however for the freestyle leg, and that consists of Mehdy Metella, Florent Manaudou, and even Yannick Agnel. There’s a large possibility that it could be Manaudou this year, but with no set decision we’ll go with Gilot who anchored last year.

Any of the French guys can throw down a 47-mid freestyle anchor split which means the British are going to need to be over a second ahead of them going into the freestyle leg. It’s all going to come down to that breaststroke leg where if Adam Peaty is on top of his game and can throw down another 58.59 they could very well do it. If Adam Barrett can make up a little bit of room for Brown by beating Stravius on the fly leg, they could be in a position to hold of the French anchorman and win the gold.

I think if the British swim exactly like they did at Commonwealths they’ll win the gold medal. After all, they matched the winning time from the French team at last year’s World Championships, and the French will most likely be a bit slower. If the British can match that time or be in the 3:31 range, they’ll win gold. If not, a charging Frenchman will out-touch Brown at the finish.

Russia should be good for the bronze medal. In Barcelona, they threw Vlad Morozov onto the backstroke leg for lack of a better backstroker, but this year they have Nikita Ulyanov who’s been a 54.08 at Russian trials. He will most likely take the place of Morozov on the backstroke, allowing Morozov to swim the freestyle leg which will speed up their time dramatically.

Although their backstroke swimmer might be slower than the likes of France or the British team, they’ve got steady breaststroke and fly legs to back him up heading into the freestyle leg which Morozov is one of the best in the world at. Andrei Nikolayev was a 1:00.41 at Russian trials in the 100m breaststroke which currently ranks him 18th in the world. He should be able to throw down a decent split that will keep them in the race. Although he’s no likes for a swimmer like Adam Peaty, he should be able to prevent the gap from widening too much.

The Russians have the best flyer in the field as Evgeny Korotyshkin will likely swim the fly leg of the relay. He earned himself the silver medal in London tying with Chad Le Clos of South Africa. He’s been a 52.09 this year, but his spot isn’t guaranteed on the relay as two other Russians have been faster this year in the 100 fly.

Nikita Konovalov sits eighth in the world with a 51.83 from Russian trials, and Vyacheslav Prudnikov sits in the fifth spot with a 51.60 from trials. It’s likely that Korotyshkin will get the spot purely due to experience, but there is a chance of course that the Russians could give it to one of the other two capable swimmers. Either way, the Russians are going to be flying home in the back-half of this race. The first two legs will be their downfall, but if Ulyanov can stay with Chris Walker-Hebborn and the French leadoff they should have a chance of making this race a lot closer than expected.

Germany should be a good bet for fourth as they’ve got a great breaststroker in the likes of Hendrik Feldwehr. There’s a very good chance that Seffan Deibler will be swimming the fly leg instead of the freestyle leg that he usually swims as the German team has entered him as the only male in the 100m fly. With Deibler swimming the fly, Paul Biedermann will most likely take the freestyle leg leaving the backstroke leg to Jan-Philip Glania as he’s the only man entered in the 100m backstroke.

The four are all solid swimmers, but with no swimmer absolutely dominant on the world stage in their respective event, it is unlikely that the Germans will medal. A fourth place finish is most likely at this year’s European Championships.

The Italians and Hungarians have been swimming well and were the only other teams to make finals in this event at last year’s World Championships so they’ll be the likely picks for the fifth and sixth spots.

Lacourt won’t be competing for France at the Euros due to injury.

Perhaps swimswam should read their own articles 🙂

that was the second fastest time ever on 100 back , behind the 51.94 of Aaron Piersol WR , still standing alive !

Yeah, and Camille Lacourt had the 3rd fastest 100 backstroke.

If Stravius is at his best, France has a good chance to win that relay. I wonder if the British will be able to swim as fast as at CG. But it will be close with Russia also in the battle.
GPD can swim a 59 high split on breaststroke.
Mehdy Metella can swim a 51.50 split on butterfly.
And Manaudou or Gilot will be fast on freestyle.
But there’s still a concern about Stravius with his back problems.