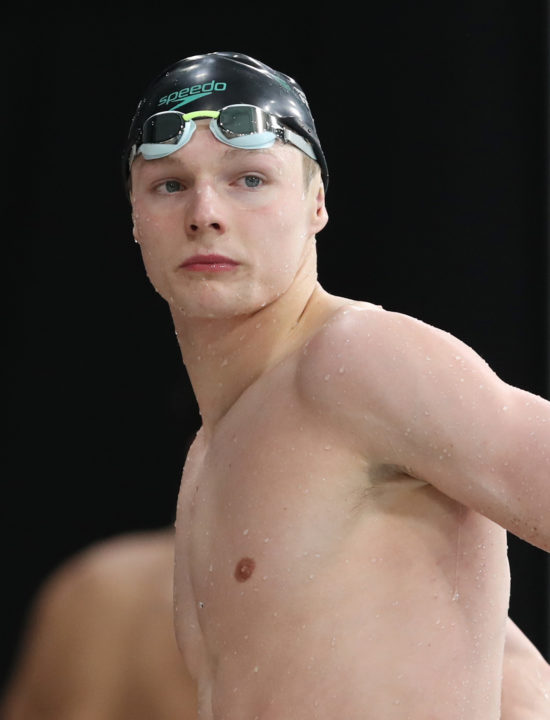 Duncan Scott is one of 16 British athletes in the middle of a 3 week altitude camp in Flagstaff, Arizona ahead of British Championships in April. Archive photo via Ian MacNicol

A team of sixteen British athletes is currently entering their final week in Flagstaff, Arizona for what has been a 3 week altitude camp. The athletes, who are all 200m and above specialists, have been putting in some hard yards over the past couple of weeks to build up a strong base and kick start the Olympic year. They are training at the Hypo2 High Performance Centre, a facility which British Swimming uses frequently for altitude training camps such as this one.

The closest we get to sunny blue waters up here, but that’s always just a bonus anyway

For 24-year-old O’Connor it’s her 9th year in Arizona and if she qualifies for Tokyo, will be her third Olympic Games. Just after the London Games she was diagnosed with colitis and in 2018 suffered a bout of serious illness because of the disease.

While speaking to the BBC last year, O’Connor expressed how she “genuinely wasn’t sure if [she] was going to be able to swim any more”. However, after returning to full health last April she managed to secure her place for the World Championships in Gwangju and get back on track ahead of the Olympic year.

Almost exactly 6 years ago I was diagnosed with Ulcerative Colitis. This week it’s Crohns and Colitis Awareness Week. 💟 For those that haven’t heard of it, Crohn’s and Colitis are diseases of the gut and they affect around 300,000 people in the UK. Stigma and misunderstanding around the conditions means thousands are suffering in silence. Symptoms can be debilitating and sometimes invisible, but a lot is being done to find a cure. There are days I find really hard, especially when I was 16 and it was all very new, but I have been helped through the tough days by an amazing support system. At first I was embarrassed to talk about it and be honest about my struggles, but in doing so I felt so much better and able to deal with it. I have met so many incredible people in the Crohns and Colitis community who have inspired me with their stories and their strength and hopefully by posting on here, I’ll in some way encourage other people with the same condition to feel that they shouldn’t be embarrassed to ask for help, and to talk openly to those that care about them. This has made the biggest difference to me, and whilst it can be difficult to deal with sometimes, it doesn’t have to stop you from living your life to the fullest 💜 #LiveWellWithIBD #CrohnsandColitisUK #CrohnsandColitisAwarenessWeek2018 #CrohnsDisease #UlcerativeColitis

Her teammate for this week, Duncan Scott, has had a fantastic short course season, breaking multiple Scottish and British records. Scott has done a lot for British Swimming on the international stage, notably becoming the first male swimmer to make an Olympic final in the 100m freestyle since 1968 (finishing 5th overall at the 2016 edition of the games).

After winning his first individual world medal last year at the World Championships and becoming the first British man under 1:45 in 200 free, Scott’s recent form promises an exciting next 6 months for the Scotsman.

Heading up the training group is Head of Elite Development coach Tim Jones. Speaking on the camp, he said; “We have a tried-and-tested formula to enable us to make the most physiological gains possible, and we are working to that this time around once again. The environment and facilities here in Flagstaff are wholly conducive to getting the best out of the camp”.

He added, “The group of athletes here are of an incredibly high standard and, as expected, they are all going about their business in a professional manner”.

Probably nothing but a group photo seemed to show O Connor has strapping on her shoulder. Hopefully, it’s nothing significant and only there as a precaution.

Hey altitude training, another training method that has been shown to have little to no benefit and make actually be detrimental! Sports are full of this

Heres just two of many papers about it:
Does ‘altitude training’ increase exercise performance in elite athletes?
Altitude training for elite endurance athletes: A review for the travel medicine practitioner

Vote Up1-1Vote Down Reply
Coach A

The facility is not Hypo2’s. It’s northern Arizona university’s Aquatic and Tennis Center, opened in February, 2016. Hypo2 is a company that arranges camps.