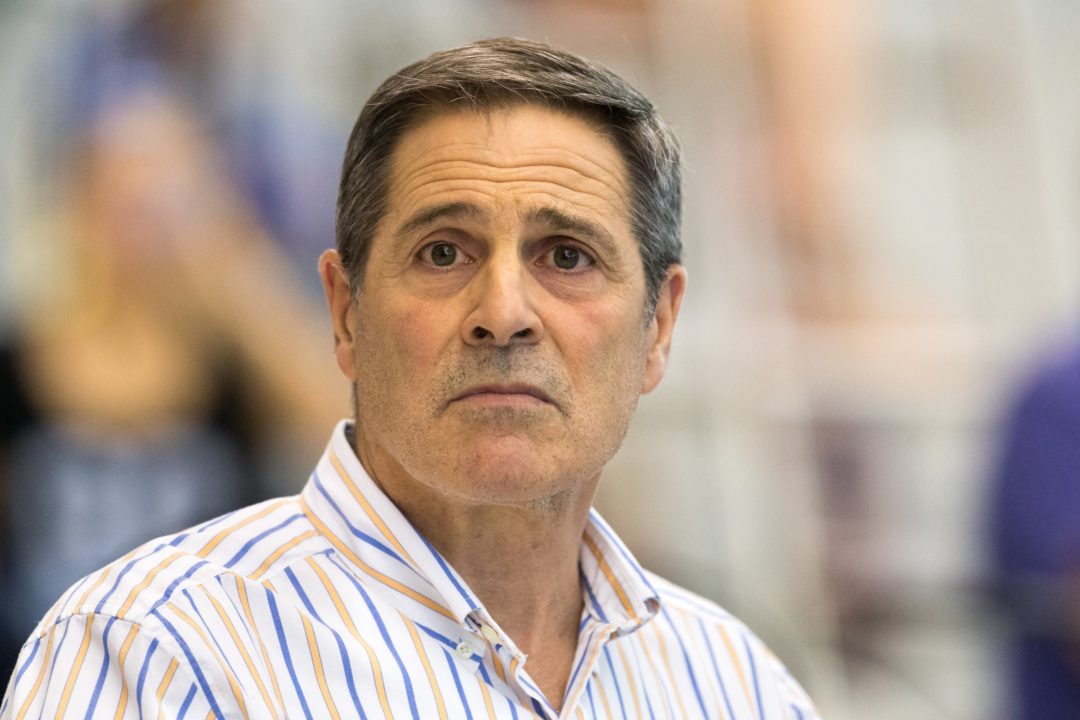 Longtime UVA coach Mark Bernardino landed himself an associate head coaching position at the Univeristy of South Carolina, looking to shake up the SEC powerhouse. Archive photo via Tim Binning/TheSwimPictures.com

Henderson joins the W&L Swimming coaching staff after having spent the previous two seasons as the graduate assistant coach at the University of Arkansas.

Mark Bernardino just landed an associate head coaching position at the University of South Carolina only a year after his abrupt departure from UVA LINK, where he won 27 ACC Championships.  Bernardino reigned as king in the ACC swimming world for 35 years, but it seems as though he’s ready to shake up the SEC swimming power house.

After retiring from UVA, Bernardino signed a non-disparagement clause, meaning neither party can speak poorly about the other to a third party, even when other employers inquired about Bernardino himself.  Another stipulation of his retirement was that UVA agreed to pay Bernardino his $104,000 salary for the next two years regardless of whether he found a new job or not.

While there could be mixed emotions about where Bernardino has chosen to continue his esteemed coaching legacy, South Carolina is nothing but excited to start this new chapter with one of the greats.  USC head coach McGee Moody said, “we are very excited about adding Mark to the staff…He has a proven track record of success on the national and international stage…We look forward to getting him on campus and getting to work”.

Bernardino hopes to add to his coaching resume now that he resides in what he calls “the premiere swimming and diving conference in the country”.  The Gamecocks have been in the lower tier of the SEC with the men finishing 33rd at the 2014 NCAA Championships, and 10th and the SEC Championships. The women’s program finished 11th at the 2014 SEC championships.  Bernardino hopes to turn that around this year as is the college swimming world to see what’s in store for the South Carolina Gamecocks this coming season.

Huge loss for UVA and they replaced Mark with the Busch bozo’s! UVA athletics have lots of issues these days!

Congrats to Mark for landing on his feet, I’m sure he will help strengthen the USC Swim program.

Great news for both USC and Mark!

Can an asst coach for one team invite players from another team to his house for dinner. Just asking.

I’ve known Coach Bernadino for over 20 years. I’ve never known him to say or do anything to merit the treatment (Shafting) he got from UVAs’ AD. I am glad he found an opportunity at South Carolina. Go Mark

In today’s work environment, you cannot get away with the stuff he was doing. At least AD gave coach a one year probation. Coach didn’t fix the problems. Pretty sad on coaches part.

Please elaborate on what Bernadino was doing and the problems he didn’t fix.