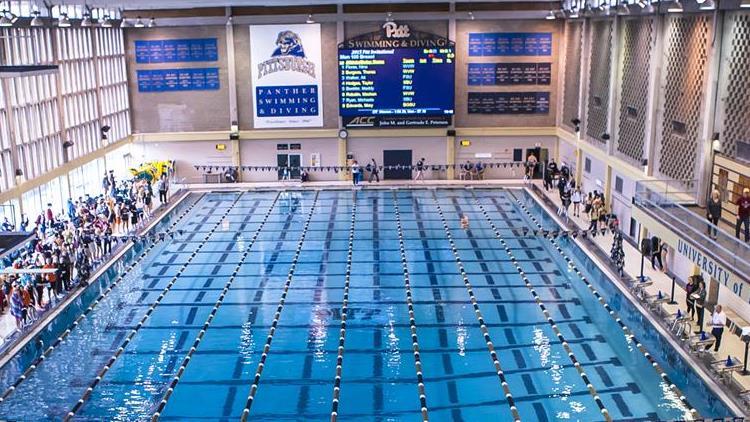 Pittsburgh's Blaise Vera now owns the #1 and #2 times in the nation in the 50 and 100 free, but the Notre Dame men and women swept Pitt over the weekend. Archive photo via courtesy of Pitt Swim Camps 2017

The Fighting Irish toppled the Panthers by a score of 223-125, winning every swimming swimming event except one.

Pitt didn’t win a single swimming event on the the first day, but did get a win from Valerie Daigneault early on the second day, as she took the 200 free in 1:51.31. Ignoring exhibitioned results, that would be the only win in the pool for the Panthers, although they also got a win in the platform diving event courtesy of Amy Read.

Pitt’s Blaise Vera lit up the pool, but the speedster’s efforts weren’t enough to top a deep Notre Dame team, as the Fighting Irish men won by nearly the exact score as did the women’s, despite Pitt men taking more events their than female counterparts.

Vera got things rolling Friday afternoon by blasting a 19.53 leading off Pitt’s 200 free relay, a time that held up through the weekend as the fastest time in the nation. That’s his fastest time outside of ACCs or NCAAs, and almost 0.7s faster than he was against Notre Dame last November.  He also won the 50 free and 100 free in 19.75/43.30, anchored Pitt’s medley relay in 42.40 anchor, and led off the 400 free relay in 43.15, the 2nd-fastest mark in the nation behind Daniel Krueger’s 43.03.

Cooper Van Der Laan swept the breaststrokes for the Panthers, going 54.67/2:00.49, as the Pitt men ended up winning a total of 7 events.

The distance duo went finish 1-2 again in the 1000 free on Saturday, with Yeadon winning in 9:02.42 and Hoagland taking 2nd in 9:11.78. What might have been even more impressive, however, is that after a pretty short turnaround, Yeadon jumped back in the water to anchor the 400 free relay. His 44.21 leg was the fastest on either team except for Vera’s leadoff, and it proved decisive, as he brought Notre Dame from behind to win, 2:58.01 to 2:58.07.

PITTSBURGH, Pa. — Building off Day 1 success at Pittsburgh, Notre Dame soundly defeated the Panthers on the final day of competition. As usual, the Irish capitalized off of individual wins, posting 21 individual wins from 12 different swimmers and three divers on the weekend. Notre Dame also improved relay finishes during the weekend, winning six of eight relay events.

Notre Dame began Day 2 strong, with wins in the men’s and women’s 200 medley relay. The women’s team of Carly Quast, Coleen Gillilan, Erin Sheehan and Rachel Wittmer posted a 1:42.24, while the men’s team of Jack Montesi, Matt Limbacher, Zach Smith and Aaron Schultz marked down a 1:29.46.

Gillilan put up her fourth individual win of the weekend (sixth overall) in the 200 Breast with a 2:15.65, while distance veteran Zach Yeadon raced to a win in the men’s 1000 Free. He was followed in the standings by Jack Hoagland, Will Barao and Luke Thornbrue, continuing their success in the distance events from last week.

Immediately following Yeadon’s win in the 1000 Free, he got back in the pool to swim the last leg of Notre Dame’s 400 Free Relay, teaming up with McKeen, Aaron Schultz and Topher Stensby to post a win (2:58.01).

“We were able to spread the wealth around at Pittsburgh, but also challenge some of our athletes with some interesting doubles,” said Mike Litzinger, head swim and dive coach.

“[A win] that stands out are Zach Yeadon’s back-to-back wins in the 1000 Free and swimming the anchor on the 400 Free Relay for the win,” he noted, referencing the immediate turnaround for Yeadon. “That is a tough one, and he handled it well.”

The Irish saw success during the weekend in relay competition, winning six of eight relay events over the extended two-day meet.

“In this event schedule, we are able to swim multiple relays, and it gives us some flexibility to see other athletes’ performances,” Litzinger explained. “Our relays are still a work in progress, and we are looking to point them toward a peak performance at the end of the year.”

“I am very pleased with how the whole team and the divers took advantage of this opportunity to compete,” Litzinger expressed. “Now, we can dial in on the Ohio State Invite and close out the semester.”

The Irish will have two weeks to prepare before traveling to the Ohio State Invitational Saturday, Nov. 21.

PITTSBURGH—The University of Pittsburgh swimming & diving team won five swimming races and posted numerous impressive performances on Saturday in ACC dual-meet action against Notre Dame, but the Panthers fell to the Fighting Irish in both meets.

Saturday’s action produced several thrilling events that came down to the final moment, with the Panthers winning some of those races during the swimming portion of the day’s competition.

“The final result obviously wasn’t what we wanted,” Pitt head coach John Hargissaid. “But we were better today than we were yesterday. There was a lot of energy in the building, which we have to thank the alumni and parents for that. We’ll get back to work and continue to improve and get healthy heading into our fall invitational at Purdue in a couple weeks.”

Newcomer Cooper van der Laan and junior Blaise Vera each took an individual event title against the Fighting Irish for the second time in as many days. Vera won the 50-yard freestyle with a very strong time of 19.75 seconds, while van der Laan again dominated in the breaststroke, winning the 200-yard heat with a time of 2:00.49.

Senior Samy Helmbacher crushed the competition in the 200-yard individual medley in 1:49.76. And senior Valerie Daigneault emerged with a women’s swimming victory in the 200-yard freestyle Saturday, finishing her heat in a flurry to place first with a time of 1:51.31.

The Panthers also saw some impressive efforts by underclassmen. Freshman Jerry Chen more than held his own in the 200-yard breaststroke by competing for the victory before finishing in 2:04.11, while sophomores Kailyn Swantek and Madison Nalls each took second in freestyle events with strong swims.

The Panthers are off next weekend before they head to the Purdue Invitational from Nov. 21-23 for three days of fast and competitive fall invitational action in West Lafayette, Ind.

Pitt has done a sneaky good job of developing their sprinters recently, Vera is phenomenal! Definitely a dark horse for both top 3 in both events this year. Hope to see them keep rising in the ACC!

Blaise is a dog. Woof woof.