I Feel We’re Close Enough – What Lies West of Pennsylvania

As I look over the shear mile of a drop that separates myself and Yosemite’s Half Dome, I am overcome…

Oliver Goodman hails from a row home in central Philadelphia, Pennsylvania – just one block east of the Schuylkill River. Along with his two sisters, Rachel and Molly, Oliver grew up tormenting his parents with pranks, booby-traps, and most notably, bringing home almost every puppy he and his siblings could find. Oliver started swimming his freshman year of high school and soon was recruited to swim in college. Shortly after the start of his collegiate swim career, however, Oliver fell in love with biology, writing, and the American West – and ultimately decided to give up competitive swimming. With only two years until graduation, he hopes to soon fulfill his dream of one day living in a place where his first view every morning will be of the Tetons or the Sierra Nevada. Oliver is currently a Biology major at Wesleyan University – where he does lab research in accordance with Death Valley National Park.

Oliver’s golden retriever, Freddy, joined him early in his sophomore year of college, and remains by his side nearly 24/7 – even sometimes attending science lectures. In addition to Freddy, Oliver’s big sister’s golden, Trevor, is also very fond of going to classes, and never seems to trail too far behind him. 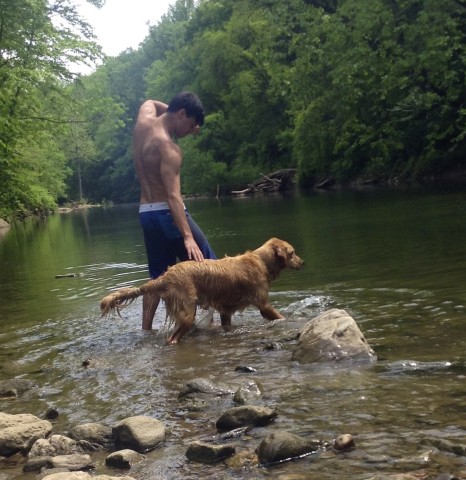