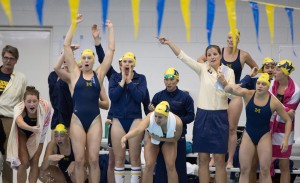 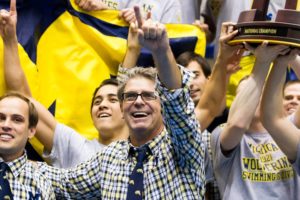 If Michigan wants to defend their 2013 NCAA Men’s Championship, they’ll need to find a sprint backstroker.

Aaron Ghiglieri
Born Nov. 17, 1993 to parents, Andrew and Leslie, Aaron Ghiglieri is a freestyle and butterfly swimmer at the University of Michigan. Ghiglieri is originally from the state of Oregon, where he graduated from Cascade Christian High School. As a student at Cascade Christian Ghiglieri was named to the Honor Roll three times, and won three Oregon state championship titles. In high school Ghiglieri was a member of his high school’s first-year team, and he had only one other teammate. The same year he also found out that he had a sensitivity to gluten, cutting down on much of the wheat and dairy in his diet. At the time of his verbal commitment Ghiglieri added to an already deep Michigan butterfly squad, but he also was a much-needed piece to Michigan’s sprint freestyle. The six-foot Ghiglieri took all five official recruiting visits before deciding on Michigan – he visited Michigan, Wyoming, Texas A&M, Louisville, and Boston University. Ghiglieri used his redshirt his first season at Michigan, and he’s currently a RS sophomore and biology major in the College of Literature, Science and the Arts.

Michigan
2012-2013
As a freshman Ghiglieri used his redshirt year.

2013-2014
In his first season competing for Michigan, he did not compete at the Big Ten Championships, but Ghiglieri did swim in the dual meet season. He made his collegiate debut against Iowa, finishing third in the 50 freestyle.

2014-2015
Ghiglieri is currently in his RS sophomore season as a Michigan Wolverine. He made the Academic All-Big Ten team, and swam three events at the AT&T Winter Nationals.

National Competition
As a high school student Ghiglieri won three total Oregon state championships – once in the 200 IM and twice in the 100 butterfly. He broke four state club records as a freshman, and in the same year he even finished third in the 50 freestyle at the state meet. Ghiglieri qualified for the Junior National Championships from 2008 to 2011.