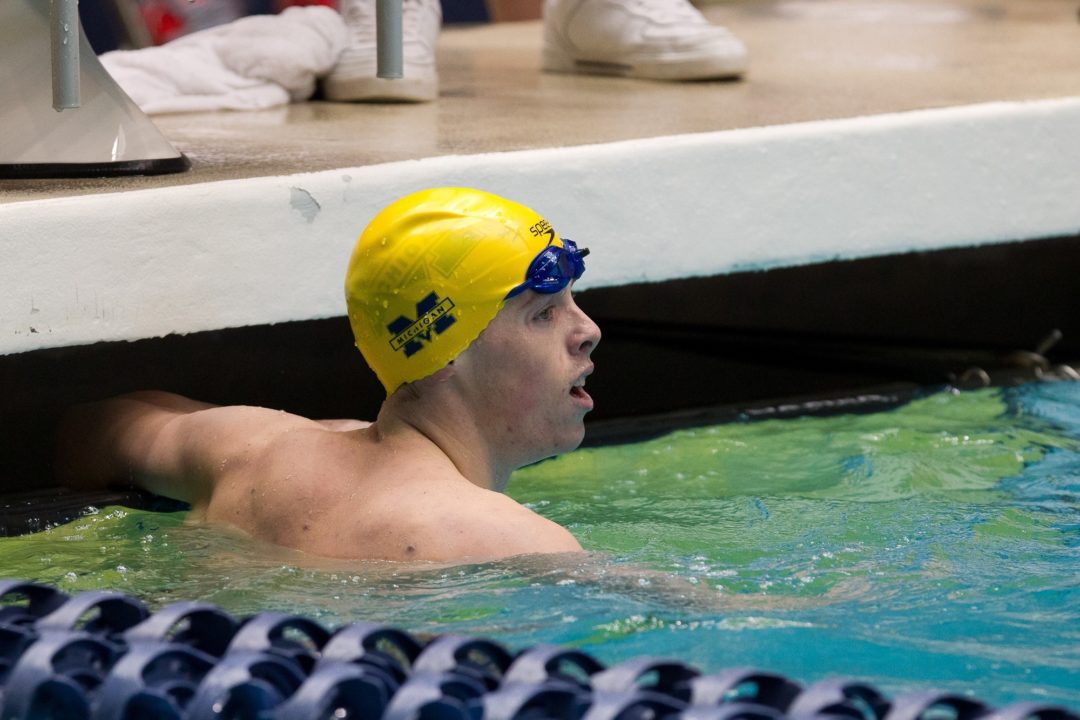 This past week the Big Ten saw one dual meet, several roster spots, and a water carnival. Michigan’s now faced two Big Ten competitors and it’s not even the middle of October yet.

The Michigan men’s team won every event in their meet against Minnesota, led by Connor Jaeger and Richard Funk who each picked up a pair of victories and buoyed by a strong sprint group. Meanwhile, the defending Big Ten champions bested the Wolverine women, 196-99.

The Gopher women started off the meet with a win in the 200 medley relay, which they led off with two Big Ten individual event winners, Tess Behrens and Haley Spencer. Michigan’s Ali Deloof and Angie Chokran actually did a good job hanging with them on the first 100, but their team lost a lot on the back half.

The Gophers really racked up points in the 200 free, taking the first four spots with two girls under 1:50.

Minnesota’s Tess Behrens won both the backstroke events. Gopher breaststroker Haley Spencer seems to be given a run for her money by freshman Kierra Smith, whose 2:13.8 in the 200 breast was a huge swim for in-season. The two were just .03 apart in the 100, going 1:03.05 and 1:03.08. 1:03’s strong for early October, but both should get faster as the season goes on.

The Michigan women were looking fairly weak in the sprint events, with nobody under 24 in the 50 or 52 in the 100. Their men, on the other hand, excelled there.

Zach Turk, the Kenyon alum who saved a year of eligibility for grad school, showed he’s going to be a huge asset for the Wolverines. His 19.3 anchor on the winning 200 medley relay was a definite highlight, and he picked up an individual win with a 20.1 in the 50 as well. His teammate, sophomore Bruno Ortiz, was close on his heels in the 50 with a 20.3. In the 100 they swapped places: Ortiz winning with a 45.0 and Turk right behind him with a 45.3. Those two aren’t the only ones who can sprint, either: Bruno’s brother Miguel Ortiz led off the 400 free relay with a 45.1, and Sean Fletcher, Hassaan Abdel Khalik, and Michael Wynalda all split 44s, Wynalda with a big 44.1 on the anchor leg.

Funk’s 54 and 2:01 led them through the breast and freshman Dylan Bosch, who was Big Ten freshman of the week last week, proved he’s consistent with a 1:47 win in the 200 fly.

Full results here for men, and here for women.

The Michigan Water Carnival featured some swimming and a lot of silliness, including a 50 underwater race, a bicycle going off the 10m, and a flip turn 50 breast. See highlights here.