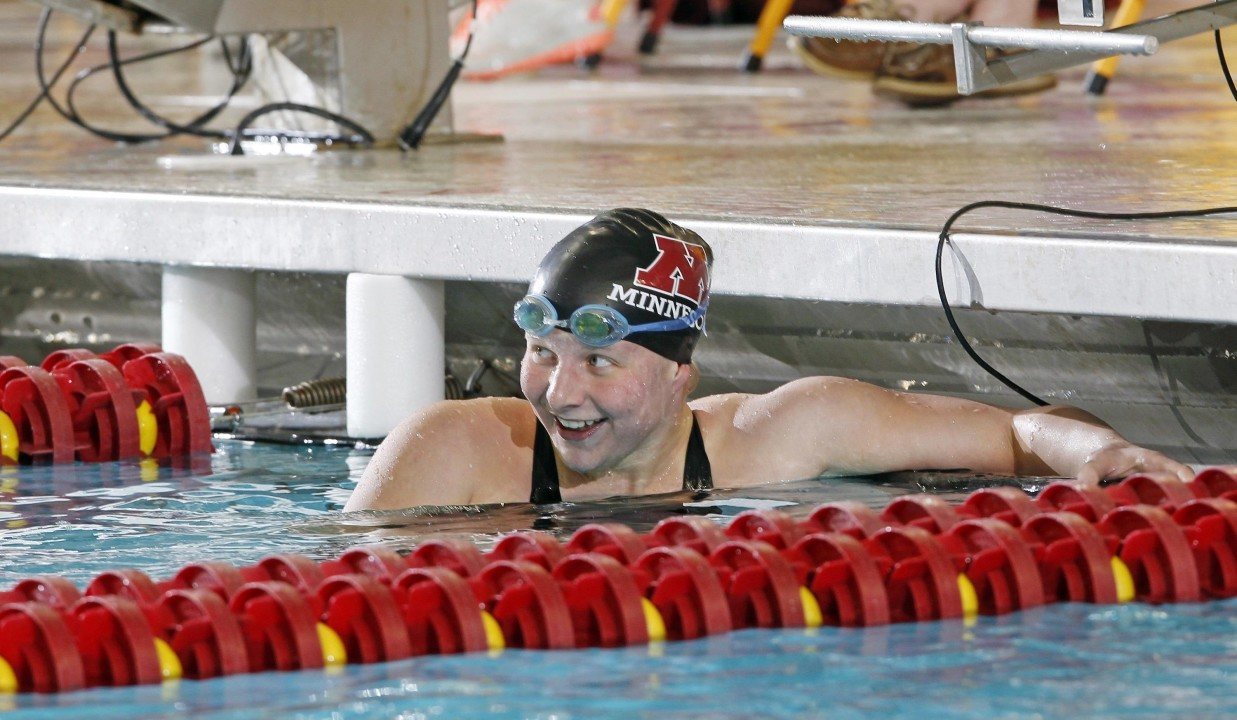 While it is always great to see individuals perform well in the collegiate scene, competitions in the NCAA are ultimately... Archive photo via Minnesota Athletics

While it is always great to see individuals perform well in the collegiate scene, competitions in the NCAA are ultimately all about the team, and in the Big Ten, the Minnesota Golden Gophers are the team to beat. Having completed a four-peat at the Conference Championships last year, the ladies from Minneapolis will try to go for their fifth consecutive team title at this week’s Championships, a feat that hasn’t been accomplished since 1998 when the Michigan Wolverines captured their twelfth straight Big Ten Championship title. Leading the Gophers into battle beginning tomorrow and continuing for the next three days will be Lauren Votava out of Des Peres, Missouri, and her sprinting abilities will be a huge factor in the Golden Gophers’ efforts both individually and on relays.

Representing Rockwood Swim Club in club competitions, Votava enjoyed success both on the Junior National and Senior National scenes before joining the Golden Gophers for her freshman season. Aside from holding multiple team records across the 11-12 and 13-14 age groups in both short course and long course swimming, she also had career high finishes of 9th in the 100 free (57.47) and 18th in the 200 free (2:04.86) at the 2011 Junior National Swimming Championships. The following summer, she would also participate in the 2012 Summer Olympic Trials, claiming finishes of 122nd in the 100 free (58.32) and 96th in the 200 free (2:06.57).

Though it is evident that the University of Minnesota has had a stranglehold on the top of the Big Ten ladder for several years in a row now, their margin of victory over the Indiana Hoosiers has diminished slowly year by year (160 points in 2013, 111 points in 2014, 27.5 points in 2015). If the Golden Gophers want to walk away from the 2016 Big Ten Championships with their fifth consecutive Conference team title, it will take a disciplined and confident team working together to hold off their hungry competition, and that team-driven effort will need to begin immediately when the 200 medley relay kicks off the action tomorrow at 6:30 P.M. With half of the team’s roster comprised of freshmen, Minnesota is lucky to have an experienced veteran like Lauren Votava leading by example each and every time she steps up on the blocks. With a wealth of big race experience under her belt, look for her to set a commanding tone when duty calls.

Major/Degree: Biomedical Engineering
Favorite Event: 100 free (or anything on a relay)
Favorite Hobby: I suppose swimming doesn’t count here. I love to read. I’ll read anything I can get my hands on.
Favorite Movie: How to Train Your Dragon! Or Return of the King (LOTR). It’s a close call.
Person You’d Like to Meet Growing Up: Hmm… Honestly I can’t think of anyone.
Favorite Food: French Toast! But I love trying new foods. Ethiopian was really good recently.
Favorite Pre-Race Meal: Something simple like oatmeal or pasta. I don’t need help feeling like I’m sinking.

Like most kids I tried a lot of sports but really hated anything that made me work hard or sweat so I quit almost everything. I did like swimming for my neighborhood team though and my coach suggested I try a year-round club team when I was 11. I had no idea what I was getting into (and neither did my parents!). I actually HATED it for an entire year until I went to Zones and watched people going fast and realized I wanted to be good at it.

Probably Big Tens my freshman year. I didn’t do high school swimming so this was my first experience with really competing as a team where the team performance mattered a lot. Swimming for my team is the best part of swimming and it was so fun swimming and knowing your team had your back. Just being on relays and representing my team and school and doing awesome things with my best friends was an incredible experience.

You have qualified for NCAAs each of your first three years with the Golden Gophers, and have accumulated numerous All-American and All-Big Ten accolades amongst other honors in the process. It is not difficult to see that you have a very good grasp of what it takes to deliver at the end of the season when your team counts on you the most. What does Championship Season mean to you personally, and what do you think has allowed to you be successful with Minnesota over the past three years?

I feel bad cause this might be a really repetitive interview, but Championship Season for me is truly all about the team. It’s when all your hard work pays off and when you step up for your team to succeed. I think the best thing about it is that you’re a part of something bigger than yourself–you’re not swimming to go a good time for you, you’re swimming to help your teammates. Someone told me once that giving energy to your teammates at meets is the best way to swim fast. It seems counterproductive to give energy in cheering and supporting and encouraging, but I swim so much better when I’m focused on the team’s success (and it’s way more fun!).

The Golden Gophers are replete with freshman talent this season, with a whopping 18 freshmen donning the Maroon and Gold across the swimming & diving rosters. As you are one of only four seniors on the team, have there been any challenges your team has had to overcome this season with having such a young roster?

We weren’t really sure what to expect with the large class coming in. It was a bit of a wild card, and I think that’s caused a lot of people to count us out. When your freshmen are half your team it’s an interesting situation for sure and you don’t know what you’re getting into. But I really think having a young team is actually a strength. They all work so hard, and I’ve absolutely loved getting to know all of them. The only downside (technically) is how most people don’t think we’re even going to be competition for the Big Ten title. I have no idea how the meet is going to go obviously, but I also couldn’t care less if people count us out. We’ve worked really hard this year and I think some people will be surprised in February. Our goals are just to swim fast and have a ton of fun.

With four consecutive Big Ten titles in the books, Minnesota has put on quite a run at the conference level. What does it mean to you to be part of such a dominant program, and what has made the Golden Gophers so consistently formidable each and every February and March?

What makes us great in championship season? The team (it’s kinda the answer for everything). We’re all close and support each other no matter what. What does it mean to me to be a part of this program? Like I said before, it’s an incredible gift to be able to swim here and I’m so thankful for the opportunity. Kelly and Terry tell us that our goal should be to leave the team better than you found it and that’s been something I’ve tried to do especially my senior year.

There’s a lot… My parents are incredible and have supported me no matter how I swim. Obviously my coaches, both college and club, and my teammates have helped me so much. But more than all of those awesome people, God gave me the ability to swim and all the opportunities I’ve had. My faith is very important to me and without the unconditional love of my Savior, I don’t know where I’d be.

I actually just got accepted into a PhD program in Biomedical Engineering at Washington University in St. Louis last week. I’m pretty sure that’s where I’ll be next year and I’m really excited about it.

It’s going to be a lot of fun for sure. Our focus is just on racing hard and having fun.