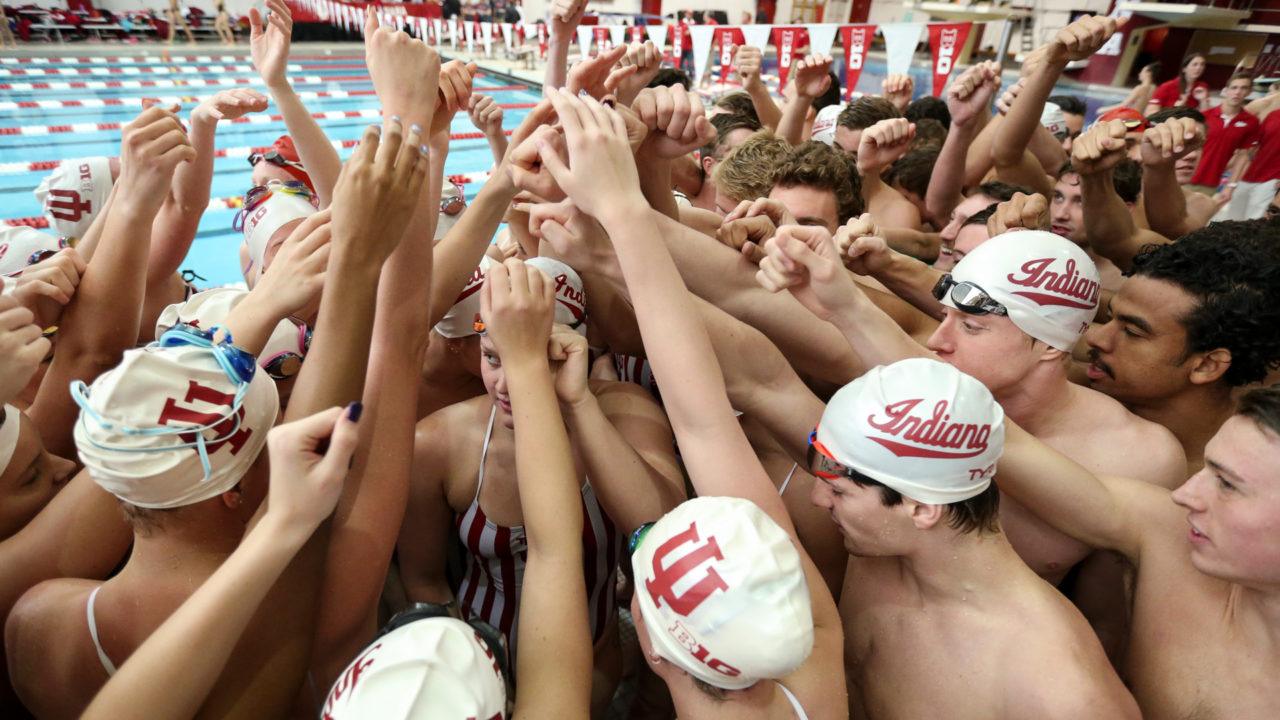 Now that all the major mid season invites are complete, pretty much every team in the country has had a... Current photo via Indiana Athletics

The first conference up: the Big 10. Last year Michigan won the women’s meet by a healthy 300 point margin over Indiana and Indiana took the men’s meet by a narrow 40.5 point margin over Michigan. This year, Indiana and Michigan appear ready to take the two top spots in both meets again, and there’s a reasonable chance of a close race for the title in both the men’s and women’s meets.

In the current women’s Swimulator rankings Michigan hold a minuscule 5.5 point lead over Indiana (1199.5-1194). Last year as of December 15th in the same Swimulator rankings Michigan had 1330 points to Indiana’s 1013. At Big 10 championships neither team deviated dramatically from their mid season projection Michigan scored 1371 swimming points, 41 more than projected, and Indiana scored 1045.5 swimming points, a gain of 32.5.

If that pattern repeats itself, the meet figures to be much more competitive this year. Indiana returns all 107 of their diving points from last year, and Michigan return 82. At this point, the gap between these too teams is too close to call. Should be exciting in February.

There is some evidence that Michigan rested a bit less than Indiana this year at their mid season meets. Indiana’s swimmers were an average of 1.1% faster than last year at their mid season meet and Michigan were on average 0.0% faster. That data could mean any number of things. One possibility is that Michigan have more time than Indiana left to drop at the end of the year. If that’s the case, expect another easy Michigan win. Another possibility is that Indiana’s swimmers are just better this year.

That the Swimulator ranking places these teams on even footing may come as a surprise to anyone following the nationals Swimulator projections where Michigan is ranked first overall and Indiana is a relatively distant 9th with barely half Michigan’s projected point total. These seemingly incongruent results come about because a conference meet scored to 24 places against lesser teams is a very different meet than nationals. At nationals, great relays and a few truly elite swimmers can go a long way. In a conference format, the bottom half of the roster matters a lot, and the advantage gained from top end swimmers is lessened. In the nationals projection Mackenzie Looze and Shelby Koontz project to 0 points, but in the Big 10 projection, both score over 60.

By projected points, Michigan’s top 9 swimmers out score Indiana’s top 9 swimmers by a decent margin (672-619), but after that Indiana’s depth takes over (Michigan’s 16th swimmer Katie Duggan scores 11, Indiana’s 16th Ileah Doctor scores 24). When the meet is as close as this one appears to be, getting as many of your 10th-20th swimmers into B and C finals as possible can make a big difference.

Given that, Ohio State looks like a slight favorite for 3rd with a possible great competition between Wisconsin and Minnesota for the 4th spot. Northwestern Purdue could be competitive for 6th. If Purdue can avoid dropping as many swimming points this year, their elite divers should be able to make it close.

The men’s meet is also shaping up to be competitive, but unlike the coin flip women’s meet, the Indiana men look like a slight favorite. Michigan hold a narrow 1416.5-1378.5 advantage over Indiana in the current Swimulator projection. Last year at this time Michigan held a 1444-1198 advantage over Indiana. At Big 10s’s Michigan scored 1519.5 swimming points, and increase of 75.5, and Indiana scored 1373, an increase of 175. Indiana’s 285-98 diving point advantage was enough to carry them to a narrow 40.5 point win.

This year Michigan’s mid season margin has been reduced from 246 points to 38 points. Working in Michigan’s favor is Indiana’s reduced advantage in diving. Indiana graduated 126 diving points and Michigan return all of their diving points. Indiana have some solid freshmen divers, but none of them are Michael Hixon.

However, despite their diving advantage and swimming points upside, an Indiana win isn’t a guarantee. Both teams will be competing with one eye on this meet and the other on nationals. Decisions about who and how much to rest will be a factor. Michigan are fast enough and deep enough that this meet is unlikely to be completely decided before the final day. A single relay DQ could suddenly make this meet very competitive.

The biggest riser in these rankings is Purdue who have 203 more points than they did at this point last season.  With Ohio State 103.5 points behind where they were at this point last year, Purdue looks on track to significantly narrow the nearly 600 point gap that existed between them in 4th and Ohio State in 3rd last year. They remain 197 points back with a similar number of returning diving points, so 3rd is likely still be a pipe dream; however, they are trending in the right direction.

So much LOL right here

Where is the D2 analysis!

I want the results of the Tampa invite before I do that. The Tampa Invite doesn’t finish until tomorrow. Why that invite runs Saturday to Tuesday confuses me, but that’s what it does. Then the data from that meet needs to get into the database which takes a few days typically. Then I’ll write it up.

Haven’t forgotten about it.

And the Delta State invite.

OSU didn’t rest at all for a mid-season meet, so expect them to drop big time at Big 10s.

Neither did most of the B1G team