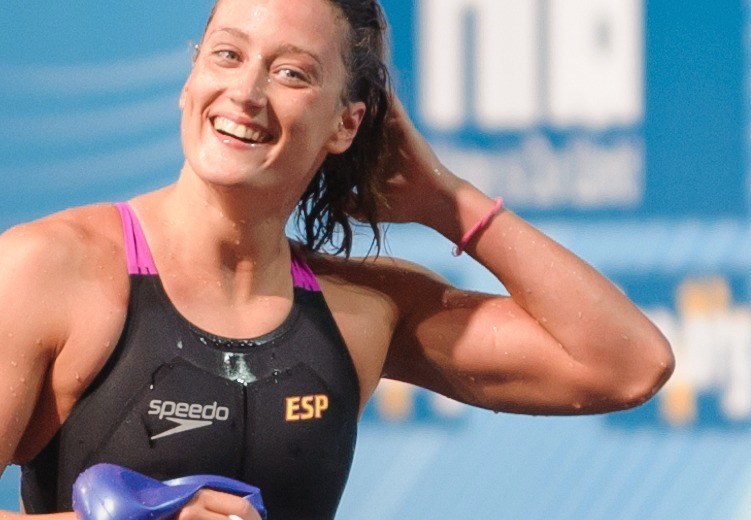 Mireia Belmonte has brought her three-session title total to three at the Spanish Open Championships. Archive photo via Victor Puig

Though she was not to break any World Records on Saturday morning to match the one done on Friday, Spanish star Mireia Belmonte was impressive in a different sort of way on day two of the meet.

In the 200 fly, Judit Ignacio the teenager was 2nd in 2:07.47, which is her lifetime best as the heir apparent to Belmonte. She hung tough with her country mate on the front-half on this race, but Belmonte’s last 75 meters were unmatchable.

In other racing, Fatima Gallardo broke a National Age Record in the women’s 50 free, marking a 25.49 for the win in that event at just 16 years old. That broke the 2009 record of 25.57 done by Clara Rodriguez in 2009. The Spaniards have a good young nucleus of female sprinters, as evidenced by this race, that included 18-year old Lidon Munoz del Campo in 2nd with a 25.57.

Sergio Garcia won the men’s 200 breast in 2:09.93, and 19-year old Carlos Peralta took the men’s 200 fly in 1:56.11. Peralta could be the next Spanish butterfly star, as that swim was a two-and-a-half second improvement on his lifetime best, and the fastest time by a Spaniard since 2010.

Victor Martin, who on Friday broke a National Record in the 200 free, added a win in the 400 free on Saturday with a 3:43.06. That put him two-tenths of a second shy of the Championship Record. This race was a battle of champions, as 1500 free winner Marc Sanchez came in 2nd in 3:45.11.

Saturday’s evening session will house relatively few events, though with the exception of one they’re long events. That one exception is the 50 free, which could be due for some fireworks after a couple of sub-22 relay splits on Saturday morning, including a 21.7 from Carlos van Isschot, and the Ortiz brothers set to join the fray.