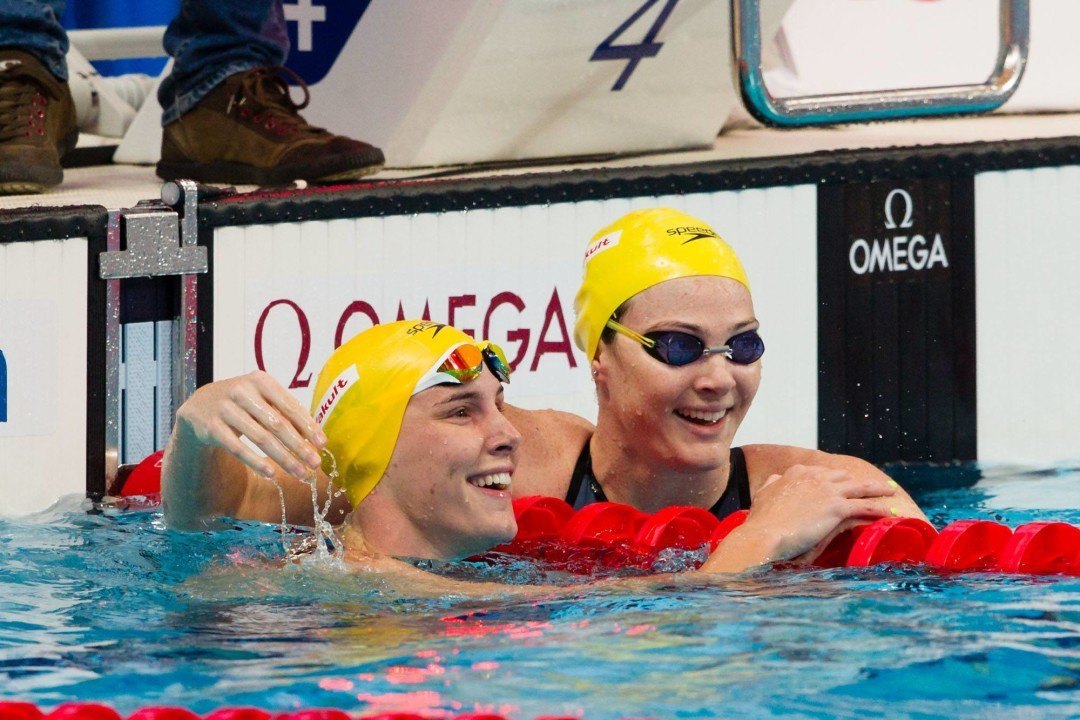 The Australian women scored a new Olympic record this morning, and the world record is well within reach tonight. Current photo via Tim Binning/TheSwimPictures.com

The Australian 4×100 free relay of Madi Wilson, Brittany Elmslie, Bronte Campbell, and Cate Campbell scored a new Olympic record this morning in prelims, finishing first and coming in 1.2 seconds ahead of the second-place American relay. The Aussies finished in 3:33.59.

The previous Olympic record was also held by the Australians, the 2012 relay of Alicia Coutts, Cate Campbell, Elmslie, and Melanie Schlanger, a 3:32.39 set in 2012.

Below is a split comparison between the two swims:

Tonight, the Australians will face off against the Americans, most likely switching Emma McKeon into the mix. McKeon is currently the fourth-fastest 100 freestyler in the world.

The Aussies’ eyes are certainly going to be on the world record tonight. The world record sits at 3:30.98, a mark set by Bronte Campbell, Schlanger, McKeon, and Cate Campbell in 2014 at the Commonwealth Games.

If McKeon holds with her season-best, and Elmslie and the Campbells swim the same times as this morning, they’re looking at 3:31.08, so the world record will be well within reach tonight.

Wow, a 52.6 split for Ledecky after an overly safe start! She just sent a message to everyone that she is going to be a force in the 200.

Weir and Ledecky –will be on relay! (the times don’t lie)

overall about a 53 sec swim from Her…great swim

Ledecky’s split is just fantastic – who would have guessed she can be that fast on a 100 split !!! she is going to be extremely hard to beat in the 200

yeah but according to these experts …that doesn’t matter…..Please don’t kill a good story with facts

Sjostrom cruised a 100 fly about an hour before this. It’s not like she had swam 30 minutes before or pushed it hard. It’ll be a close race but I think Ledecky will win the 200 later this week.

anyone know the fastest women’s split ever off the top of their head?