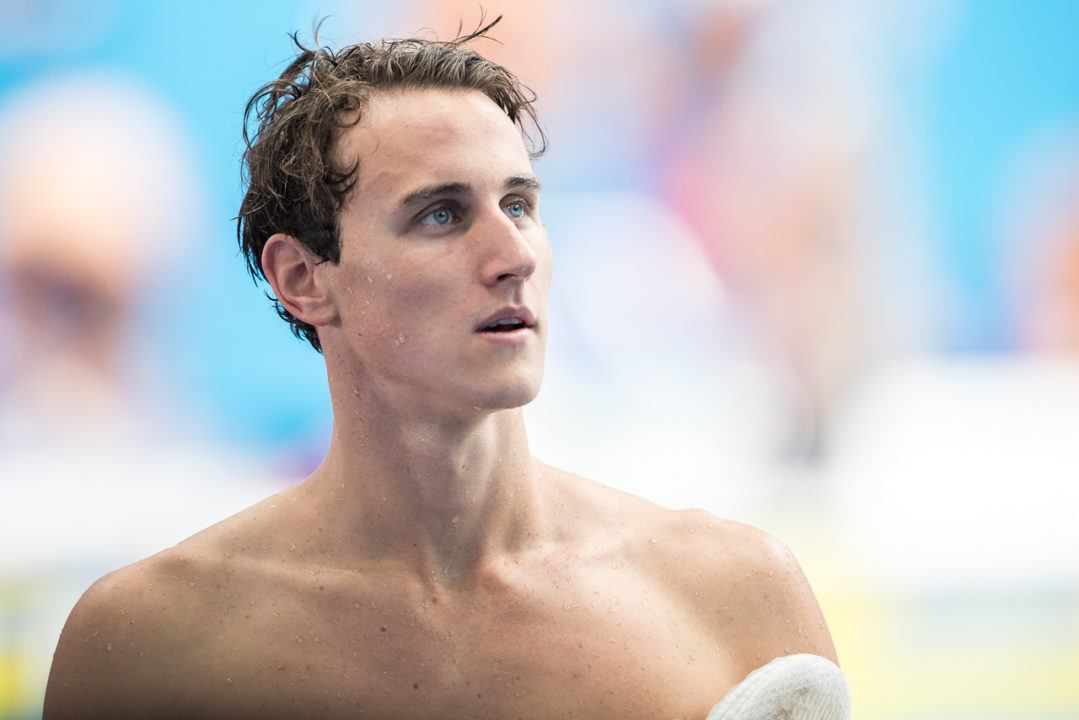 Japanese national champion and World Championships qualifier in the men's 200m free event, Katsuhiro Matsumoto, put down the hammer in his pet event tonight on Aussie soil. That left home swimmers, such as Cameron McEvoy, off the podium. Archive photo via Peter Sukenik/www.petersukenik.com

While Olympic and World Champions, including Emily Seebohm, are about to throw down in Budapest at the 2nd stop of the inaugural FINA Champions Swim Series, Aussie mega stars to the tune of Cate Campbell, Mack Horton and Emma McKeon are racing in an inaugural meet of their own.

The 2nd day of the 2019 Sydney Open Meet transpired at SOPAC today. Not only is the 3-day competition new to the NSW calendar, but it incorporates the UniSport Australia Swimming Nationals. UniSport Australia is the peak governing body for university sport in Australia, representing the interests of 43 universities and over 1 million students nationally. As such, there are university student-athletes intermingled with the elite Australian Dolphins, making for a thrilling mix of amateur and pro athletes.

C1 already powered her way to a 100m free victory last night in a 52.96 stunner and the Olympian followed that up with a solid 50m free win in a time of 24.38. That beat out domestic rival McKeon by just under half a second, with the latter touching in 24.87. Japan’s Rika Omoto rounded out the top 3 in 25.02.

For C1, the Knox Pymble athlete already holds the 2nd fastest time in the world with the 24.00 she put up at the 1st stop of the aforementioned FINA Champions Series. For McKeon, her quickest thus far this season came in the form of the 24.70 she produced while competing at the Queensland Championships last December.

Omoto’s mark tonight was just off her lifetime best of 24.98, a time also established here in Australia. While competing at South Aussie States earlier this year, the Japanese World Championships qualifier clocked her first sub-25 second outing ever, becoming the 3rd fastest woman ever from her nation in the process.

Both McKeon and Omoto had already raced in the women’ 100m fly by the time the 50 free rolled around, with Olympic finalist in this event McKeon notching gold in a mark of 57.66.

That is a solid performance with the Aussie World Trials just next month. She already has been under the 57-second threshold this season with her mighty 56.85 from Adelaide last month, a time that sits as #2 in the world only behind Olympic champion and World Record holder Sarah Sjostrom of Sweden.

Open water national champion Kiah Melverton won the women’s 400m freestyle, clocking the 2nd fastest time of her career. Hitting the wall in 4:07.29, Melverton was just off her lifetime best of 4:06.25 thrown down at last year’s Pan Pacs Trials.

Melverton’s time was enough to hold off last night’s 800m free winner Maddie Gough, who was near her lifetime best in this race tonight as well. Entering this meet the TSS Aquatics swimmer’s fastest was the 4:08.42 produced in Tokyo at last year’s Pan Pacs, a time that rendered the Bond swimmer 4th.

On-fire 20-year-old William Yang, who grabbed 2 Australian National titles last month, carried his momentum to the wall in the 50m fly tonight for gold in 23.46. That’s the 3rd fastest time ever for the Bobby Hurley-trained swimmer, who is the first member of their newlyh-launched swimming club.

A pair of visiting Japanese swimmers in Naoki Mizunuma and Shinri Shioura got on the board in silver and bronze with respective efforts of 23.86 and 23.89.

Matsumoto instead lead a 1-2-3 charge by the Japanese, with teammates Kotaro Takahashi and Daiya Seto hitting the wall in 1:48.05 and 1:48.31, respectively. Of note, 100m free Olympic champion Kyle Chalmers was entered in this event, but was a scratch in this morning’s prelims.

Seto is steering clear of his specialty repertoire of events including the 200m fly and instead trying out new events, as has been his M.O. when racing in Australia. Last night he took the men’ 400m free in new lifetime best, beating out Olympic champion Mack Horton in the process. Look for a separate post shortly on our site on Seto’s Australian racing strategy.

Horton was in the later tonight to contest the men’s 800m free final after having dropped the 200m free final to focus on the longer race. The Melbourne Vicentre athlete finished 3rd in the 800m tonight, registering a bronze medal-worthy effort of 8:02.01.

Touching the wall first, however, was 19-year-old Bond star Elijah Winnington, who blasted a time of 7:55.75 to just out-touch Olympian McLoughlin by only .06.

Tonight’ performance for Winnington checks in as the World Junior Record holder’s personal best and his first time ever under the 8:00 threshold. McLoughlin’s personal best rests at the 7:47.31 he established in Tokyo last year for bronze at the Pan Pacs.

22-year-old Bond athlete Jenna Strauch put up her 2nd fastest 200m breaststroke time ever en route to gold tonight. The Aussie National Champion produced a mark of 2;25.39, holding off Tess Wallace with ease, as Wallace finished in 2:27.01 for silver.

Olympic finalist in this event, Taylor McKeown of Griffith University, rounded out the top 3 in 2:27.65.

Seems like Seto is working on his freestyle, considering he fall behind the WR at the freestyle in the 400im. He wanted it badly

Looks like the Japanese are building great depth for Tokyo 2020