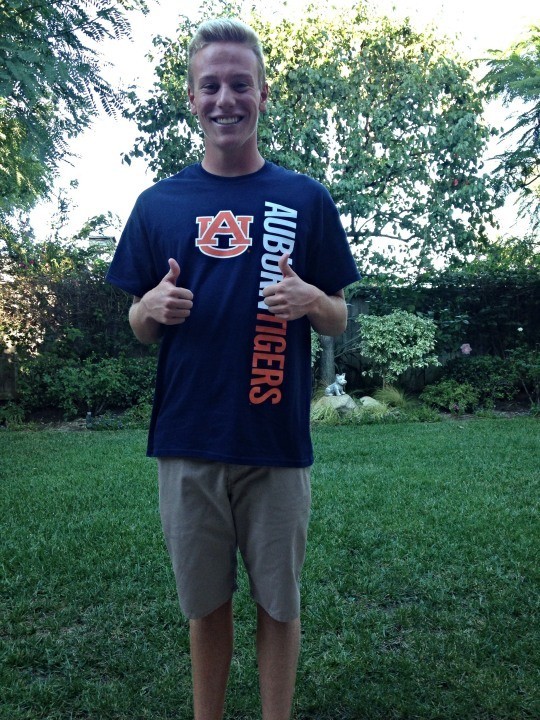 McCloskey is from the San Diego area, where he competes for Rancho San Dieguito and La Costa Canyon High School. He’s the San Diego Imperial 100 butterfly record-holder for his local LSC and is a two-time high school All-American.

“For me, Auburn was the perfect fit,” said McCloskey. “I fell in love with the team as soon as I met them. The team and coaches are an amazing mix of people, and I know that they will provide me with everything I need to be successful.”

McCloskey has been on the rise as of late, though, and his most impressive times might have come out of last summer’s long course season. McCloskey has been 55.60 in the long course 100 fly, along with 1:54.11 in the 200 free and 2:03.63 in the 200 fly. Notable about that 200 fly is that McCloskey is very new to the event – he went 2:06.81 earlier this summer in his first recorded 200 fly swim with USA Swimming, and he cut over three seconds when he swam it again at Junior Nationals.

McCloskey is a great all-around athlete, as he’s also a former World Bodysurfing Champion with a local bodysurfing group the WOD (Womp or Die) Crew.

He’ll join an Auburn program that is well-known for its ability to develop freestyle talent, and also appears to have some major upside in the 200 fly in addition to his quick 100 fly. That should make McCloskey an eventual multi-event factor who could potentially contribute on any or all of the five relays.

Very impressive that he’s part of the Womp or Die crew. Heard that it’s a very selective group. I wish I was him.

Liam is a awesome guy who will do great things at Auburn!

Unbelievable! Liam is one of the most humble kids I have ever met. His work ethic is unparalled in this sport. His achievements in bodysurfing as one of, if not the only, people in his age group is truly remarkable. The more I watch him swim, the more I’m reminded of Vlad Morozov. Go Liam!!!