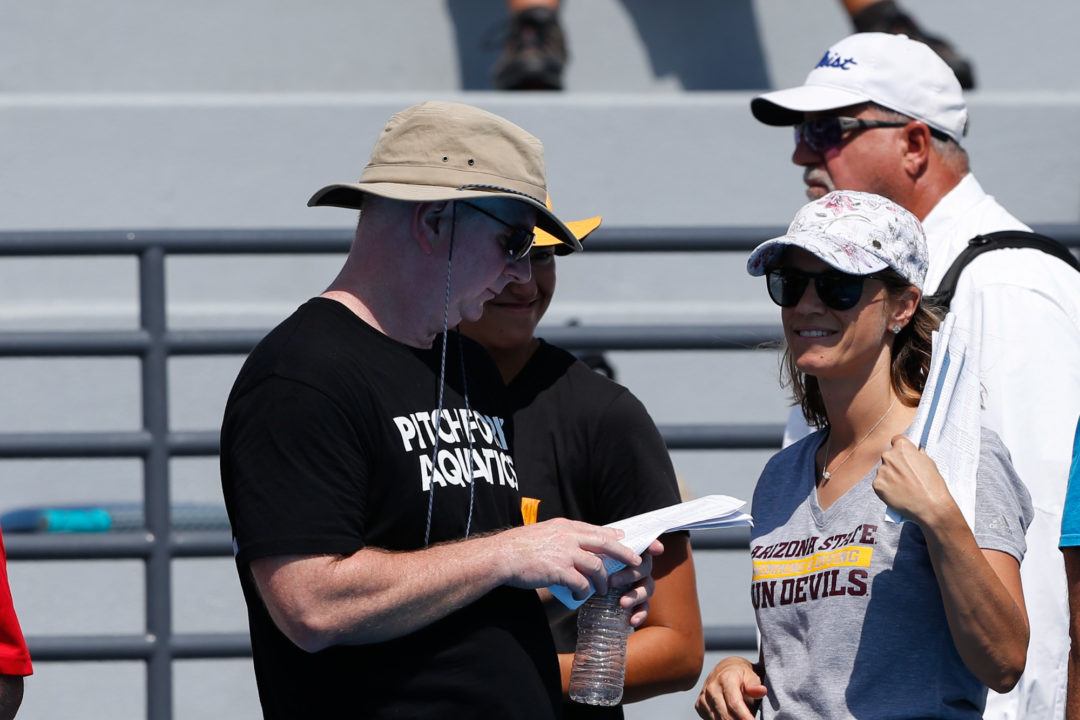 Burckle, a 2008 Olympic bronze medalist, came forward in July 2018 accusing Bowman and former USA Swimming coach Sean Hutchison (now banned from Olympic sports over his longtime sexual grooming and abuse of Olympian Ariana Kukors) of sending her inappropriate text messages in 2011, shortly after her retirement from swimming. Bowman acknowledged that the text messages were sent from his phone in 2011 and said he ‘promptly’ apologized for them.

The school handled the matter internally, issuing Bowman a reprimand on July 22nd – no other consequences for him were reported publicly. The school also released a statement saying that Vice President of Athletics Ray Anderson “communicated to Mr. Bowman that the text message exchange was inappropriate and unprofessional and that no such incidents will be tolerated at ASU.”

In response to a question regarding the decision to retain Bowman on staff, Crow told AZ Central the following:

“First, we had to know what the facts were. He was reprimanded based on the facts we had at the time. Then we launched a full-scale investigation when we had some other information to take a look at. We looked at all of that information, and we found was that there was no merit to it, which means his bad conduct was limited to the message he sent and the allowance of him letting another person use his cell phone. He was sanctioned at the appropriate level for what he was actually responsible for. If there had been more on the table, as was suggested by some other people who told us some things, if those had proven to be true then additional sanctions would have been taken.

“We feel the sanction was appropriate. We feel we did do a thorough investigation. We did look into every allegation that was made. We did use an investigative service to do that. We found his entire conduct was limited to the message he sent and his allowance of another person using his phone for some very inappropriate conduct. And it’s also the case the person he sent the message to, he apologized to and she accepted it. So to us in looking at all these things, that’s what we found to be the totality of this.

Bowman is currently in his third season at ASU after being named head coach in April 2016. In his first two seasons with the school, the Arizona State men finished 4th out of 6 teams twice, while the women’s team finished 6th and 3rd in 2017 and 2018, respectively.

“Some other people who told us some things” very astute

Was there a response by Burckle to the ASU decision?

yes, it would great if they published the findings, love to see swimswam file a freedome of information request.

Shame on you President Crowe for not protecting our children. Your words ring hallow

Forgot this had happened…