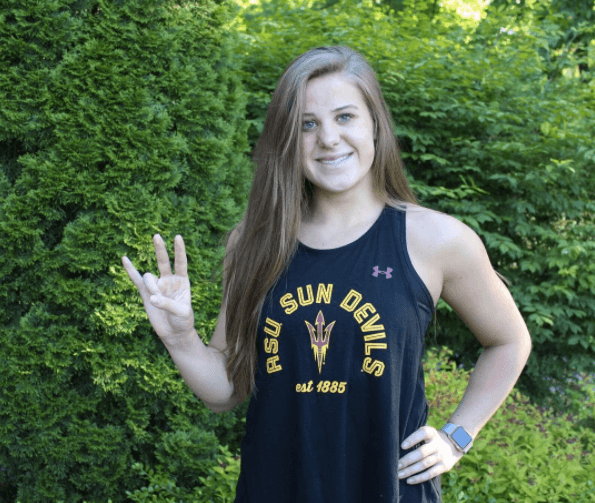 Club Wolverine’s Lizzy Spears has given a verbal commitment to join Arizona State’s class of 2022, coming in with a flurry... Current photo via Lizzy Spears

Club Wolverine’s Lizzy Spears has given a verbal commitment to join Arizona State’s class of 2022, coming in with a flurry of early commits. Spears hails from the state of Michigan, making the trek to Arizona from the city of Saline. She trains with Club Wolverine and swims high school season with Saline High School.

Spears is definitely versatile, and can really swim any stroke. Unsurprisingly, she’s best in the IM’s, primarily the 200.

It’s likely that Spears will take the 2IM/4IM/2BR route for championship meets. She would’ve made the 2017 Pac-12 B final in the 200 breast, and wouldn’t have been too far off in the IM’s.

She’ll get to train breaststroke with rising Finnish sophomore Silja Kansakoski, who won ASU‘s first conference title on the women’s side since 2012 with a 58.44 in the 100 breast this past season. She also scored in both breaststrokes at NCAAs. Kansakoski is one of the best breaststrokers in the NCAA, and Spears will be able to practice and race next to her for three seasons.

Spears joins Abigail Mawae and Brady Estrada in the ASU class of 2022.

Yeah Lizzy!! So proud of you, hard work and dedication pays off.

You’re going to do so well at ASU! They are very lucky to have such a genuine athlete like you in their recruiting class! Now go and make the most of your senior year! I’m proud of you!