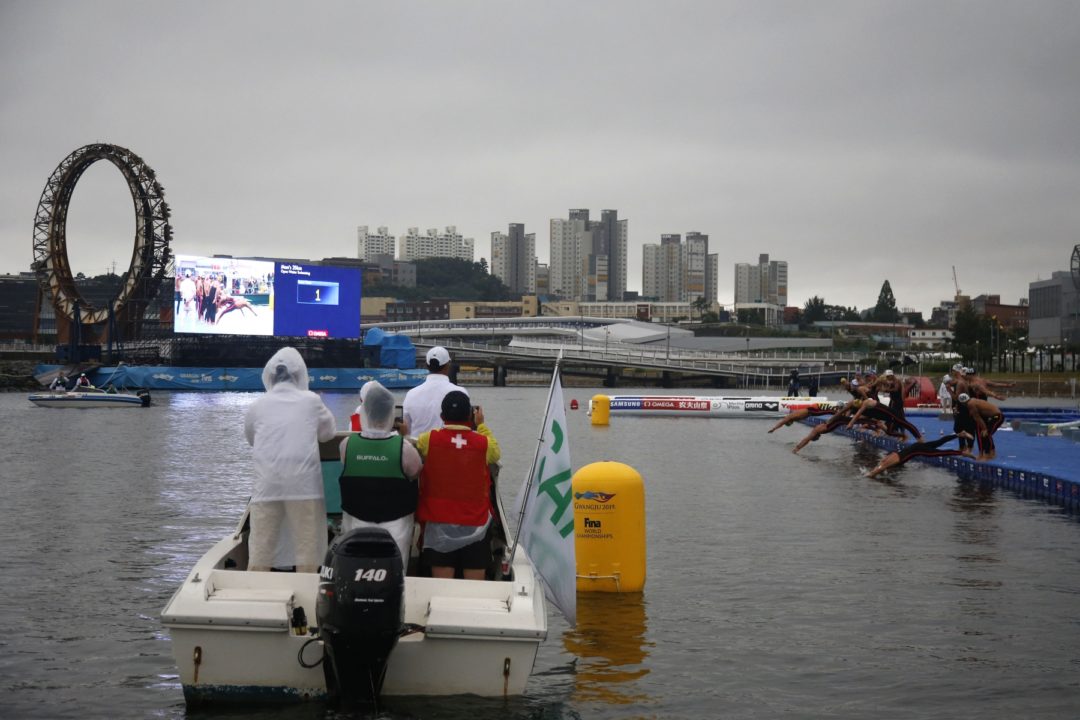 Amid rough conditions in the World Championships' longest event, Gergely Gyurta faded late not because of fatigue, but because of an asthma attack. Stock photo via Satiro Sodré/rededoesporte.gov.br

In the men’s 25km race on Friday morning in Gwangju, it appeared at one point as though Hungarian Gergely Gyurta opened up a huge lead on the 17th lap (out of 20), before eventually fading to 10th place: almost 2 minutes behind the leaders.

As it turns out, it wasn’t fatigue that did him in, it was asthma.

Gyurta is a diagnosed asthmatic, and takes medicine daily to treat the condition, but previously has never had an issue during racing or training. After his big surge 4 hours in to Friday’s 5 hour race, he was shocked by an asthma attack, leaving him with trouble breathing over the last 3 kilometers of the race. Exacerbated by the generally-rough water conditions (heavy rain, 2-4 foot waves), this sunk his chances at the World Championship in his only open water race of the day.

Speaking to the press after the race, Gyurta told the media “I wanted to finish it. For some reason, my 2 grandfathers came into my mind…That they somehow walked home from the battlefields in the Second World War. And I told myself, if they could make it, you have to make this as well.”

Gyurta is also entered in the men’s 1500 free, which isn’t until the end of the meet: prelims on July 27th and finals on July 28th.

He was having an amazing swim especially with the conditions. Long clean strokes cutting thru the waves and chop with no sign of fatigue with a 90 second gain in a lap. At next feed was down to 30 seconds and talking to coach, but headed out. It was puzzling. It did not seem like he had hit an exhaustion wall as last stokes on camera were so clean. Nice to understand what happened and hope the best for him in the future.

Could not agree more… he as going to crush the field. Cleanest open water stroke I have seen, especially given the conditions. That surge hit put on in the middle of the race was stunning! Hope he finds another opportunity soon to take care of unfinished business. Nice effort by that swimmer! Love that quote about his grandfathers.

I’m sure his grandfathers would agree too

Impressed he finished in the circumstances. Goog for him. Such a shame this happened as he looked like the winner.