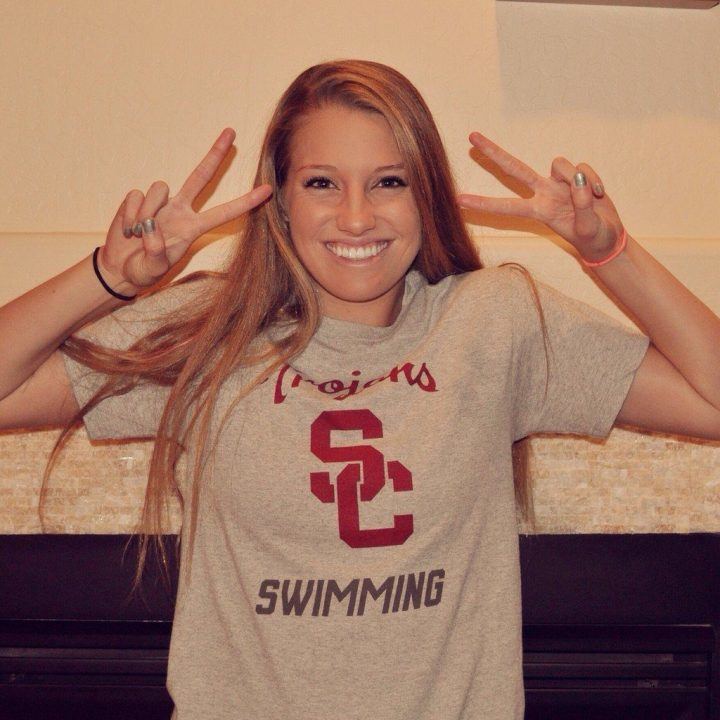 The top recruit in the state of Arizona Victoria Toris has verbally committed to the USC Trojans, she announced late Tuesday night. Toris is the two-time defending Arizona State Champion in the 50 and 100 yard freestyles for Pinnacle High School.

The USC Trojans are building a huge class, and a very well-rounded class, that hits about every one of the program’s needs. Also committing on Tuesday was Olympic trials qualifier Destiny Nelson.

Among the Trojans’ biggest holes heading into next season was sprint freestyles, after graduating Kasey Carlson, and with the additions of Toris, Allie Wooden, and Olivia Ontjes, that group now has its building blocks for the future.

Toris comes from the Scottsdale Aquatic Club sprint group that has had a lot of success in the last 3-4 years. In short course, she stayed steady as a junior (including a small drop in her 100 free), but Toris struggled in long course in the summer. She has remained up-beat, though, heading into her senior season, telling AZCentral.com recently that her plan is to “practice more on her longer distances to get better at her shorter distances,” though that might be counter to Dave Salo’s race-pace style of training.

She chose USC over Arizona, UCLA, and Tennessee. In September of this year, she said she had left the door open for a 4th trip, and USC – which she didn’t name at the time – was a late-comer and the winner in this sweepstakes.

Very cool for you, Victoria! Congratulations and best of luck.

Congrats and welcome to the Trojan Family! You are a great addition to the sprint group at USC and we know great things will come with Trojan training. Looking forward to seeing you swim at AZ HS States in 3 weeks when we know you will break the 50 & 100 yd records! You are joining a great class of other commits from all over the country! Fight on!

Congratulations to another fine Arizona swimmer. Victoria will be a great addition to the USC squad. Great competitor and have enjoyed watching you swim for SAC over the last years. Best Wishes