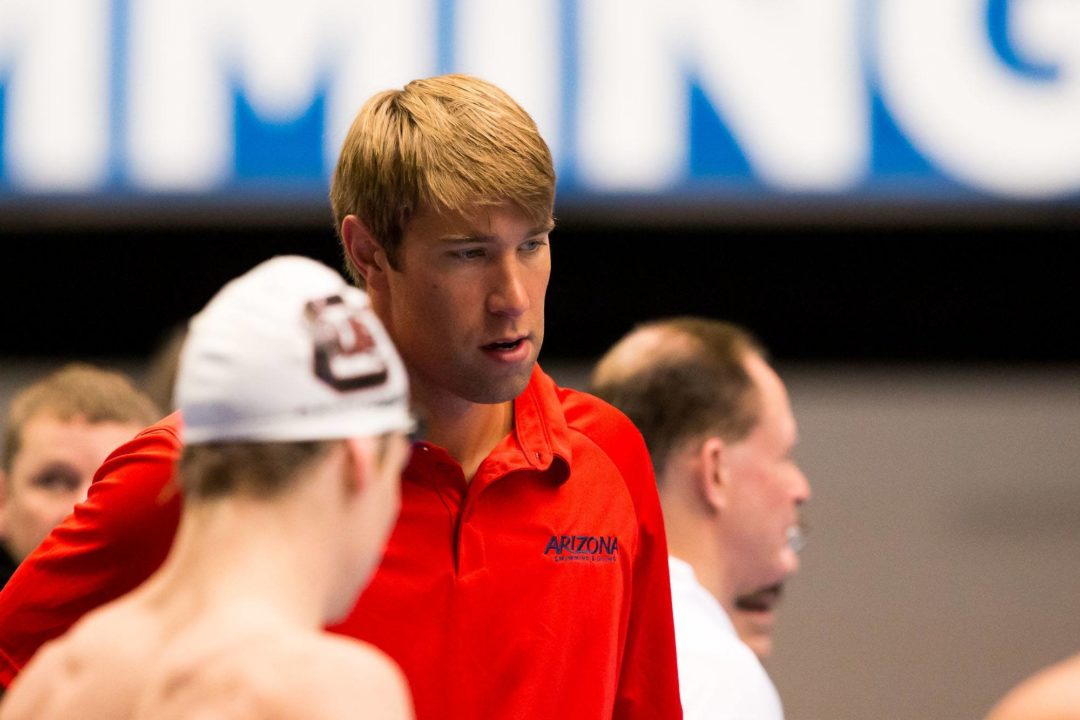 Matt Grevers (above) will return for a second season as a volunteer assistant, and will be joined on deck by Adam Byars and Wes Lagerhausen. (Photo: Tim Binning/TheSwimPictures.com)

The University of Arizona has announced two new members, and one returning volunteer, for their 2013-2014 coaching staff, head coach Eric Hansen confirmed and informed his team of today.

The new full-time assistant will be Adam Byars from the Aiken-Augusta Swim League straddling the state line between South Carolina and Georgia, and he will be joined by volunteer assistants Matt Grevers and Wes Lagerhausen.

All three have swum under or around Hansen’s teams in their impressive careers.

Byars will join the staff on a full-time basis after spending the last five years as the Program Director and head coach of the Aiken-Augusta Swim League, after two years spent as the Head Age Group Coach. Among his best-known products are Texas A&M standout sophomore (to-be) Katherine Huff, who scored NCAA consideration cuts in the 100 back and the 100 fly. He also coached Georgia Tech NCAA Championship qualifier Eric Chiu; and Steven Kekacs from Harvard, who was 3rd in the 1000 free at his first Ivy League Championship in 2013.

“Adam is a great coach and person that will contribute a great deal to our continued progress,” Hansen said. “We are extremely excited about having Adam on deck and all that he will bring to the program.”

Byars was a captain of Hansen’s team at Wisconsin, a 2001 All-American as a senior, and the team MVP that same season.

The other two members of the staff announced for next year include the Olympic Champion and second-fastest 100 meter backstroker in history Grevers, who will take on his second season as a volunteer assistant for the program while training at the campus-hosted Tucson Ford Aquatic Club.

Lagerhausen is another former Wisconsin captain, though much more recently – he completed his eligibility under Whitney Hite after three years under Hansen. Lagerhausen was a sprint freestyler, placing 15th in the 50 and 18th in the 100 free at the Big Ten Championships his senior year.

The three will combine to fill the spot left open when Associate Coach Geoff Hanson was relieved of his duties earlier this year.

Way to go Adam! Adam coached me the past six years before I went off to college and he really helped me develop into a better swimmer. My recent success can be attributed to Adam’s coaching. I can see him doing really well at Zona and I’m happy for him and his family. Congrats Adam I’ll see you on deck at NCAA’s!

Adam is a great coach and ASL wouldnt be where it is now without him-My daughter didnt start swimming until she was 14 and is now swimming at Georgia Tech. I kept wondering when he would make this move and I am happy for him!

Great new coaching additions!! Has there been an update on Coach Geoff Hanson?